Shagging the Night Away 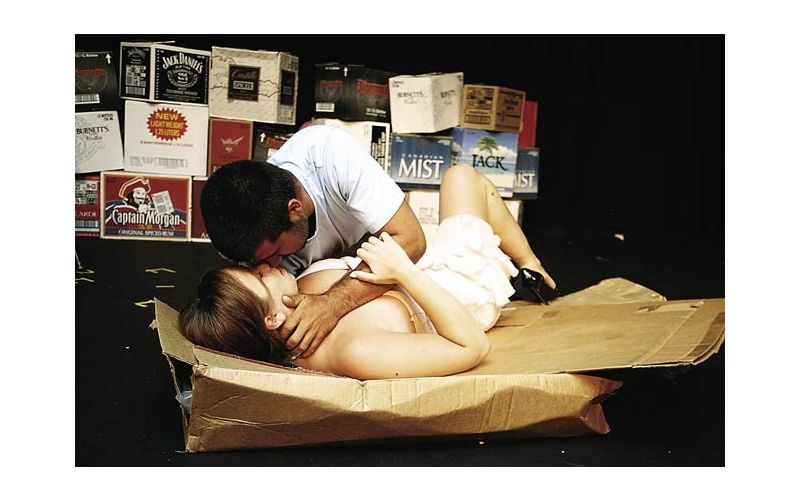 Nicole Kidman’s naked buttocks are not enough, you would think, to launch a Broadway show. But in 1998 they did just that. Kidman was the star attraction of The Blue Room, playing five different characters. Critics concurred that the play, a British adaptation of 1900’s Der Reigen, was average at best. Yet audiences still flocked to catch an all-too-brief glimpse of Kidman’s buns, making the production a hot and heavy hit.

Hanahan-based production company Theatre /verv/ doesn’t have Nicole or a Broadway budget (or any budget for that matter), so they’re left with the text, a series of 10 intimate scenes that explore sexual desire, infidelity, and the way relationships are different depending on the age gap. In each scene there’s a couple, then one of the pair joins another partner for the next scene, linking disparate narratives and settings. The result is disjointed; short, anemic scenes knock boots with longer, deeper philosophical ones. The vignettes develop the characters as much as they can within the space of five or 10 minutes, and we do get to know them quite well. But there isn’t much room left for a story — it’s boy meets girl, then the girl meets another boy, then he meets a girl and so on for an hour and a half.

Director and company founder J.C. Conway has taken great pains to spice up the action, creating some involving drama that’s as fast-paced as the talkative text allows. Half of the scenes are videotaped and projected on a screen; the other half are staged.

By alternating screened and live pieces, Conway shows the actors’ strengths and weaknesses. Actors Ben Meelan (the Cab Driver) and Justinh Avery (the Student) are more comfortable on stage. Others, like Jelena Zerega (the Married Woman) and Jesse Budi (the Aristocrat) are particularly photogenic and come across best on film. It’s a real challenge for the actors to make an impact in both media while maintaining a continuity of character from one scene to the next. For the most part, the cast meets that challenge.

Video director Mark Gorman makes the most of his format so that it’s not just a gimmick. He uses lots of close-ups and hand-held camera moves, telling the story in ways that a live performance cannot. He doesn’t use much artificial light, suggesting a dark demimonde of sex-hungry strangers. Sadly, that means we can’t always see the actors’ eyes or faces, the key to creating an emotional connection with them. In other moments, porn movie dialogue that might have worked on stage sounds silly on camera. “It’s so hot,” says the Student, willing an au pair to strip for him. “My bra hurts,” says a model before she whips it off in her scene.

This version of The Blue Room has a lot going for it — capable performances, some subtle lighting, a restrained use of incidental music, and a cheery minimalism necessitated by the lack of coin. As with previous /verv/ shows, it highlights some talented, young actors; Katie Holland, Tishala Martinal, and Boogie Dabney are particularly memorable in their roles. But the production suffers from a detrimental devotion to the text. Playwright permitting, Conway and Gorman should not be afraid to tighten the scenes and adapt the British dialogue to fit their American cast. Around here, shagging means something completely different.