The Flowertown Players take on A Chorus Line

We Hope They Get It 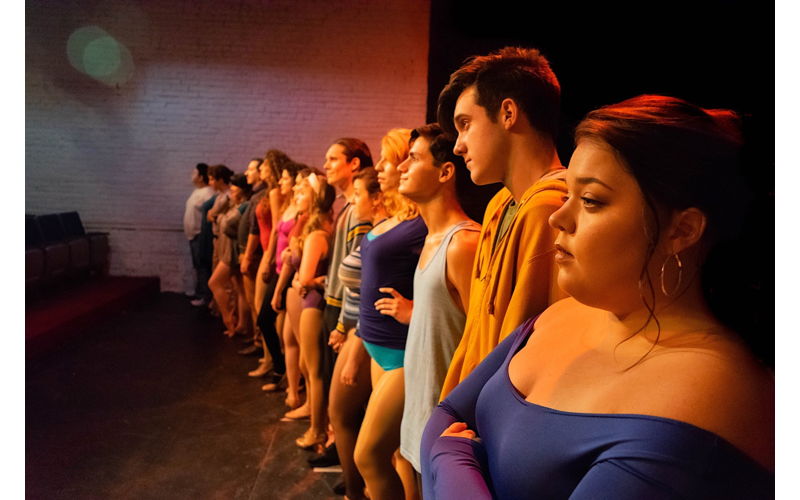 In addition to being one of the most venerable, oft-revived musicals of all time, 1975’s A Chorus Line is also one of the biggest. The multi-Tony Award-winning extravaganza, written by Nicholas Dante and James Kirkwood Jr. with songs by Marvin Hamlisch and Edward Kleban, tells the story of 17 hopeful young dancers trying out for the chorus of a Broadway musical. With a cast of nearly 30, it’s packed with well-loved, all-out musical numbers like “I Hope I Get It,” “The Music and the Mirror,” and “What I Did for Love.”

It takes a director with some experience to bring a show like that to life, and that’s why the Flowertown Players chose David McLaughlin to serve as director, choreographer, and musical director for their upcoming production of A Chorus Line.

“I’ve directed over 130 shows, including Hairspray and West Side Story, which are both really big shows,” McLaughlin says. “I do tend to direct the bigger dance musicals, so I wasn’t surprised that they asked me to do it.”

In fact, McLaughlin has even directed two other productions of A Chorus Line, making him an ideal choice from a practical standpoint. But he enjoys the musical on a deeper level as well.

“I have a lot of love for the show,” he says. “What I love about it is that all of the characters are based on real people. Everyone in the audience can relate to someone in the cast. Plus, the audiences get a peek into how the audition process works, and it hasn’t changed. I’ve been doing this for 30 years, and it’s exactly as it’s presented in A Chorus Line. So it’s totally relatable even today.”

A Chorus Line also raises the question of what a performer does when their days onstage are done, something McLaughlin can also relate.

“There are lines that talk about getting older,” he says. “And what do you do when you can’t sing or dance or act anymore? What’s plan B? Are you going to open a dance studio, or give it up altogether? Are you going to become a director or choreographer, which was my path? I think that’s timeless.”

The show had to be scaled back a bit for the Flowertown Players production, but McLaughlin says that it’s still an extravaganza of dancing and singing.

“The biggest thing was making sure I could fit 17 people standing shoulder-to-shoulder across the stage,” he says. “This is one of the more challenging dance shows we’ve done at Flowertown in the six years that I’ve been here. I wanted to stay true to the original choreography as much as possible while adapting it to the size of this stage. And I think we’ve accomplished it very well. It looks pretty grand.”

Interestingly enough, McLaughlin didn’t pack his cast full of experienced dancers for this production. He was perfectly happy to have a group with varying backgrounds and abilities.

“In this production, we have cast members who have never danced in their lives onstage, all the way up to performers who have been dancing their entire lives,” he says. “I enjoy that challenge. I like taking a variety of cast members and teaching them, helping them teach each other, and in the end creating a presentation to the audience where they have no idea who is at what experience level. We’ve got a cast that ranges from 15-years-old up to 40, so there’s a lot of experience and a lot of green cast members who have a lot to learn.”

McLaughlin says that the trick to managing that kind of a cast is to individualize his approach.

“I cater to everybody,” he says “We don’t judge. If you don’t know how to read music, that’s fine, we’ll use different terminology. When I’m teaching dance, I don’t use dance terminology because only one-third of the cast members would understand what a plié is.”

And in a very meta move, McLaughlin is not only directing the show, but he’s playing Zach, the tough, ruthless, and relentless director that the dancers are auditioning.

“It’s the first time I’ve ever done that,” McLaughlin says. “It was kind of fun in the audition process, because people were like, ‘Wait, are you in character right now?'”

The role of Zach is not an especially sympathetic one, at least until the very end of A Chorus Line, something that McLaughlin readily admits.

“I told the cast that the audience is going to hate me for pretty much the entire show,” he says. “Whether it’s because of the questions he asks or the way he interacts or how inappropriate he is. But I think that in the end, in the last monologue when he’s thanking the cast of the show and says he’s looking forward to working with all of them, I find that moment taps into the sincerity of the man. He’s grown to care about these people, and hopefully I can convey that in the last few lines of the show.”

Weekend Roundup: 30+ things to do this weekend in Charleston