The Fanatic, starring John Travolta, is really that bad 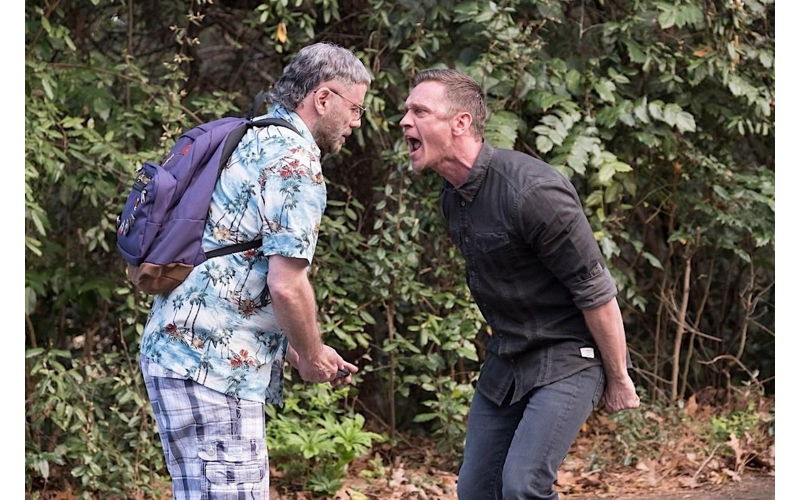 Those are the closing credits of The Fanatic. Reading those credits, one couldn’t help but triple chuckle. First chuckle goes to mega-star John Travolta who has been reduced to a VOD staple thanks to his numerous acting choices over the past decade — particularly last year’s Gotti. The second chuckle because he plays a man named Moose. The third chuckle is simply because of Limp Bizkit frontman Fred Durst. Both men have become veritable punching bags over the years.

The plot of the film is straightforward. Moose is obsessed with a star, Hunter Dunbar, played by Devon Sawa. He is friends with a paparazzi-type, Leah (Ana Golja), who enables him. A lot of awkward and potentially violent interactions between shitty human beings occur.

I was hoping that headlines declaring The Fanatic as an insane flop were overstatements. I was gonna try and give a compliment sandwich of this film, but screw it.

First, I’ll mention a nitpicky horror nerd quibble that has no bearing on the film whatsoever. In one scene, Travolta’s character threatens another character with chopping their head off like Freddy Krueger. Well actually Freddy Krueger wears a finger-knives glove. You may be thinking of Jason Voorhees. I’m sure Krueger has killed someone so bad that a head has come off at some point, but that’s not his raison d’etre. Just putting that out there.

So, in regard to Fred Durst. Despite the headlines that make it sound like he’s never directed anything, Durst has actually made two movies: The Longshots and The Education of Charlie Banks. Both movies were OK. There was nothing super-awesome about them, but nothing worthy of volcanic derision either. The Fanatic is capably directed I ‘spose, but he also co-wrote the film. That is truly the horrid part of the movie. Really.

“I can’t talk too long. I got to poo,” is the second line to come out Moose’s mouth. I think they’re supposed to be endearing and maybe even chuckle-worthy. As it stands, it’s a little off-putting. He also says such things as, “Don’t yell at me. You’re not my mom.” So that happens. A lot.

There are quite a few weary voice-overs from Leah. The film’s needless narration tends to come off more important and introspective than it really is. At one point, she says, “Moose didn’t just cross the line. He fucking nuked it.” The foreboding horns that play underneath are so on-the-nose heavy-handed and blunt that it comes off laughable.

The decisions and logical leaps made in the film are either stupid or some undiscovered next-level brilliance. There are drawings that break up the acts that may have had a point but, as it stands, it feels pointless.

Also, why couldn’t the hyper, angst-ridden nutjob just be some average schlub like Robin Williams in One Hour Photo? The craziness of fandom has been captured in better films. The Fanatic is so portentous and proud of itself in its observations and has no awareness of nuance or subtlety.

It’s weird ripping into this movie. On one hand it could have been a great cringe-inducing evisceration of the fan/celebrity relationship a la Martin Scorsese’s The King of Comedy and the Patton Oswalt vehicle Big Fan or it could’ve been a psychotic exploitation film like 1981’s underseen Fade to Black or the adaptation of Stephen King’s psycho-fandom classic Misery. It tries to be both and doesn’t succeed.

At the midway point, Hunter Dunbar and his son are going for a drive and are listening to Limp Bizkit. Maybe it’s meta on some level or maybe it’s just our director fellating himself. This film seems to have been written by someone who realized mid bong rip how weird and sycophantic the whole fan/celeb relationship is and because of that realization, feels they are the first to ever comment on it, much less bring it to light on film, the medium that creates celebrities in the first place.

Fred Durst, at the film’s outset, does get it right about fandom. We’re weirdos who can sometimes grossly deify celebrities, artists, and athletes counting on these mere mortals to fill the voids in our lives. And yeah, it’s really screwed up when one thinks about how much stock we place on these heavily managed personas. The veneer we see in interviews is all part of the game and, even though we know this, we still indulge in it on a daily basis to some degree. We know this but, The Fanatic thinks we don’t.

What can be said about Travolta? He’s a charismatic actor. When given a role, he seems to go all out. Even with a film like Gotti, he seems like someone who really cares about the roles he takes on. That in mind, it’s baffling how he thought his caricature-like take on the character of Moose was a good idea in 2019. It’s the reason the film may garner a “get-high/drunk-with-your-buddies-and-watch” status.

Holy shit, Devon Sawa knows how to play a shitty human being. Like Travolta, he seems to be giving his all. And like Travolta, it’s a shame his efforts weren’t rewarded with a better film.

This movie will likely make a lot of “worst of the year” lists. Maybe it’ll attain The Room standing. So, I guess that’s a positive.