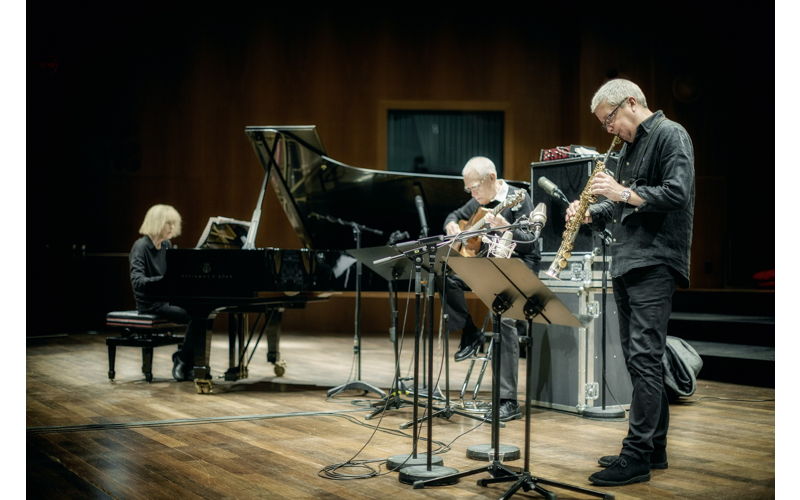 There’s very little that Carla Bley hasn’t done during her near-60-year career. In the 1960s, the pianist, composer and bandleader was one of the most important figures in the free jazz movement, standing with giants like Ornette Coleman, Pharoah Sanders and Cecil Taylor as they all explored the limits of what jazz, and music in general, could do.

She’s been awarded a Guggenheim fellowship, an NEA Jazz Masters’ award, and created a massive three-album “jazz opera” called Escalator Over The Hill that took three years to make. Her compositions have been recorded by some of the best players of the last 50 years, including guitarists John Scofield and Leo Kottke, trumpeter Art Farmer, and bassist Jaco Pastorius. And she’s worked with big bands, stripped-down duos, and virtually everything in between.

But something special and singular happens with Bley gets together with her collaborators of nearly 30 years, bassist Stephen Swallow and saxophonist Andrew Sheppard. Their musical conversation has gone on for so long that it can almost be viewed as a marriage, something Bley jokes about when talking about their performances.

“The three of us have been playing together for nearly 30 years and, like an old married couple, we finish each other’s sentences as we improvise,” she says. “Music is indeed language, and over time, Andy, Steve and I have become most comfortable together. We’ve learned to breathe together when we play.”

That level of familiarity doesn’t just benefit the trio’s performance; it benefits Bley’s writing, as well.

“Familiarity has a strong effect on the music I write for the trio,” she says. “I hear our voices in my mind’s ear as I compose for us.”

There’s also a certain freedom that Bley, Swallow, and Sheppard have in their playing because the makeup of their trio is so unusual. Without a drummer, they can explore all manner of space that blurs the lines between jazz and classical music, something Bley has done for much of her career.

“I especially relish the conversational flow the trio format allows,” she says, “and I think the absence of a drummer might enhance that aspect of the music. We’re essentially a chamber music ensemble, and this allows me to write music for us free of bombast and exaggeration. Music stripped down to its basic elements. This format also demands that as players, we improvise in the character of each particular song, which is both a challenge and, on a good night, a great satisfaction.”

Whether the night is good or not, improvisation isn’t as big a piece of the puzzle as one might think. As a major figure in free jazz, one might think that Bley enjoys the idea of working without a net, but she’s quick to point out that this trio is a “composer’s band.”

“We know more about what’s going to happen when we walk onstage than many other jazz bands,” she says. “There’s a set list of songs, and we follow it. Each song is a fixed structure.”

The fun comes within the structure, when the trio begins to bob and weave around one another. When Bley talks about that part, the adventurous boundary-breaker in her comes out.

“We love to surprise each other,” she says, “and tug at the limits of form. Ideally, the writing propels us to places we haven’t visited before. We’re always looking for new ways of seeing a piece.”

The “Trios” program at Spoleto will be a mix of old and new. There are actually some pieces they’ll be playing that haven’t been fully fleshed out yet.

“Our concert is a combination of new, not-yet-formed pieces, and ones we’ve played many times over the years,” Bley says. “Paradoxically, it’s often the familiar pieces that are most drastically remade in performance. That reflects my interest in the past: It may be useful in making a better future.”

For Bley, creating material that challenges those performing it is more than just an artistic pursuit, whether she’s playing her compositions, or another artist is taking them on.

“I’ve come to appreciate performances of my music by players of strong personal conviction,” she says. “Performances that honor the spirit more than the letter of what I’ve written. And of course, it’s difficult to lay exclusive claim to spirit. Writing music for improvising musicians should perhaps be seen as service occupation.”

With the Carla Bley Trio, a jazz legend’s gravitas descends on the Cistern