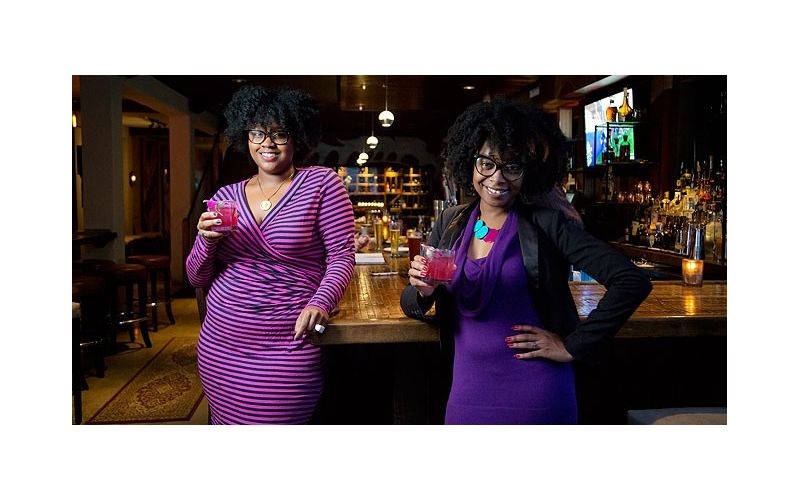 We'll Drink to That

It’s not hard to spot Johnny Caldwell and Taneka Reaves at one of the numerous cocktail events around town. Dressed in their signature pops of color, stripes, and polka dots, the friends’ style makes a statement wherever they go. But that’s not the only reason they stand out.

“When we go out, often we’re the only people of color,” says Reaves.

And that’s why the women started Cocktail Bandits: a blog and column in The Chronicle all about “Curly ladies who talk cocktails daily!”

“We feel an obligation to report on an event from our perspective,” explains Reaves. In a city that’s 31.6 percent minorities (according to the 2013 Census), one can understand why sometimes the Charleston bar scene feels awfully white. And Caldwell and Reaves have had to face that head on.

But the women, who became best friends on their first day at College of Charleston, had to break some barriers of their own first.Suffice it to say, Caldwell and Reaves families weren’t exactly thrilled when the two announced they were going to make a career out of drinking.

“My family is very religious. I’m not, they are. And they were like, ‘Oh my God. You’re just getting drunk every day?'” explains Reaves who’s from the small South Carolina town of Mullins.

For Caldwell, who grew up in Mt. Pleasant and attended Charleston School of Law, there was similar push back. “My family wasn’t open to it in the beginning,” she says. “I spent a lot of time and money and energy going to law school and to not be a lawyer practicing wasn’t easy for them to get over.”

But when their families began to see the Cocktail Bandits growing success — 500+ Facebook fans, over 2,000 Instagram followers, and event planning contracts with Crown Royal and Courvoisier — they began to change their minds, about both the job and the alcohol.

“Now they all drink,” says Reaves of her family. “I go home and make little punch bowls. They love it now.”

The key, they say, to winning over both their families and followers has been education. “In the booze industry, you only see strong powerful men, but we want to see women,” says Caldwell. “The promo girls are like half naked. They don’t know the product at all — they’re the bimbo types. There’s a place for that, but there’s also a place for the educated female craft-cocktail aficionado.”

And spreading the word on the best drinks, recipes, bartenders, and events in Charleston is now both Caldwell and Reaves full-time job, in addition to their entrepreneur networking business, Movers and Shakers Mix.

“Each morning we get up and do the front end and back end for the blog,” says Caldwell. Next, the women update all their social media channels with posts from what they did the night before. For instance, for Charleston’s Repeal Day festivities, the partners posted a YouTube video of all their stops and drinks, from Proof’s Brooklyn Manhattan to Prohibition’s Nameless Granddad.

Curly ladies Who Talk Cocktails DAILY!! Shout out to Rosè @courvoisier. We passed out some sample shots over the weekend and the ladies LOVED it! This liqueur is perfect mixed with Champagne. 👌🍸 #cocktailbandits #curlyladieswhotalkcocktailsdaily #clwtcd #rosè #courvoisier #passthecourvoisier #liqueur #booze #drinkingladies #shotgivers #butnotdoctors

After working out, making lunch, and handling emails, the women are out the door by 6 p.m. nearly every night to attend a cocktail event or tasting.

“We always say yes,” says Caldwell of the numerous invites that flood their inbox. “Women aren’t supposed to yes, but you have to make every contact and shake every hand to make a name for yourself.”

It’s a strategy that’s worked. The Cocktail Bandits endeavor started two years ago, incidentally, with a copy of the City Paper. “We’d look at City Paper every week, we’d go through the events, and say, ‘We’ll go to five or six,” recalls Reaves. “At first people wouldn’t pay us any attention, but then we started going to so many events, it was like ‘Oh, they’re everywhere.'”

That’s when their general appreciation for going out transformed into a passion for mixed drinks.

“I was going through a crossroads in my life trying to figure out what to do,” says Reaves. “And I was like, ‘I love liquor, especially tequila.’ I thought, ‘What’s the worst that could happen? You learn everything about it and then you’re an expert? That’s the worst?'”

The women began educating themselves on all the nuances of the blue agave spirit, and while trying to find YouTube videos and blogs from women like themselves, they came up short.

But they’re working to change that. Caldwell and Reaves recently met The Essential Cocktail author and master mixologist Dale DeGroff and have plans for a personal tutorial when the cocktail king visits again in May. Most importantly, the Cocktail Bandits are attempting to show Charlestonians, all Charlestonians, that there’s room at the bar for everyone in the community.

“A lot of people don’t feel they have the right to go out,” says Reaves. “We say, you work hard, go out and enjoy yourselves.”