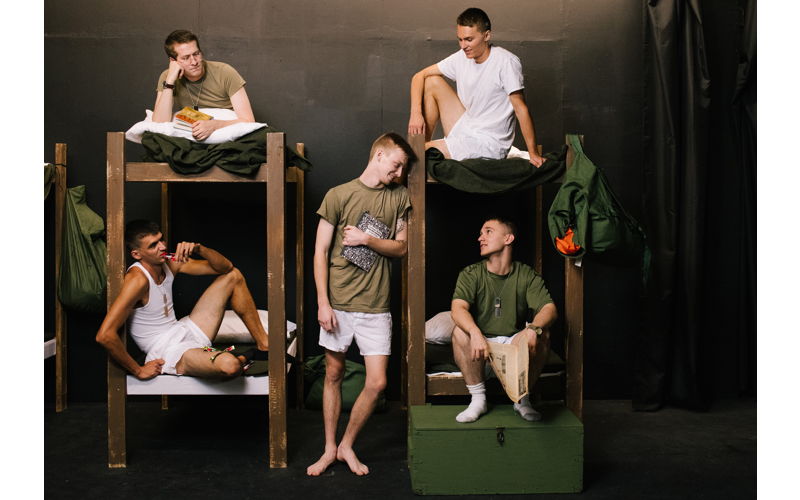 If playwright Neil Simon’s semi-autobiographical play Brighton Beach Memoirs is his Star Wars, think of 1984’s Biloxi Blues as his Empire Strikes Back. The play, set in 1945, tells the story of young Brooklynite Eugene Jerome and his thorny relationship with his tougher-than-leather drill sergeant Merwin J. Toomey at boot camp in Biloxi, Mississippi.

Biloxi Blues is certainly funny in places; it is a Neil Simon play, after all. But it’s also the most dramatic story in Simon’s Eugene Trilogy, serving as a coming-of-age interlude between the nostalgic tale of Brighton Beach Memoir and Broadway Bound, the final installment.

The military is the main subject of Biloxi Blues, so it’s appropriate that The Citadel’s fine arts program and the South of Broadway Theater Company produced the play, directed by Citadel alum and acting coach Bob Luke.

Luke spent much of the last few decades serving as an on-set coach for films including Ransom, Racing Stripes and Enchanted. This is actually his first time working with The Citadel’s program, but South of Broadway founder Mary Gould was a client of his in New York City.

“Anytime you get to direct Neil Simon, it’s a good day,” Luke said. While he’s a fan of Simon, the director mentioned that he has not seen a live production of Biloxi Blues.

“I had to grab a copy and read it to see if I thought it was strong enough,” he said. “I’d seen productions of the other two; it was kind of interesting to fill that void in the middle … There’s some heavy-hitting drama to [Biloxi Blues], and that calls for some strong performances by the guys who are playing those roles.”

That means that the casting process was critical for the play. “The casting is 90% of the success of a production, and with that comes a lot of luck,” Luke said. “If you catch that right person who understands the character, you’ve been really lucky with it in a lot of ways.”

In this case, the right people are Evan Fondren as Eugene and Arthur Rich as Sgt. Toomey. Fondren had his own set of challenges to overcome in Biloxi Blues, according to Luke.

“A little bit of a trap with Eugene is that he has to maintain that innocence,” he said. “And when you’ve gone over the script and the lines and you know where the story’s going, it’s easy to become a little too knowledgeable or mature about it. You need to maintain that sensibility, because the humor is that of a man who is caught by surprise.”

“He was recommended by one of the cadets from The Citadel,” Luke said. “We were a little concerned about who to get, and I was thinking I might have to bring somebody down from New York. But, Sgt. Rich, he’s tough as nails. He’s exactly what this guy should be, and he really puts in the effort.”

Eugene and Sgt. Toomey will go at it with three performances scheduled for Halloween weekend.

“We were set to go on March 20,” Luke said, “then The Citadel ended up closing. It’s been seven months, and we’re back in a three-week rehearsal period to warm it back up. We’re revving ahead for Halloween weekend; we should be in great shape.”