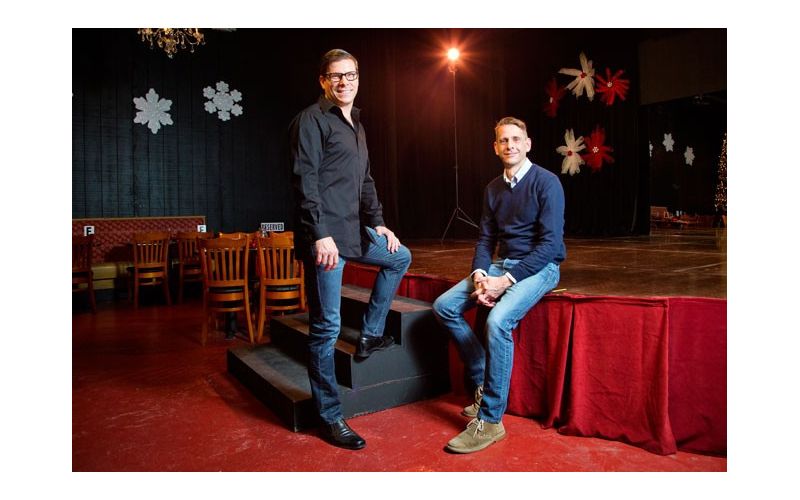 A few months ago, a new school quietly opened its doors in the heart of James Island. With only seven students — five adults and two teens — and a host of talented faculty members, they set out with a single goal: to bridge the gap between Charleston and Broadway.

And now they’re about to get really loud about it.

The Charleston Performing Arts Center (or C-PAC) is the brainchild of performer Kirk Sprinkles — whose Broadway credits include Radio City’s Christmas Spectacular, Oklahoma, Fame, A Chorus Line, and many others — and corporate executive Scott Pfeiffer. They want to provide a service to actors, dancers, and singers here in the Lowcountry. Their plan? To establish a school that offers classes to hone performers’ skills in all areas of musical theater, making students more marketable and employable in theaters around the country (and, most notably, Broadway).

To do so, Pfeiffer and Sprinkles have assembled a crack team of instructors, including choreographer/dancer Caitlin Carter, and Stephanie Samaras, who teaches at NYU and Montclair State University in New Jersey. Samaras has also provided instruction to Jennifer Garner and the late Patrick Swayze.

In their inaugural semester, C-PAC is already offering a full list of classes, including acting, history of American musical theater, musical theater dance (which comprises jazz, tap, and ballet), dance conditioning, vocal performance, and vocal technique classes. “It is not an a la carte program,” Pfeiffer says. “All students take all courses. Musical theater is where all art forms coexist — therefore it’s critical that singing, dancing, and acting are given equal importance and focus.”

The classes are all pre-professional level for both adults and kids and are designed to enhance skills that already exist. Students must audition as part of the admissions process, and the cost is $250 per month for the duration of the semester.

But that’s not all they’re offering at C-PAC. “Kirk also knows that when he was young, he didn’t have the mentorship and guidance and the business-end insight to tell him the steps he needed to take, the pitfalls to look out for, the approach for you based on your talent,” Pfeiffer says. “You know, it’s the advice like, ‘Don’t go out for Newsies if you’re not a great tapper.’ Don’t set yourself up for failure.”

So the conservatory will provide this advice and knowledge to its students, giving them insight into the business of Broadway as well. Current C-PAC student Randolph Middleton, who is in his 20s and has been performing locally for five years, says “Without [C-PAC’s teaching], it would be severely difficult to both compete and succeed at the level that is expected and now required of any performer who wants to pursue a career in the performing arts.”

Middleton enrolled in C-PAC because he was impressed with the caliber of the faculty. “What attracted me to the Charleston Performing Arts Center was the endless possibilities and wealth of knowledge from people I trust, who have been where I am going,” he says.

While C-PAC has only been open for a few months, this isn’t the founders’ first time working with the Charleston theater community. Last summer, Pfeiffer and Sprinkles hosted their first New York City summer intensive program. The two took 20 students to the Big Apple for seven days of immersion in theater classes and performances. Pfeiffer and Sprinkles are already planning another intensive for the summer of 2015.

They also plan to bring Broadway headliners down both to perform in C-PAC shows and to teach shorter workshops throughout the year. Last month, one-legged tap dancer Evan Ruggiero, who’s been featured on The Ellen DeGeneres Show and American Idol, came down to perform at the school’s opening gala. He also taught two master-level classes.

“The first was a pop/rock audition technique class,” says Ruggiero. “The students were able to focus on singing current and past rock songs, and to work on their acting throughout the song.”

The second class was less traditional. “My second was a Peg-Leg tap class, where I taught the students how to dance by only using their left leg, and then using their right leg as a ‘peg-leg,’ Ruggiero continues. “They were able to achieve this by using only the heel of their right leg to simulate having a peg leg. They loved it.”

In the next several months, the school will increase its marketing, bringing word of their gospel to a broader population via partnerships with other local arts businesses — they hope to partner with the School of the Arts and the College of Charleston, among others — as well as via their upcoming productions. In addition to musicals, they stage old-fashioned burlesque shows from different decades of American pop culture.

As C-PAC broadens its reach, Pfeiffer and Sprinkles will be able to offer courses in set design, lighting, and sound, and provide mentorships — and hopefully scholarships — for their students moving forward.

The Charleston Performing Arts Center is a non-profit and is currently accepting donations. Find out more at charlestonperformingarts.org.