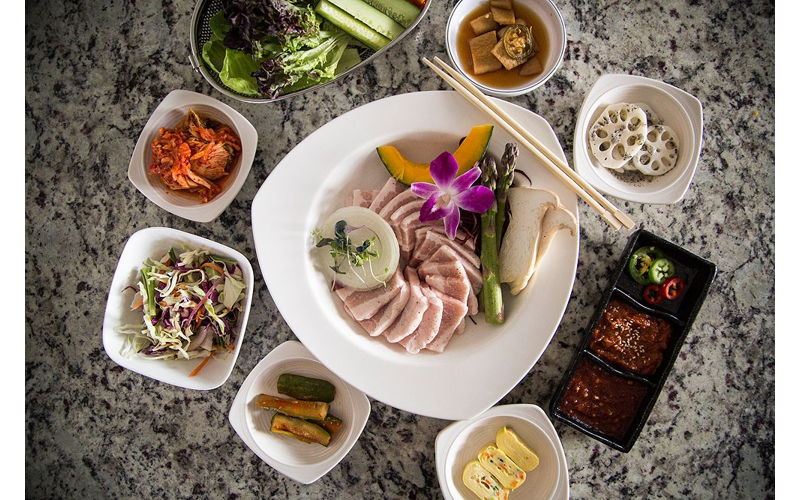 If your knowledge of Korean food starts and stops at kimchi, then 843 Korean in North Charleston is likely to expand your culinary horizons while providing some wholesome, G-rated, live entertainment. If you know the difference between ssamjang and gochujang and when to use them, then consider this Korean Lite, which is to say, authentic with training wheels. All told, 843’s menu offers an expansive selection of relatively approachable Korean dishes, plus a varied array of sushi rolls.

Case in point, the hamuel pajeon ($15). Highly recommended by the server, the traditional, heavily battered seafood pancake is chock full of green onions and small shrimp and arrives lightly fried. Bland, but comforting, it’s accompanied by a ponzu dipping sauce that alleviates the doughiness, highlights the crisp coating, and evokes a tasty “fish and chips”-type quality.

In contrast, the spicy rice cakes ($10) are not what anyone alive during the low-fat, high-carb ’80s would consider a rice cake. Like udon on steroids, the thick, chewy noodles are combined with onions, thin slices of fish cake, and a hard-boiled egg, which is then tossed in a chili-sesame oil sauce. The dish is unusual by Western standards, but the dense, gnocchi-like rice noodles are virtually flavorless which is an ideal foil for the thin, fishy strips and spicy, yet slightly-sweet sauce.

843 Korean also offers a wide variety of sushi rolls and the like, ranging from the predictable to the downright avant garde, as the menu’s substantive list of original creations regularly think outside the rice and/or nori box. The Outrageous Tuna Sashimi Roll ($11.50) is appropriately named, with spicy tuna, edamame hummus, and an asparagus spear wrapped inside thinly sliced ahi. It’s light, elegant, and visually striking. Meanwhile, the eel avocado maki roll ($7) was everything you’d both want and expect from the genre, suggesting the other traditional rolls might prove solid choices, as well.

But did you really come to a Korean restaurant to eat sushi? I didn’t think so. And that’s why the seafood soft tofu stew ($16) — comforting, bubbling bowl of flavorful broth filled with clam meat, mussel meat, shrimp, and a block of soft tofu, topped with a raw egg — sounds so compelling.

Let’s break it down.

Bubbling? Not even remotely.

Clam meat, mussel meat, and shrimp? The four, in-shell Manila clams, two bay shrimp, and a few pieces of squid tendril about the size of a sunflower seed felt a bit scant.

Block of tofu? Present, accounted for, and acting as the veritable gorilla in the bowl.

For such a promising-sounding dish (and despite the rich and very spicy broth), this tofu soup concoction was a pricey disappointment.

Happily, the bi bim bap ($15) stays with the tried and true. On point, a mound of rice is served in a warm stone bowl and topped with strips of bulgogi ribeye and a raw egg. That’s accompanied by a vegetable medley of shredded carrots, bean sprouts, and sliced cucumbers, as well as sliced onions and sauteed spinach. Some of the more robust ingredients — bracken ferns, gochujang chili sauce, laver seaweed — don’t make the cut, but sesame oil and a thin chili sauce were later added by our waitress as she mixed the bowl together on my behalf, presumably a move to insure I experienced it properly.

The location was formerly the site of a Carey Hilliard’s Restaurant, and as my dining companion said upon arrival, the change in style felt like “walking into your grandma’s house to find that someone has redecorated everything.” There’s an unexpected nightclub vibe stepping into the long, dark entryway. My eyes adjusted to take in the twinkling lights and a disco ball overhead. Despite the K-Pop soundtrack, the dining rooms are far more understated with either cloth-covered tables or in-table stainless steel grills (where a minimum of two meats must be ordered).

Service is hit or miss, with the aforementioned minimums as well as item availability seeming to vary from table to table. Where my first waiter was young, inexperienced, and awkward, the second was polished and professional… until she offered me a $5 sushi discount for writing a 5-star Yelp review. Oof.

Regardless, if you order the barbecue, your server doubles as chef, preparing the meats in the center of the table as you watch. The “Honey Pig” samg yeop sal (campart duroc pork belly, $20) sent my imagination aflutter, but what proceeded didn’t quite live up to the name. Specifically, some onion, squash, and mushroom slices are thrown into the grill pan along with thin squares of unseasoned, unmarinated pork belly. After a hard searing and some friendly chitcat with the waitress, the flavor nevertheless was that of a plain porkchop.

Similarly, my waiter’s enthusiastic endorsement of the kot deung shim (prime ribeye, $29) remains a mystery. Once again, mushrooms, onions and squash start the show, but this time the thin, fatty (unseasoned) meat was treated to the addition of a copious helping of fresh rosemary. For a cuisine known for its aggressive seasoning, it’s hard to fathom these recipes. It’s also hard to eat them, and the cut-into-tiny-bites-for-you ribeye was reminiscent of something made by a well-intentioned friend who doesn’t really know how to cook, but insists on it anyway.

Happily, the bulgogi ($19) is a 180-degree shift from the lackluster meats before it. Sweet and nuanced, the tender beef was deep with flavor. The clouds lift, the confusion clears: This is why you came to a Korean barbecue.

Well, that and the banchan (a.k.a. side dishes). While the ubiquitious sides aren’t provided with every meal, order barbecue and they soon fill the table. Cucumber kimchee, fried anchovies, Kongnamul muchim (seasoned soy bean sprouts), and other classics accompany pickled daikon and steamed eggs with vegetables. This is where the uninitiated will find the more traditional offerings, and the kimchee in particular was outstanding.

Still, there are kinks to work out, and although you may hear it playing overhead, 843 Korean is not quite full-on Gangnam style. Stick with the marinated meats or classic dishes, however, and this could prove a reliable choice for a fun first date or otherwise adventurous night out.

Sally & Georgew/ Sol Driven TrainSat. Oct. 316 p.m.$27.50-$110Firefly Distillery The singing duo Sally & George, a vagabond band on the verge of releasing its second LP, Take You on a Ride, has been making a name in the Americana world, traveling around the country and living out of a tour van.  The outfit is […]