The Book Thief fails to find true meaning in its subject 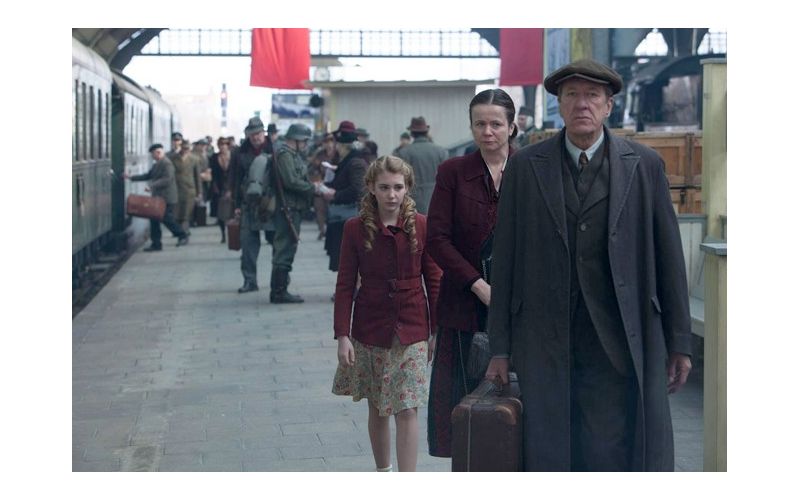 Call me a curmudgeon, but Markus Zusak’s popular novel, which the movie The Book Thief is based upon, is little more than a safe, PG-rated watering down of the horrific events that took place in Germany leading up to and during World War II.

That said, the film adaptation of Thief has much in its corner. Brian Percival, the hand behind the hit PBS series Downton Abbey, directs and Academy Award winner Geoffrey Rush and Academy Award nominee Emily Watson head the cast. Unfortunately the material, while earnest, is beneath them and Percival at times seems a bit befuddled by the larger world of film. It doesn’t help that his ability to string together tight, cloistered moments of intimacy, which work so well on the small screen, gets compromised in this grander, more urgent framework.

For all intents and purposes, western Europe could be Middle Earth and the Nazis orcs, as they are all essentially grotesque minions performing their bloody tasks sans remorse and often with a trace of glee. The imperiled heroine driving the plot comes in the pint-sized form of Liesel (Sophie Nélisse), a young, curly-locked waif embossed with wide wondrous eyes who, on the run with her mother who’s an accused communist under scrutiny, is turned over to the tart-tongued Rosa (Watson) and her reserved husband, Hans (Rush) for foster rearing.

Much of what we learn about Liesel is told to us in ominous voiceovers by Death, who admits he is smitten with the girl as he pays a visit to the fleeing family aboard a train to claim her younger brother. Why Death is so infatuated with Liesel is unclear, but our notorious and unseen narrator speaks with avuncular charm as if this were a Christmas tale (voiced by Roger Allam) and calmly assures us with his sagacious omniscience that all is as he says it is. It’s easily and wholly believable, despite the unnerving nature of the narrator.

The film’s title stems from Liesel’s penchant for pinching books, which is surprising considering she can’t read and is routinely chided at school for her developmental inadequacy. Early on she nips a gravedigger’s manual, and later pilfers books from the library of a Nazi commandant whose wife has taken a liking to Liesel. Hans catches onto Liesel’s activity and the pair forge a bond during covert candlelight reading sessions. Rosa too begins to soften, but the nascent familial unit is challenged when they take in Max (Ben Schnetzer), a Jewish refugee whose father saved Hans’s life during the first World War.

Nélisse, who looks something like Emma Watson from her Harry Potter years, handles her role well. She’s solidified by (Emily) Watson and Rush, who go a long way to mitigate the film’s maudlin air-brushing of a horrific time. The film also does well in portraying Liesel’s complex affections for the older Max and her towheaded classmate, Rudy (Nico Liersch).

In the fantastical distillation of events and atrocities, much of the outside pressure comes from basement sweeps for Jews by friends and neighbors now serving the Fuehrer and Brown Shirts who bully the fleet-footed Rudy for idolizing Jesse Owens. The cinematography by Florian Ballhaus (Devil Wears Prada) is artistic and opulent, especially the stunningly stark opening sequence as a black train (and later, a black limousine) travels through the snow-covered countryside. The metaphor for innocence and darkness is conspicuous, but it’s beautiful to behold nonetheless.

For what it is — a foot in the door of Ann Frank’s world —”Thief” may pay dividends if it channels young viewers to Wikipedia to review history and fact. Other films that have played loose with the record, like Life is Beautiful and Inglourious Basterds, have done well by deepening the understanding of the horror and inhumanity. The Book Thief, unfortunately, is a heart-string pulling yarn ostensibly spun for the marketplace that employs the world-changing war as a plot driving backdrop. It’s shameless artifice and because of that, any true meaning is lost.