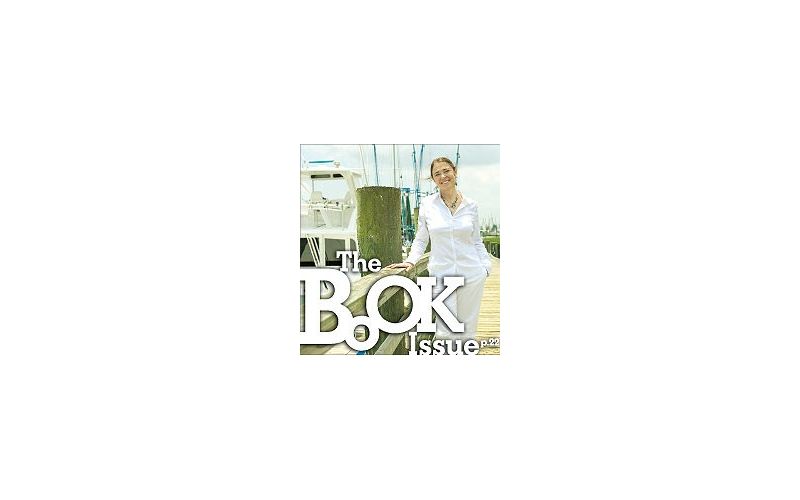 Even though summer’s about halfway through at this point, there are still a helluva lot of days left to spend at the beach. This is Charleston after all.

And that means that you need something to do when you’re baking on the soft sand. Yeah, you can drink a few brews or play some bocce — good things both — but most folks seem to enjoy reading a good book. Which is where
we come in.

In this section, you’ll find more than enough recommendations to keep you reading the rest of the summer — as well as a warning or two about the duds you need to stay away from. Enjoy.

Mary Alice Monroe always has an idea for a new novel. In fact, the celebrated author says that in her mind she has an airport runway lined up with stories that have yet to be told, and as soon as one novel takes off, another lines up to take its place.

Based solely on Last Light Over Carolina, strangers to Mary Alice Monroe would hardly know she has not spent her entire life on the inlets and marshes of the South Carolina Lowcountry.

While Connie’s focus is on recovering Deliverance’s "physick book" — the handwritten compendium containing generations-worth of arcane prescriptions and healing techniques — in time, the search itself will reveal her own destiny.

… and how to avoid them

Forget playing in the surf or baking in the sun. The best thing to do at the beach is to kick back and spend the afternoon lost in a book. But don’t make the mistake of buying a novel that has a picture of an actual beach on the cover. Those books are not for you.

The seasons of their discontent

Both Susan Jane Gilman’s Undress Me in the Temple of Heaven and Lijia Zhang’s Socialism Is Great! offer — from wildly different perspectives — glimpses of China amid the early, fitful stirrings of the economic powerhouse which would in due course become one of our largest creditors.

The British seem to revel in making rash travel plans. It’s a long-standing tradition. Richard the Lionheart packing off to Jerusalem. Sir Francis Drake circumnavigating the globe. English comedian Tony Hawks taking up a bar bet to hitchhike around the circumference of Ireland — with a fridge — in one calendar month. All great stuff, and maybe a little daft.

Hothouse Flower and the 9 Plants of Desire

Lila Nova is a high-powered New York advertising executive who’s secretly getting a little tired of the corruption of her job. Lonely and ready to start afresh after a nasty divorce, she buys a houseplant from a charming botanist, little knowing that plants will very soon take over her life.

The Thing Around Your Neck

Chimamanda Ngozi Adichie has already made a name for herself with such novels as Half of a Yellow Sun. In her newest offering, Adichie has gathered together a dozen short stories, each by a single binding theme.

Portrait with Keys: The City of Johannesburg Unlocked

Ivan Vladislavic’s portrayal of Johannesburg, post-apartheid, shows a city riddled by crime, poverty, and the palpable division of race.

The Wauchula Woods Accord: Toward a New Understanding of Animals

You may not know this, but all those chimps you’ve seen over the years in movies, on TV, and at the circus, well, their years in front of the camera or in the center ring generally only last about half a decade. After a brief career as “actors” in their infant years, they simply grow too big and powerful — the average chimp is five times stronger than the buffest bodybuilder. So what happens?

In this latest book in Dorothea Benton Frank’s string of Lowcountry-themed novels, fans should get everything they’ve come to expect. Plenty of name-dropping of Charleston places and people, beautiful settings, steamy romances, and strong bonds between women.

The Center of the Universe

A new sub genre has emerged in the escapist realm of romance novels: stories where you have two strapping, broad chests instead of one. It’s gay tales of love and lust, but written by women for women.

The course of human conflict is often told in a broad sweep: massive resources and mobilizations brought to bear on an issue diplomacy has failed to settle and where provocations can no longer be borne. But as the air clears in war’s aftermath, it is often the individual stories and singular events that emerge as the most telling, the most resonant.

With praises from Josephine Humphreys (Rich in Love), Anne Rivers Siddons (Low Country), you would expect the debut novel from Charleston resident John Thompson to be a top-of-the-line read. But Armageddon Conspiracy is not.

The decision to begin reading the first book in a three-novel series is not one to be taken lightly, especially when the next two chapters have yet to hit store shelves. The potential problems of embarking such an endeavour are many, the least of which concerns an investment from the reader — as it concerns both money and time.

Wicked Plants: The Weed that Killed Lincoln’s Mother and Other Botanical Atrocities

At first glance, you may be tempted to throw this book on top of your “bathroom reading” pile next to the potpourri. We assure you, however, that Stewart’s well-researched and highly practical compendium of hair-raising botany deserves a closer read.