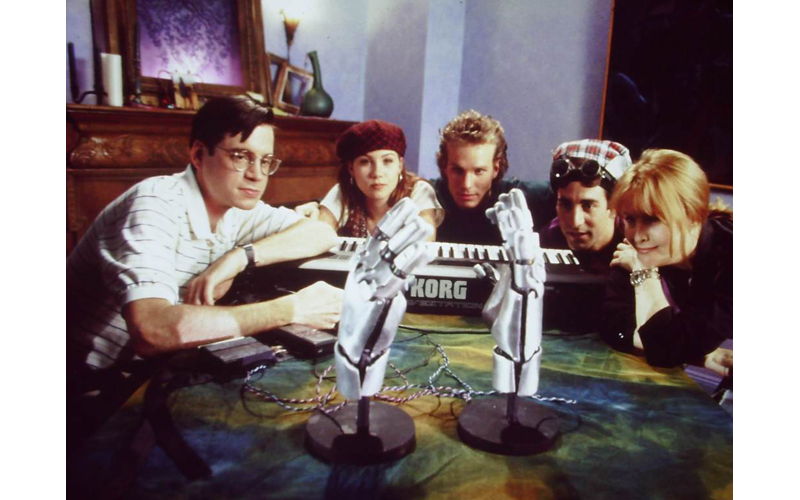 Vibrations attempts to answer the question, “do you need robot hands to play techno music?” | Provided

Power of the Pod

When I’m not working or watching movies, I’m usually listening to some podcasts about movies. One of those podcasts, No Such Thing As a Bad Movie, has become one of my favorites.

Maybe it’s just because it sounds like three good friends chatting about movies they’ve recently watched. Video editor/colorist April Etmanski, visual effects artist Colin Cunningham and filmmaker/author/film programmer Justin Decloux devote a chunk of their focus on some trashy, mediocre films, some unintentionally good ones, bad ones and some charmingly weird ones. Thanks to their show, I’ve been turned on to a few films that I may have not seen otherwise. Here are but a few of ’em.

A Letter from Death Row

The first time I heard the podcast, they focused on this Poison frontman Bret Michaels vanity project that I remembered seeing on video store shelves. My lack of Poison love  kept me from watching it back then. My unwillingness to catch it was furthered after watching Rock of Love, a gross reality show where a group of women vy for Michaels’ attention. If you ever wanted to get an idea of how bloated one man’s sense of self may be but didn’t want to sit through 30 plus hours of it, may I recommend this film. Thrill as characters consistently remind the film’s character, Michael Raine, a man wrongfully convicted of murder, what a good looking, talented awesome guy he is as he tries to prove his innocence. While chatting about the film written, co-directed, produced and starring Michaels and Martin Sheen (who you may also know of as the father of the film’s co-producer, Charlie), Decloux suggests that the bandana-ed star may be trying to ape his idol David Foster Wallace.

After listening to the A Letter from Death Row episode, I backtracked and listened to the podcast’s first episode, which focused in part on Vibrations. Much like Bret Michael’s egofest, I always noticed the video box for this film by the then future president of Lionsgate Films, Michael Paseornek because it had Christina Applegate’s big face and a robot on it. I assumed I’d get around to watching it but that never happened. In this 1996 nugget, kickass musician T.J. Cray (Twin Peaks’ James Marshall) has got it going on. Dude has hella skillz to pay the billz … that is until he pisses off some rednecks that smash up his car. Somehow, this severs his hands clean off? Anyhoo, equipped with plastic hands, T.J. swigs liquor and takes to living in a cardboard box until he discovers rave music pulsating from a warehouse nearby. With a little help from a mid ’90s free spirit Anamika (Applegate) and her pals, TJ drops the bottle, dons a robotic suit equipped with robotic hands and — boo-ya! — he becomes the ever so bangin’ techno artist, Cyberstorm with bomb ass tracks. Vibrations belongs in that painfully ’90s category where films like Hackers and Empire Records reside. It’s a dumb melodramatic nostalgia trip filled with manufactured cool and idiot angst that only the ’90s could create.

During a recent listener request episode, the folks at No Such Thing As a Bad Movie discussed this 2004 Japanese export from Minoru Kawasaki, the director of Executive Koala. The Calamari Wrestler involves a professional wrestler who turns into a giant squid. When he’s not addressing his own inner turmoil or finding  romance, he’s wrestling giant shrimp and octopuses. What makes this bizarre little film fun is that it isn’t winking with its insane premise.

I Am a Knife with Legs

Speaking of insane premises, during one episode, this title was brought up. The enthusiastic mention of such a crazy title had me so intrigued that I wound up renting the film on Amazon soon after. I wasn’t disappointed. The plot of this fun piece of lo-fi absurdity involves an international Europop star named Bené (the film’s writer/director/producer/composer/editor/sound designer Bennett Jones) hiding out in an LA sublet with his manager, Beefy, trying to overcome the grief of a dead girlfriend while dodging a fatwa that has been issued against him. While waiting for the assassins to come after him, he writes songs, wears disguises, eats eclairs and plays with his neighbor’s cat. If you have a soft spot for low-budget action and music reminiscent of Flight of the Conchords, I Am a Knife with Legs won’t disappoint. It’s truly a bonkers film.

Don’t Let the Riverbeast Get You!

Of all the films April, Justin and Colin devoted an episode to, this may be the film I’ve come to love the most. Much like the previously mentioned film, Charles Roxburgh and Matt Farley’s ’50s monster movie throwback is a fun, charming oddball that not enough people know about. And much like The Calamari Wrestler, the cast and crew treat their throwback with love, never acting as if they’re above the material. At the intro a gentleman stops reading to introduce the film. Clearly reading his lines to the audience, he tells us about the flashing red light that will come before each terrifying scene. As our story  begins, a formerly disgraced tutor, Neil Stuart (co-writer Matt Farley), returns to Rivertown after being stood up at the altar and having been given the crazy pariah status after a run-in with the titular monster. Over the course of the film’s runtime, we meet a former jock with dashed dreams, a frustrated housewife, a pop locking vagabond, a decorous deviant, a rebellious college girl and other townsfolk who say such things as “Why I oughta!” and other overly formal lines of dialogue. We even get a musical number, “The River Mud Shuffle” thanks to the reunion of Stuart’s band, The River Mud Warriors. I watched Riverbeast once and enjoyed it but have since rewatched it a few times more. The wholesome vibe meets the stilted John Waters-esque line deliveries only make the film infectious.

No Such Thing as a Bad Movie is available on Soundcloud, Apple Podcasts, and on Twitter at @NoSuchThingPod.