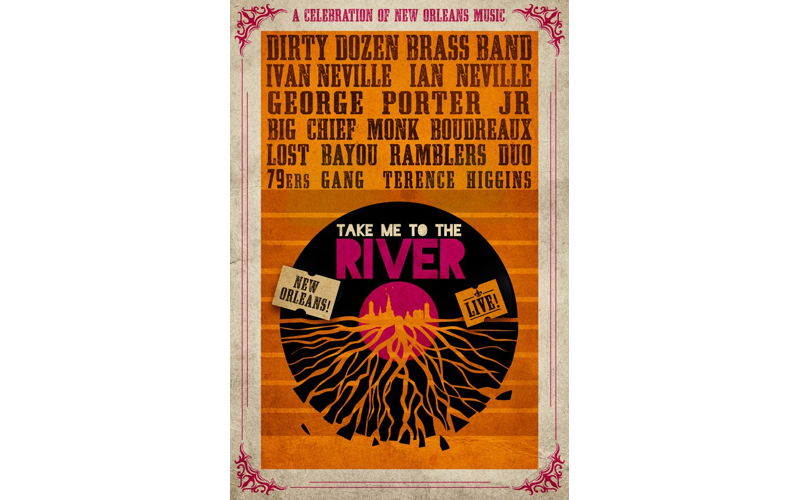 Terence Higgins doesn’t consider himself to be “the New Orleans drummer” anymore. It’s a fair point — he’s the full-time rhythm behind Ani DiFranco and Warren Haynes on their respective tours, and a collaborator with Don Was. “I’m all over the map — I’m kind of the utility guy,” says Higgins. “I shed the whole New Orleans drummer tag. I’m still that, but I think I’ve broadened.

Still, when a band of all-star New Orleans musicians came together for the Take Me to the River tour that visits the Music Hall this Friday, it’s Higgins who got the call. He forms the “house band” with some formidable company — George Porter, Jr. (The Meters) and Ian and Ivan Neville.

They’re also all integral in the greater Take Me to the River project, which began as an album and film directed by Martin Shore about the musical legacy of Memphis, Tenn. That 2014 project grew into a tour, an educational curriculum, and a second album and film based around the music of New Orleans. Although the new album and film won’t be released until 2019, the current tour brings together many of the project’s contributing artists.

Along with the house band, the touring Take Me to the River lineup includes the Dirty Dozen Brass Band, members of the Lost Bayou Ramblers, and Big Chief Monk Boudreaux, a lauded Mardi Gras Indian. “The show is one continuous flow — we don’t really have a break between performances,” says Higgins, explaining that the house band opens, accompanied by “the interns,” a couple of young New Orleans students from the Tipitina’s Foundation’s musical programs selected to join the tour. It segues into the Mardi Gras Indians, including the 79ers Gang (representatives of New Orleans’ 7th and 9th Wards), before transitioning to the creole/zydeco music of the Lost Bayou Ramblers (whose hauntingly beautiful sounds are a highlight of the Beasts of the Southern Wild soundtrack). Dirty Dozen closes, before a finale with all the performers on stage. Setlists vary nightly, from songs by Irma Thomas to Allen Toussaint to Dr. John.

That approach mirrors the album and film projects, which bring together multiple generations to record new versions of classic songs that define the city. Rapper Snoop Dogg’s contributions to the Memphis album helped fuel its international success, and he reprises his role in New Orleans, albeit from his expansive studio in Los Angeles.”He’s got this amazing compound over a couple of city blocks. It’s a Hollywood production facility,” says Higgins, who flew out with a crew of musicians to record at Snoop’s place. Snoop and the New Orleans musicians recorded Allen Toussaint’s “Yes We Can Can,” along with soul singer William Bell.

Higgins also appears in the project with Dirty Dozen and the reunited Neville Brothers (recorded prior to Charles Neville’s death in April) on the forthcoming album, including the Aaron Neville song, “Hercules,” and “a couple of Wild Tchoupitoulas songs.” “That was a moment we captured,” says Higgins of getting the Nevilles together. “It can’t happen again.”

Whereas the Memphis project often turned to the formula of pairing a classic soul singer with a young rapper, Higgins says the New Orleans recordings reflect even more of the diverse musical landscape in the Crescent City, from Cajun to R&B to funk. That wide history is integral to Take Me to the River’s education component. In addition to director Shore emceeing the show and explaining the history behind the music, the project’s “Educational Toolkit” includes a curriculum that pairs with the film to teach cultural history. It’s been widely adopted at New York City-area schools to teach the importance of “intergenerational and cross-cultural collaboration” and the historical context of Memphis’s role in music.

Similar programs are in development about New Orleans — Higgins recently participated in a seminar at New York’s New School’s Mannes School of Music, where DiFranco is an alum. “The program talks about indigenous rhythms and where they come from, including the slave trade,” says Higgins. “We represent our culture around the world when we travel, and we try to be advocates and to pass information along.”

For Higgins, the New Orleans drummer who is also so much more, it’s an ideal role — and one that brings him full circle to the early years of his career. “One of my first gigs was with George Porter, Jr., with (his band) the Runnin’ Pardners,” says Higgins. “The story goes that I played with him for a while, and then he says the Dirty Dozen stole me from him. I played with them for 15 or 16 years, so this tour brings me back with them and with George, and we all get to play together. It’s a homecoming event. For me, it’s pretty spectacular.”