Partying at the Apocalypse 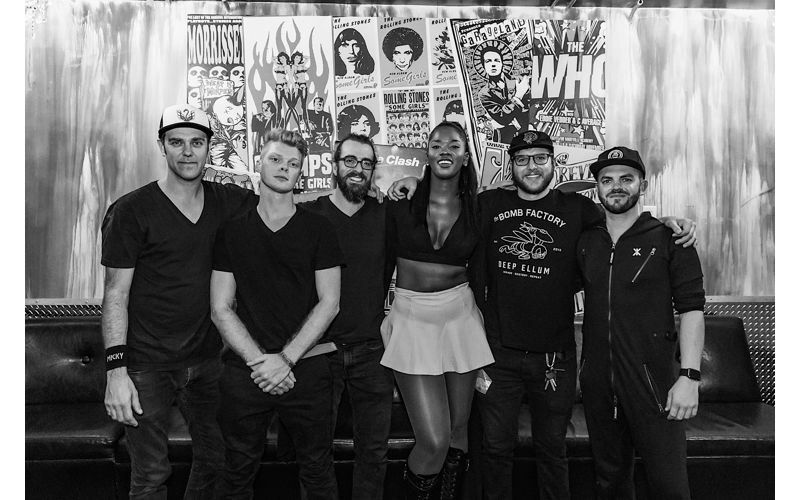 Domingo isn’t technically a member of Doom Flamingo, the sprawling, synth-driven, ’80s and dance-loving rock group originally formed by an ad-hoc troupe of Charleston musicians to play a few after-parties for the jam band Umphrey’s McGee.

Domingo is actually an animated character from a forthcoming comic book that will be released alongside the band’s debut record this fall. A pink anthropomorphic flamingo with a long snout and a grizzled, ’80s Miami detective vibe, replete with a Michael Jackson-esque red leather jacket and brick-sized cell phone. There’s a fascinating duality of bright colors and grim contours, of retro aesthetics and 2010s genre abandonment at the heart of his depiction. Doom Flamingo, the band, can relate.

With its confectionary, live-band spin on synthwave — a typically producer-driven field of electronic music propelled by a zeal for videogame soundtracks, ’80s pop, and dreamy reverb — the band puts an emphasis on the rock, pop, and EDM aspects of those root ideas, giving a freewheeling party aura to a genre often associated with moodier, more nostalgic aims.

Still, with its distinctive aesthetics and visionary sound and style, it’s kind of ironic that the band formed as essentially a one-off project for fun.

“Ryan [Stasik] and Umphrey’s were looking for a band for an after-party,” explains lead singer Kanika Moore. “Ryan was moving this way towards Charleston, so he was looking for a new project and just basically looking for something for a couple of shows.”

It was keyboardist Ross Bogan who originally pitched the idea of a synthwave direction — he and guitarist Thomas Kenney of instrumental group Terraphonics had already been talking about recording some house music. It felt like a natural starting point for a group that, along with Moore and Stasik, included saxophonist Mike Quinn and drummer Stuart White.

The eclectic group of professional musicians quickly found that they were hitting on something special. One of the first songs they wrote and recorded, “F-16,” takes a classic synthwave groove and pulls it toward early M.J. territory, like a Daft Punk tune infused with the futurist Southern R&B swagger of Janelle Monáe. But such bouncy tunes also sit alongside darker, metal-tinged darksynth jams, like the more recent single, “Telepathy.” Even on the latter, Moore’s charismatic presence lightens the edges, creating an indelible synthesis that feels a bit like magic.

“It was intended to be just for a couple of shows, but it just took off immediately,” explains Moore. “We’re all pretty familiar with each other. TK [Kenney], Ross, Mike, Stu and I, we all had worked on music together on other projects. It really was organic.”

As for the songwriting process, every member contributes, and Moore has found the method pretty effortless, despite her lack of familiarity with synthwave and relative inexperience making original music.

“I feel like we have so much experience playing music together, it’s best when we just find some time to sit down together, which is not hard,” she points out, noting they’ve even come up or reinvented tunes during soundchecks or rehearsals and have easily amassed enough material for a full-length.

With the songwriting and performance chemistry firing on all cylinders, the group has continued to play Umphrey’s McGee afterparties and some select festival dates based around Stasik’s touring schedule, but seems poised to make a bigger splash this fall with their debut LP.

“We’re actually planning on thematically separating the A and B side,” explains Kenney, “with one devoted to the lighter, more pop-friendly fare and another to the darker, menacing underbelly of the sound.”

“People are always asking what our sound is, and one of our jokes is, ‘it’s like an underground vampire strip club meets all of your ’80s pop fan needs,’ whatever that means.”

Over the course of a lengthy career, Del McCoury has become widely known for his prowess as a bluegrass bandleader and an unapologetic embrace of the disparate musical forces that lie outside of that world. For these, and other reasons, his family act, the Del McCoury Band, remains a perennial favorite among peers, critics and fans alike.

Charlestonians are fortunate to live in a city filled with celebrated dishes. Fried chicken from Bertha’s, oyster sliders from The Ordinary, whole hog barbecue from Rodney Scott, a lobster roll from 167 Raw — the list goes on. Locals know the city has more to offer than what comes up in a Google search for […]