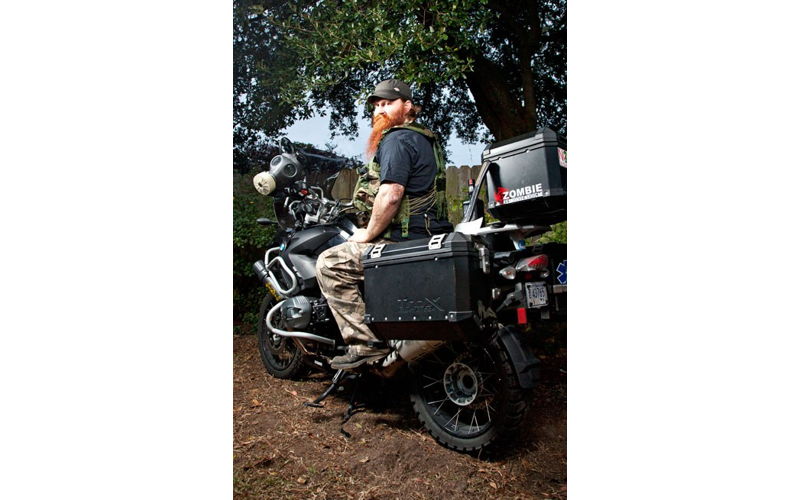 Steve Mosher didn’t just wake up one day with an overwhelming sense of doomsday paranoia. A self-made man with the words “self” and “made” tattooed to his knuckles and a mass of red facial hair worthy of his membership in the Holy City Beard and Moustache Society, he’s not the kind of guy dwelling over Mayan prophesies. “I think I’m the crazy person on the block, like the Y2K person, but I don’t believe in bunkers and I don’t believe in going underground,” he says.

Instead, he’s a survivalist because, time after time, he’s had to survive, whether it was the Midwestern tornadoes of his childhood or something far more catastrophic. And being a survivalist, Mosher always has a plan B ready. “Survivalism is being a responsible adult in a current age,” Mosher explains. “You have to have survivalism, because if you don’t, you won’t last very long.”

As an aircraft mechanic, Mosher has worked in an industry that saw its own economic collapse come years before the rest of the country’s, but he’s still pulling in a paycheck. And two weeks after he eloped with his wife, Mosher moved to Baton Rouge by himself for work — just in time for Hurricane Katrina to hit.

“If you’re going to evacuate, two wheels are the way to go,” Mosher says. Apparently, traffic jams don’t apply to motorcycles. “If I was in anything but a two-wheeled motorcycle, I wouldn’t have made it out. From Baton Rouge to Lafayette, I think I made it in 12 hours, and it’s normally about a four-hour trip in a car.” The other good thing about motorcycles: They only have three- to four-gallon tanks. And if the gas stations are tapped and the fuel trucks aren’t coming in, no one may notice if you siphon a couple of gallons from a tank on a used car lot. That’s another one of the little fundamentals Mosher plans to put into use should the worst happen.

When Mosher and his wife were living in the much colder Midwest, a big ice storm hit and they went without power for 11 days, seven of which saw freezing temperatures. The couple had to take refuge in his in-law’s house, because she had a fireplace, and they stapled sheets to the doorways to keep the warm air in one room. Another time, when they were staying on the ground floor of a Nashville hotel, Mosher witnessed a shooting through his peephole. “That was another episode where my wife and I had to have a plan B, where if we heard a shot in the middle of the night, I was going to push her off the bed and that’s where she was going to stay,” he says.

Tricks like that might not be as critical as hunting and gathering or first aid, but they’re still survival nonetheless.

“I think as a responsible adult, you have to think about plan Bs at least once a day, if not twice a day,” Mosher says. “Everybody needs a plan B in any kind of scenario. All you’ve got to do is watch the news. What do you want to plan for?”

Evidently, Mosher and his wife plan for a lot. There’s one for an earthquake, another for a hurricane, and another for a complete economic collapse. Mosher’s goal isn’t to be the last one standing. He just wants to end up standing longer than most.

And at the end of the day, Mosher understands that he’ll need to know when to throw in the towel and get out of Dodge. Mosher’s ultimate plan B? Leaving the country. Unfortunately, not everyone can fit into that equation. “That was something my wife and I had to talk about with our plan B,” he says. “If we do have to retreat outside of the U.S., who could we bring along with us, and who can we and who can’t we? And the big thing is who is ultimately responsible for your well being. I’m more than happy to invite people along, but I can’t afford to save the whole family.”

However, Mosher’s staying put for now in the home the couple owns in Park Circle. “I’m happy to be in this community. I’m not going anywhere,” he says. “There are a few people like myself I would think in the Park Circle area, and there’s a lot of people that are diverse, but we all get along really great, so I think that when push comes to shove, Park Circle is going to be a good place to try to re-establish, because everybody has certain skills.”

But he advises his neighbors to figure out what those skills are — and what they can barter. “I think bartering is probably your No. 1 ally,” he says. “Just know what your strengths are and be willing to compromise, be flexible, and willing to barter.” A person could trade a practical form of labor, like Mosher’s own knowledge of mechanics, but they may need to get a bit more creative if they’re, let’s say, an insurance salesman.

Oddly enough, Mosher doesn’t have a specific Dec. 21 plan B, though he’s confident he’d make it through if something bad were to happen. Ultimately, he’s not too worried about the date, but he doesn’t think it would be so bad if he got to see all his hard work pay off.

“It’s like going on a camping trip,” he says. “You’ve spent so much time and resources planning this out to where when it does happen, it’s going to be like ‘Ah ha. I told you all. I told you this was going to happen. Now I’m going to go home and watch movies. Good luck.’  ”

College of Charleston professor Scott Poole is the City Paper‘s go-to guy for weird shit. Christian haunted houses? He knows all about them. Bigfoot? He’s got the answers. Unicorns? Well, he’s not an expert on them, but he easily pointed us in the direction of someone who was.