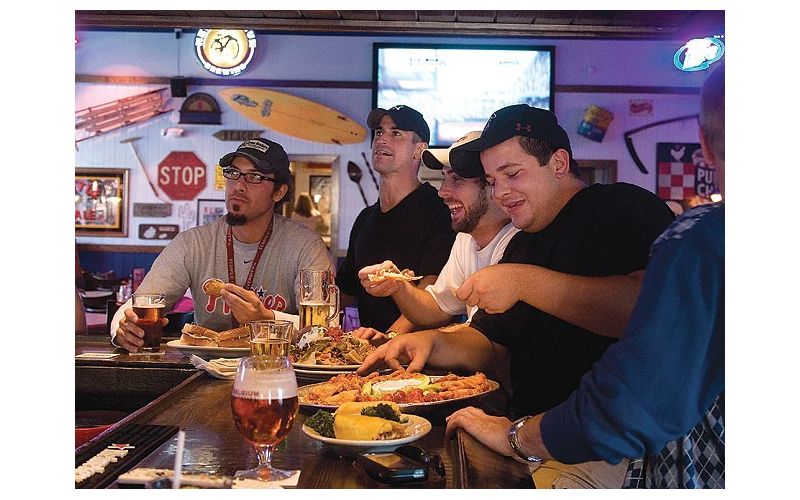 Back at the beginning of the year, I made a passing comment in a restaurant review that the British “bistropub” model — a restaurant with the atmosphere and layout of a neighborhood pub but with high-quality, reasonably priced food — really doesn’t work outside of England, since we don’t have the tradition of the local public house to build on. Instead, I speculated, “to translate that to the suburban U.S. would be to have a strip mall sports bar with plasma TVs that also cranks out some fantastic meals.”

Be careful what you wish for.

In recent months, a whole crop of bars have popped up that seem to be taking me up on that challenge, starting with an ordinary bar setting and adding menus that show a healthy dose of culinary ambition.

Just the other day, I was having dinner at the Twisted Fish (2700 N. Hwy. 17 843-388-2601), which replaced the old Break Room in the Shoppes at Brickyard in Mt. P and brought in Brannon Florie from the Boathouse as executive chef. Inside, it’s definitely all bar — dimly lit, high tables with stools, signs announcing Team Trivia on Sunday nights, and 13 flat-screen TVs providing every seat in the house with something to watch. Business was fairly light, and the crowd seemed a mix of happy hour stragglers along with a couple of larger, rowdier parties there to watch the game. Two of the big flat-screens over the bar were tuned to the Dolphins and the Jets on Monday Night Football, while two others showed the Phillies and the Rockies slugging it out for the National League Championship. Between them, with closed caption on, Charlie Rose was interviewing Michael Moore on Bloomberg. No one was watching Michael Moore.

The entrée I was trying to enjoy fit in about as well as Rose and Moore: a pan-seared chicken cutlet studded with tomatoes, spinach, and goat cheese and served over garlic mashed potatoes with a lemon butter sauce. I took a bite and reflected that one really wouldn’t expect to find such a dish in a neighborhood bar. I took another bite and decided I should have ordered some chicken wings.

And that’s when I knew that my enthusiasm for the “American bistropub” was finished. Each time I had eaten at one of these ambitious new spots, my brain would tell me, “This is encouraging. A bar that’s trying to have good food. I should come back the next time I do happy hour or with the family on the weekend so we can have something a little classier than fried cheese and sliders.” But, for some reason, when Sunday afternoon rolls around and we head out for a casual late lunch, the car always steers itself toward Wild Wing Café, much to my eight-year old’s delight.

At the risk of losing whatever gourmet credentials I might have left, I will declare an ongoing affection for places like Wild Wing, which does what it does very well. They’ve just opened a new location in Mt. Pleasant way up north in the Oakland Shopping Center (1181 Oakland Market Road 843-849-8646). I dropped by on a recent Sunday afternoon, and, though it had opened a week or two before, it was already packed to the gills with a mix of families dining out after church and couples in matching NFL jerseys out for a few afternoon beers while watching their favorite teams.

Wild Wing has their formula down, and it doesn’t involve seared tuna or housemade mayonnaise or putting smoked duck in quesadillas.

I think, ultimately, the problem with trying to bring fine dining dishes into a sports bar is that the context is all wrong for that kind of food. When you go out to a sports bar, your attention is only partially focused on the food. There’s the game on TV (or, more accurately, several games on dozens of TVs), and the play-by-play on one of them is usually blasted at top volume so it can be followed over the general noise of the room. There’s the time-honored tradition of trash-talking the strangers at the table next to you, who asked for it by wearing a rival team jersey or ball cap, which doesn’t seems to happen a lot at McCrady’s or the Charleston Grill. If, like me, you’re an old married grump trying to enjoy a family afternoon, your attention may be further occupied by a three-year-old throwing crayons and an eight-year-old trying to score a fifth cup of Coke from a friendly waitress. This isn’t the right time to be using a knife and fork, much less trying to savor delicate, nuanced flavors.

Whether it’s the neighborhood watering hole for happy hour or the family-friendly sports bar on a weekend afternoon, bring on the Buffalo wings and a lot of fried stuff: french fries, cheese sticks, onion rings, chips, chicken fingers, jalapeño poppers. And anything loaded up with cheese, like potato skins, cheese fries, and big plates of nachos. Burgers are good, and sliders are even better because you can eat them with one hand without oozing ketchup and grease all over your shirt.

This isn’t to say that sports bars can’t get a little ambitious with their food. They should. They just need to do it in the right way, and not confuse high-falutin’ ingredients and preparations with good eats.

Manny’s Neighborhood Grille in West Ashley (1680 Old Towne Road 843-763-3908) has the right idea. They’ve got all the wings, nachos, and chicken fingers your heart could desire, and they throw in a lot of Greek favorites, too, including gyros and pitas served in plastic baskets with waxed paper. Even the knife-and-fork stuff — pastitsio and spanakopita — is hearty and basic and fitting with the atmosphere.

Both of the Moe’s Tavern locations — Crosstown at 714 Rutledge Ave. and Downtown at 5 Cumberland St. — take a similar approach, bringing the food up a few levels without pretending they aren’t, ultimately, a bar. Their half-pound burgers are pattied by hand and served with hand-cut fries, too. Moe’s BLT with fried green tomatoes, fresh mozzarella, bacon, and pesto mayo is simply out of this world. But, you don’t feel out of place munching one down elbow-to-elbow with your neighbor at a crowded bar.

Another ideal place for bars to get ambitious is with their drink selection. What surprised me about many of the would-be gastropubs is how weak their beer menus are. One actually has Rolling Rock, Sam Adams, and Yuengling under their imports category. You might expect that at your local watering hole where they’re really just using the “import” label to mean “it costs more than Bud,” but at a place where the menu includes beef tenderloin and beurre blanc sauce you get the sense that the guy running the front of the house and the guys in the kitchen aren’t really talking.

So, I hereby retract my call for an “American bistropub.” Let’s leave the roasted fish and pork shanks and tournedos of beef for when we’re sitting down in an elegant room with a tablecloth and an attentive but discreet waiter and no flat screen TVs blaring at you. That’s a setting where one can focus on the food and enjoy the subtlety along with good, calm conversation. Until that quiet moment comes along, I’ll be the guy knocking back sliders with a big frosty mug of draft beer.