Gin in the Afternoon 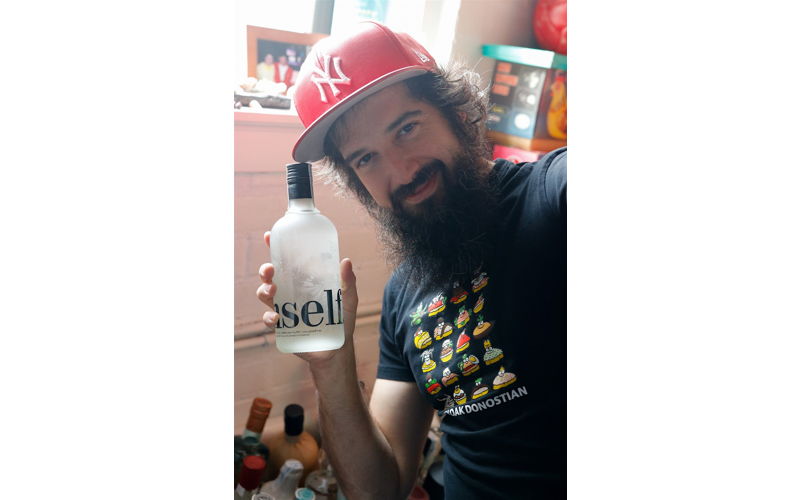 “Would you say it’s an addiction? A fascination?”

Estadio D.C. bar director Adam Bernbach laughs, looking to Estadio owner Max Kuller. We’re at the Living Room bar on the ground floor of the Dewberry, sipping gin and tonics — to be referred to sans ampersand in true Spanish fashion from here on out. The mod feel of the leather armchairs and gold embossed tables belie the feeling brought on by the festive, over-the-top goblets, brimming with ice and bubbles. To the layman, the gin tonic is a refreshing cocktail, effervescent, bright and botanical. To Bernbach and Kuller, GTs are a passion project, a “vessel for traveling,” a “multidimensional package.” And soon, Charleston will have access to the rare suitcase gins these guys have collected from all over Spain, and beyond.

Unlike many of our old world fascinations, gin tonics are not a centuries-old phenomenon in Spain. In fact, most people associate the drink with England (hello, Beefeater). “I think really quickly a gastronomic impulse entered the gin tonic very early as it became a trend,” says Kuller.

According to a 2016 Forbes report, the Spanish gin tonic revolution took place between 1999-2009 when journalist Rafael Garcia Santos held The Best of Gastronomy summits in San Sebastian. In the article bar consultant and “cocktail innovator” Miguel Lancha says, “Every night, Santos and the chefs went to a favorite watering hole where the gin and tonics were sensational … word got out that the gin and tonic was top chefs’ off-duty beverage of choice, and the Basque Country was making them an art form.”

Bernbach and Kuller say they got the gin tonic bug about a decade ago, and started their journey with an extensive in-house tonic program. “It’s certainly ramped up over time,” says Kuller. “Adam knew there was this amazing thing going on there but we didn’t have that firsthand knowledge of it or access to it and there wasn’t a ton out there about it so Adam created these amazing house tonics, there were a couple to start then more. I think our first five years was really based around these house tonics and pairing them with these gins in a really nice way.”

Bernbach remembers the Estadio GT genesis as more of “kind of like … O Brother, Where Art Thou? recreating The Odyssey.” As the two, eyes open for GT, started to travel more frequently to Spain and other countries, they realized they had just scratched the surface of what they could be doing in their D.C. spot.

“The way it has evolved, when we started bringing in more exotic gins and suitcasing some gins then it became,” Kuller shakes his head, seemingly overcome with trying to explain the complexity of this distillate. “Some of these gins — they have so much nuance and botanical flavors of their own.”

There’s the Mahon — made on the tiny island of Menorca with a “very specific maritime saline dried herb” and notes of “light lemon citrus, white yellow flowers” all of which are unique to this one speck in the Mediterranean.

“They also happen to dry juniper berries right next to the sea in an open warehouse,” says Kuller. “There are older styles that developed 100-200 years ago and then there are styles that are developing now.”

With a somm background, Kuller can’t help but reference the importance of terroir. Like in Australia, where they’re embracing the local produce they have: “bush tomato and different lemon myrtle and green ants and all these things that are eye opening,” says Kuller. Or the Nordis, one of their favorite gins, a Spanish style distilled from Albarino grapes. And in the states, the Wisconsin gin, Driftless Glen’s WisconGin, bravely forgoeing the addition of citrus for their version. There are distilleries taking place very literally — magnolia flowers in a Mississippi gin — and iterations, Kuller says, that don’t “necessarily speak to place,” they’re just sourcing the best possible ingredients for their product.

“For us that became another huge layer of interest, the different base distillates that give all this texture and dimensions and speak to that sense of place, it was multifaceted, this idea,” says Kuller.

If you still cannot conjure up the mouth feel of a Spanish gin tonic, Bulldog Gin trade advocacy manager Anthony Pullen defines this style for us in Forbes. “But the Spanish gin-tonic … is stylistically a very different drink than the traditional English version. First, it’s not uncommon for a regular bar in Barcelona to stock as many as 50 different gins behind the bar. And the tonic is hardly the afterthought it is in other parts of the world. In the Spanish gin tonic, the drink is elaborately garnished with many different herbs, spices and flowers to amplify the botanicals in the gin — a long way from the simple squeeze of lime.”

Kuller and Bernbach espouse the virtues of the relatively low ABV cocktail, of the way it is consumed in Spain — late at night, after dinner, sipped over a period of hours out of those large, seemingly bottomless goblets. “You have this big volume liquid but it’s also relatively light in alcohol,” says Bernbach. “If it’s 2, 3 in the morning you’ll be out til 5 or 6 … it’s a very thoughtful form of drinking.”

Follow Estadio Charleston on Instagram (@estadiochs) for updates about their opening date and their next pop-up this August at an upcoming Charleston RiverDogs game.