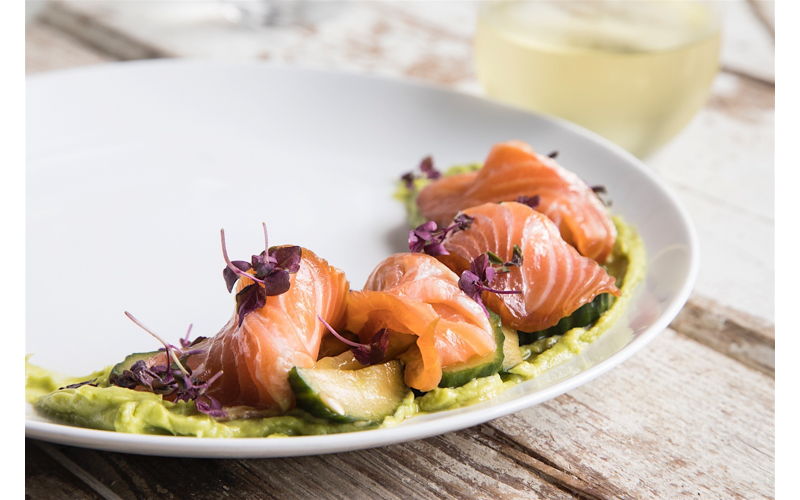 During the first quarter of this year, while most of us were busy failing at our New Year’s resolutions, Chef Tres Jackson moved up from Alabama and opened his new restaurant Sorghum & Salt. Situated in the space that once held the beloved Two Boroughs Larder, Jackson inadvertently stepped into some large, empty shoes, yet it’s safe to say there are some new size 15 feet in town.

For starters, who are these cyborg/superhuman (hopefully clone-able) servers, and do they have to be so flagrantly perfect? Along with knowing every little thing about everything on the menu, they’re relentlessly enthusiastic and genuinely glad to be there. They casually mention that they show up early to make pasta and then wait tables, because that’s totally normal. Engaging and charming, it starts to feel less like a dining experience and more like a burgeoning friendship.

I smell a cult.

Need further proof? While endorsing the root vegetable Bolognese ($15), my delightful waitress revealed that her coworker comes in without fail on her only day off to eat this dish. Although it looks like a traditional Bolognese, the flavor profile is unexpected. The doughy, dumpling-like ricotta gnocchi pair with the delicately roasted beets and carrots, albeit in a manner that’s more evocative of Russia than Italy. Add in the crème fraiche, horseradish, and fennel and the Eastern European flair is even more pronounced. Would I come in on my only day off for it? Unlikely, but that doesn’t mean I wouldn’t be willing to reconsider the significance of the Hale Bop comet in exchange for some of the salt roasted beets ($13).

Lawd have mercy, those beets. The dish starts out subtle, the first impression being one of a crumble dessert. Then the crunchy “olive dirt” topping asserts itself and the salinity of the dehydrated kalamata olives hits. It’s at once one of the most unusual and special concoctions I’ve had the good fortune to chew: a total knockout of a dish.

Equally refined, but less experimental, the scallops and bacon ($16) find an inch-wide slab of braised belly topped with delicate slices of seared scallop and a soy caramel sauce — everything you hope for in a bacon-wrapped scallop, yet without the usual undercooked meat/overcooked seafood sad trombone results.

The menu seems to be in continual flux — about half the items changed within five days of my initial visit ­— so it maybe isn’t worth it to go into all kinds of detail about the food, except to say if you see the Ambrose Farms radishes ($11) paired with pears, matcha, and black olive caramel, you need to get all up in that like a hobo on a ham sandwich. The melt-in-your-mouth pears are apple pie-esque, but the savory cubed turnips keep it real. Black olive caramel proves, once again, I have been underestimating the grandeur of kalamata olives. I ordered this dish because of the matcha, which I honestly couldn’t taste, but that’s ok. It made me a believer all the same.

My waitress claimed the roasted cabbage and short rib salad ($14) was ‘the best thing she’s ever eaten,’ which I propose is a bit of an upsell. Everything is quite charred, and it’s reminiscent of the scrapings from a pan … but in a good way. Moreover, I’m a big fan of mint in unexpected places, and every encounter — albeit, too few — elevates the other flavors in this salad.

Still, the server mentioned that one of her favorite things is when a large table of guests disagree as to what is the best dish. One man’s roasted cabbage and short rib salad is another’s salt-roasted beets, but the thoughtful creativity that goes into all of it is undeniable.

Case in point, the seared grouper cheeks ($25). Despite the ethereal scattering of dainty flowers, this was by far the most indelicate dish I tried. Although the flavor of the charred green onions help to balance the fishiness of the cheeks, the super smoky mushrooms tip the umami scale into no man’s land. With a persistent savoriness from which there is no relief, the airy sunchoke puree is beautiful, but damn I could’ve used some lemon juice or other brightening element.

The final dish, of which I would not change a molecule, was the beet cremeux ($10). This is, perhaps surprisingly, a dessert. To be truthful, I ordered it precisely because it sounded so damn weird, but it turns out espresso, beets, and pistachios are a life-altering trifecta, at least in the hands of Chef Jackson. Light, airy, and jaw-droppingly good, this has occupied more of my thoughts than I care to admit.

Regardless of your preferences, adventure level, or susceptibility to brain washing, it’s clear that whatever comes out of the doggedly creative S&S kitchen will be worth trying. A group effort and an obvious labor of love, this is thoughtful, provocative food prepared and served by people who are clearly proud to be a part of it. Whether an actual cult or simply on its way to cult status, I’d be willing to sell flowers at the airport in exchange for pretty much anything Sorghum & Salt is dishing up.