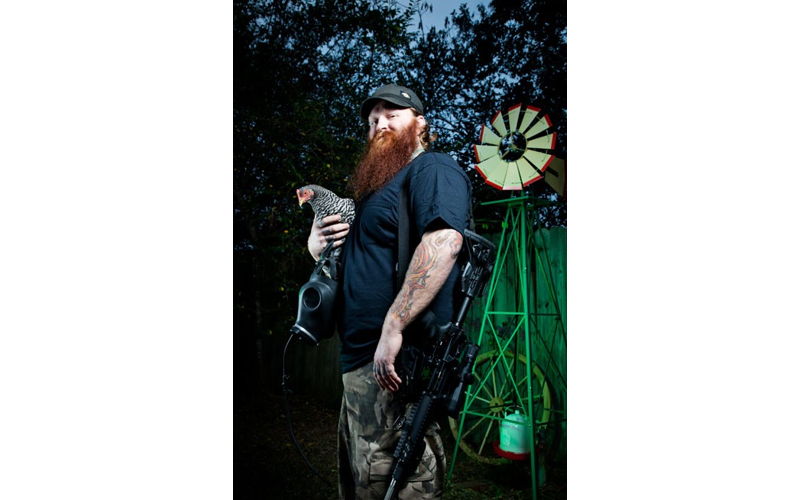 When push comes to shove...

Have a hurricane kit. Steve Mosher learned that even before he moved to Charleston. Make sure there’s a gallon of water for every person in the house. Don’t forget the non-perishables either. “It’s not about how much money you have in a crisis situation,” he says, “because when Katrina hit Baton Rouge, it didn’t matter how much money you had. There’s just no food.” His own is centrally located in his house, with 14 cans of non-perishables, three gallons of kerosene for a lamp (with extra wicks), six gallons of drinking water, diethylene glycol (a flammable gel the military uses to heat MREs), batteries, a flashlight, a radio, a solar blanket, and a burner that will run on anything flammable. Basically, it’s anything you’d want to have on a camping trip.

Chickens make useful pets. They’re cheap to buy (maybe $10 a pop), they eat anything, and they can be eaten in return. A coop will cost extra, especially if, like Mosher, you’re handy and want to make yours indestructible.

A generator is key. Everyone needs power these days, and who knows how long it’ll be before it comes back. Most generators operate off of gasoline, but it degrades during storage, so Mosher bought an added kit to make his run off of natural gas too. His last resort is propane, which doesn’t have a shelf-life. Mosher also has hundred-pound propane tanks full and sitting in storage. His generator is wired into the house and stored on the back of the building, ready to use. It’s also portable, just in case Mosher can’t set up at his own homestead.

Keep in mind the precious metals. That’s gold, silver, and firearms. That last one may be the most important, because a gun can help you sleep at night. Mosher has what he calls “personal protection” in every room of the house. “Because you don’t know,” he says. The looters and mobs in Louisiana didn’t wait for the sun to go down. “People are hungry, desperate, they were going to kick your door in whether you were on the other side or not. As scary as it is, it happened [after Katrina], and it could happen again.”

Stock up on heirloom seeds. Especially for crops that can grow in most soils and conditions, like lettuce and green beans. Corn, for example, can grow practically anywhere, and quickly. And not only can you eat it, but you can make liquor out of it too. That might be something good to barter later on.

Manage your medical supplies. Mosher has all of the basics you’d find in a bathroom cabinet, like rubbing alcohol and Q-tips. His stock is filled with gauze, syringes, super glue, and suture kits. And as silly as it may seem, maxipads can have many uses in an emergency. As some friends in the special forces told Mosher, they can absorb anything.

Self-medication is a last resort. The most radical of Mosher’s medical tips? Getting antibiotics at tractor supply stores. (He says even his wife thinks this one’s silly.) Though these drugs are meant for other mammals like horses and cows, they work on humans too. But dosing can be tricky.

Consider purchasing a Geiger counter. After Japan’s tsunami and Fukishima nuclear reactor meltdown in 2011, the price for a Geiger counter, which measures radiation, quadrupled, according to Bloomberg News. Better get one now while they’re still semi-affordable.