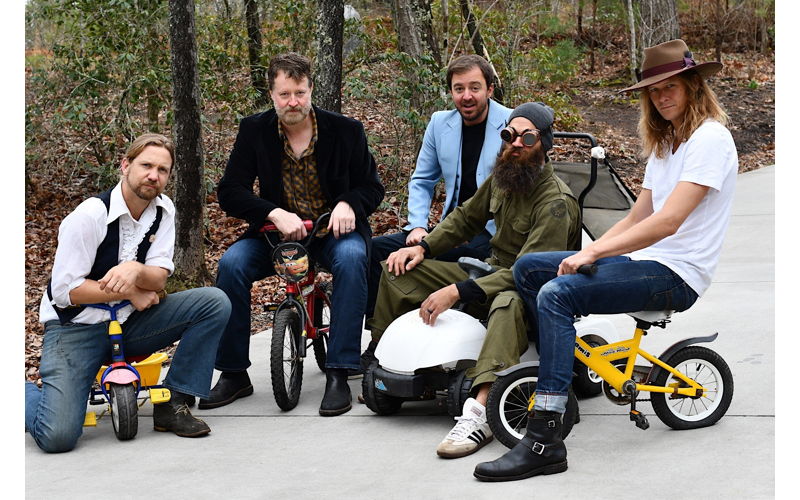 For about 15 of the 19 years since their first gig, Charleston’s Sol Driven Train were pretty damn driven. They played over 150 shows a year at a minimum, recording six studio albums, an EP, and a live record along the way. And they got pretty good at a wide-ranging mix of country-tinged roots-rock, folk, and New Orleans-style soul (thanks to their two-piece horn section). To an extent, that hard work paid off; the band built up a loyal following around the Southeast, and the gigs kept coming.

But after more than a decade spent on the road, things got a little too close for comfort. By the time 2015 rolled around, the band knew something had to change.

“The last four years have been a very interesting chapter,” says Sol Driven Train singer/guitarist Joel Timmons. “If I’d talked to you four years ago, I would’ve told you that the future of the band was uncertain, just because of the various projects we had going on and life in general. The lifestyle of the road wore on us as individuals and stressed us out [to] the point that the music was suffering. It looked like everything was going to unravel, so we took a step back.”

The band cut down its schedule considerably, playing about a third of the shows they normally would each year, not recording new material, and more or less trying to stay out of each other’s way.

“We decided to take some time away from it and come back together and see if the common thread was still there,” Timmons says. “We still loved each other, and we loved the music, but it was just too much. We’d been playing 150 shows a year for 10 years, and our career felt like it was plateauing, so we’d started wondering what we were doing with our time. So we said, ‘Alright, let’s let it coast, and figure out what shows we still love playing, or is it recording or writing we want to do? What is it that everyone in the band is still 100 percent passionate about, unanimously?'”

Timmons says that he probably took that decision harder than the rest of the band (singer/guitarist/trombonist Ward Buckheister, saxophonist Russell Clarke, bassist Matty Thompson, and drummer Wes Powers), because it meant a conscious step back from exposing Sol Driven Train to a wider national audience. A full-time career in music had long been Timmons’ goal, and it initially felt like he was giving that up.

“There definitely was an adjustment of my expectations,” he says, “and for me, that was a very hard process. I was thinking, ‘We’ve worked so hard on this brand. Do I hire a new band in Nashville and call it Sol Driven Train?’ I was weighing all those different scenarios. Eventually, I had to separate those ambitions from that particular group of people and realize that they have different priorities in life.”

Timmons was able to stay in music full-time, moving out to Nashville and starting his next project, the bluegrass/alt-country duo Sally & George with singer/bassist Shelby Means. Meanwhile, Powers and Buckheister became fathers, and Sol Driven Train was put, not on the back-burner, per se; more the middle burner.

And it turns out that a limited schedule completely rejuvenated the band.

“It’s been amazing,” Timmons says. “Amazing to play less, and amazing for everybody to have the personal sovereignty to say no to a gig without any guilt trip. When we get together, it’s joyous like it used to be when we first started the band, when we were getting together just to have fun. Maybe the precision has suffered a little bit because we’re not out there shooting free throws every day, but the joy for the game is back, and that’s more important for live shows: That we’re enjoying it and having fun, and the audience can feel that.”

In fact, the slower pace has even kick-started the band’s long-dormant recording schedule.

“We’ve got some new recordings coming soon,” Timmons says, “and it just feels like things are coming along at just as good a pace as they ever have.”

Timmons says he and the band aren’t falling into that trap again.

“When the offers start coming in, you want to go, go, go,” he says. “But that’s when your diet or your exercise routine or your relationships back home are going to suffer. It’s a constant balancing act between wanting to be out there working and staying sane.”

For now, at least, the band has firmly chosen the “staying sane” option.

“Our friendship is the most important thing beyond quote-unquote ‘making it,'” Timmons says. “We had to set that aside, that feeling of, ‘We’re about to break,’ and be content that there are people out there who love what we do, and we love what we do. Let’s just keep trying to deliver shows and recordings we believe in for those people. Maybe that crowd will get bigger, maybe it will get smaller, but it’s still there.”