Sin Nombre is a chase story with heart 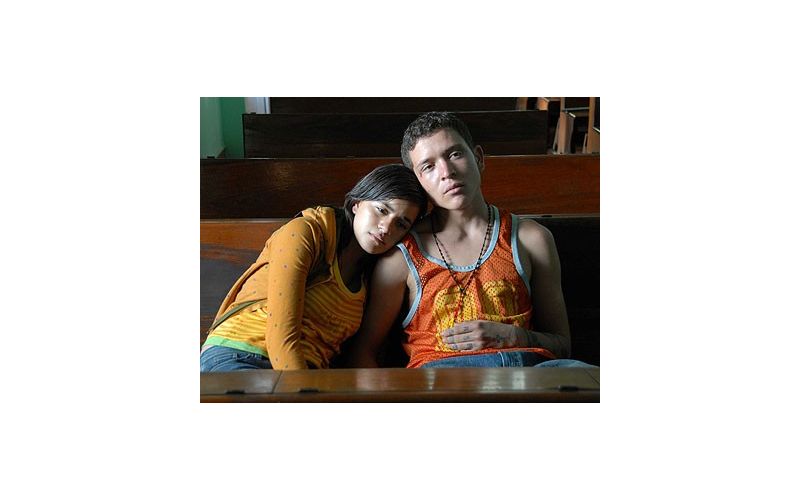 That poverty breeds fatalism is rarely experienced as powerfully and brutally as it is in one of the most startling features of Sin Nombre: the full-face tattoos worn by the Mexican Mara Salvatrucha gang members that advertise their defiant allegiance to a life outside the mainstream.

The leader of the gang, Lil’ Mago (Tenoch Huerta Mejia), has almost every portion of his face obliterated with ink, wearing a perpetual tattoo mask reminiscent of the tribal tattoos of New Zealand’s Maori Indians. What those tattoos symbolize is hard to miss: lives entirely outside the mainstream of society defined by an unbreakable code.

Though the extent of gang member El Casper’s (Edgar Flores) facial tattoos are a small teardrop on his face and an inscription on his neck, the Mara gang has marked him as their property nevertheless. Where he goes, whom he associates with, are all ruled by Mara custom, and when Casper’s illicit visits to his girlfriend become known, his allegiance to the gang is questioned.

Casper is on a treacherous path that we sense will end disastrously, as surely as Sayra (Paulina Gaitan) is on hers. Reunited with the father she never really knew, Sayra undertakes the dangerous passage from Honduras to America, where family members wait in New Jersey.

For a time their stories run on parallel courses, until their paths finally intersect when Casper turns against Lil’ Mago for brutalizing Sayra. With that, he’s made himself into a target for the Mara.

An arduous journey to America becomes more perilous when Mara gangs join forces to hunt Casper down. Sin Nombre is in essence a chase film, whose excitement derives from Casper’s efforts to both protect and help Sayra, while avoiding the long-tentacled arms of the Mara. With his weary expression and hopeless eyes, Casper is girl-bait on a stick. He not only saves Sayra from a monster, he gallantly escorts her across a landscape littered with predators. Sayra responds like a young girl having her first taste of masculine kindness in a brutal world: She clings to him like ivy.

A Romeo and Juliet tale set against the myriad horrors of life in the contemporary Third World, Sin Nombre is a more veracity-infused portrait of a passage sensationalized most recently in the 2007 sexual slavery drama Trade (also starring Paulina Gaitan, who does wide-eyed innocence exceedingly well), which also dramatized the nightmarish passage of Latin American immigrants to America.

In some towns, villagers throw gifts of fruit to the immigrants riding atop the trains. But as they move closer to the Mexican border, other residents greet them with stones and taunts. In many ways, the travelers begin to resemble pioneers in American Westerns beset by Indians and foul weather, bandits, and endless hardships on a journey to a new world.

But this is a revisionist pioneer tale, shot in Spanish (the title translates to “nameless”) with English subtitles by first-time feature director (and writer) Cary Joji Fukunaga. Fukunaga admirably captures the squalor of the immigrant and gang worlds: the people littering the train yard like refuse, waiting for a passing locomotive or the warren-like Mara hideout decorated with homemade guns and pornography and a cage in the back to hold prisoners from rival gangs.

Despite the novelty of the setting, Fukunaga is not immune from the occasional gangster stereotypes, like the homicidal sociopath Lil’ Mago, gingerly cradling his infant child as he instructs Casper and Smiley on how to execute a rival gang member. The exotic setting and strong performances go a long way toward distinguishing Sin Nombre, even if the story itself can feel anemic, in need of some substance and heft beyond the impressionistic treatment Fukunaga offers of these castaway souls. The bare bones are there, but even with two Sundance directing and cinematography awards, Sin Nombre feels less than fully realized.