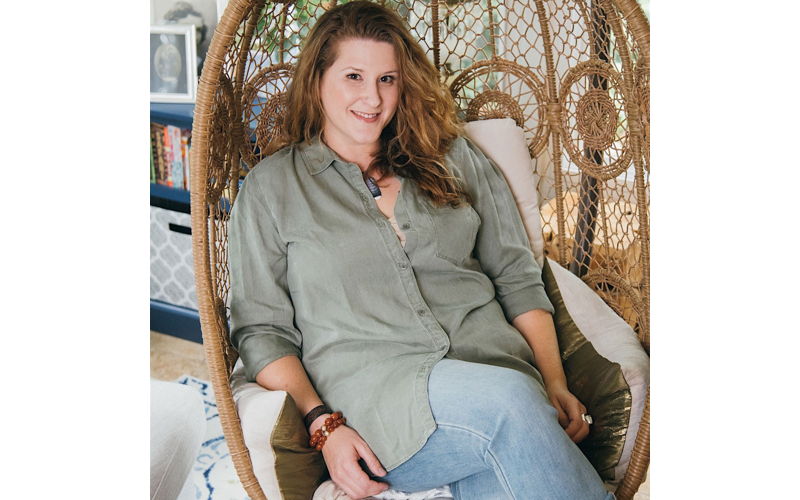 The first line in local author Signe Pike’s first work of fiction, The Lost Queen, launches readers into a world they didn’t know existed and one, most likely, they didn’t know they needed. By the pool, in my bed, and most often, crunched in the front seat of my car, I consumed Pike’s novel over a week this summer. It transported me to Scotland, AD 550. To be specific, to the Cadzow Fortress, home of Languoreth and Lailoken.

“I was in England to promote Faery Tale [Pike’s 2010 memoir] when I came across a book,” says Pike, explaining the origins of The Lost Queen. “I’d never heard of this theory that the character of Merlin could be based on a real story. I was looking for the real roots of the beliefs behind faeries, and what’s remembered through English and Irish folkore; I was drawn to that book on Merlin.”

Pike and I are sitting in the sunroom of her Mt. Pleasant home. A verdant backyard and a rainy day throw the kind of natural light on Pike’s face that photographers dream of; I wonder, as I ask Pike questions, why she looks so familiar. Of course, I think, she reminds me of Languoreth. Interviewing Pike after reading her gripping novel is like watching the behind-the-scenes takes from your favorite movie. It doesn’t take away from the story — it enhances it.

The protagonist and titular character of Pike’s novel, Languoreth, is a fierce red-headed woman who we follow from age 10 to 33 in The Lost Queen. While Languoreth, a real historical figure, may not ring any bells for you, her brother should — Lailoken, a title given to a real man who was, for the rest of time, remembered as Merlin the wizard.

“The more I found out about her life, and how she’d lived through one of the bloodiest civil wars in Scottish history — that no one remembers — I thought, what a travesty that this woman is fictionalized because she’s related to someone who inspired a legend,” says Pike. “My mission became to ressurect her memory.” And Pike is well aware of the irony — she had to write a fictious novel based on historical figures to introduce Languoreth’s story to the world. “Fictionalizing it, in storytelling, is how we preserve truth and pass it down to other generations.”

The Lost Queen is a novel of historical fiction, which on the surface appeals to the audience those kinds of books draw, namely middle aged women. Not middle aged, and pretty lukewarm towards historical fiction, I suggested to Pike that my adoration of the novel comes from a deep love of young adult books. The Lost Queen checks off all of my YA requirements: badass female protagonist, love story (crucial), and page-turning story filled with real life love and loss. Pike nails it.

Earlier this month The Lost Queen was one of Barnes & Noble’s Fall 2018 Discovery Picks, joining just 11 others. The book, which isn’t on sale to the public until Sept. 4, currently has 4.5 stars on Goodreads based on 57 reviews. “The president of Simon and Schuster told me she loved the book,” says Pike. “So when I think, ‘I really have to do laundry,’ I’m like, ‘No! Carolyn Reidy is waiting for this book!'”

Based on the early praise, Pike’s intention to deliver two more books in the trilogy in the next two years, and my amateur opinion that The Lost Queen rocks — you’d think Pike had been writing historical fiction for ages. Not so.

“I was taken with this idea [of writing about Languoreth], but I didn’t know how to write fiction,” says Pike. “I’d been a memoirist, I’d been a journalist, I wrote for City Paper for a while. The next step was, ‘Holy crap how do I write fiction?’ So it took me about six years from the time I found that book about Merlin until the time I was selling the novel.”

Pike credits Charleston’s generous writing community — especially the cadre of supportive local women authors — with helping her write The Lost Queen. “I’ve been able to become a part of a community I never found in Manhattan and I don’t know if it exists anywhere like it does here,” says Pike. “The women writers — it’s a tribe. When I was struggling to write a followup to Faery Tale, I told Mary Alice Monroe that I couldn’t write fiction. She and Patti Henry said, ‘Look, this story was meant for you, we’re here for you. You need to try and write it, we’ve got your back.’ And they have in every way; that is something that’s really hard to find.”

At over 500 pages the novel covers a lot — we’re talking coming of age on steroids here. Between Languoreth growing up, being married off to a king, and dealing with being the twin of someone who’s essentially a wizard, there’s a lot of ground to cover. But Pike knew it was necessary to tell Languoreth’s whole story. “I thought it was important to see her growing up as a little girl and see her relationship with her twin brother,” she says. “And to see this character of Merlin not as a wizard who shot magic from his fingertips, but someone who was a real human being.”

Pike traveled to Scotland to research the places she was writing about, utilizing a process that ultimately is as simple as breathing. “When I go over there to look at historical sites that are going to be in the next book, even though I should be writing every day and hitting a daily word count, it’s impossible for me to write and research at the same time. And for a long time that was frustrating,” says Pike. “I had a good friend tell me, ‘When you’re researching you’re breathing in. It’s impossible to breathe in and out at the same time. When you’re home you can breathe out.'”

When stuck, Pike always returns to her source materials, to texts that were written 700 or 800 years after the events they described actually took place. There’s texture there, layers from generations of oral history to years and years of written records to today, where our modern comprehension of the past takes on its own sheen. Perhaps that’s the most beautiful part of Pike’s novel, the richness of the words, the feeling behind sentences that detail real life events that took place so many years ago.

“The events that happen in the book, some of the most traumatic events really did take place,” says Pike. “It’s difficult to write when you get attached to a character, and you know their fate. And you have to show it. Playing out that fate could be excruciating. I’m writing about last breaths and then it’s time to go get my son from daycare.”

There it is — the transcendence from novel to reality. If I found myself lost in Cadzow, surely Pike had trouble finding her way in and out. To hear her tell it, though, her books have lives of their own. “On the writing side of things, my books sort of do their own thing,” says Pike. “Faery Tale is a strange little book, it’s been out since 2010 and it still sells one to two copies a week. It’s just that people find it. Now, with these books there’s more of a momentum building, the people I’ve become friends with have invited me to do workshops on the creative process. I did a Scottish workshop because of a woman who wrote me. Life is so funny that way, she said, ‘Would you like to get together if you’re in Scotland?’ If you can just trust that process, the sense that maybe there is a larger force that guides us in our work. It’s kind of like magic. That’s the real kind of magic.”