Shonuff puts a funky spin on rock and reggae 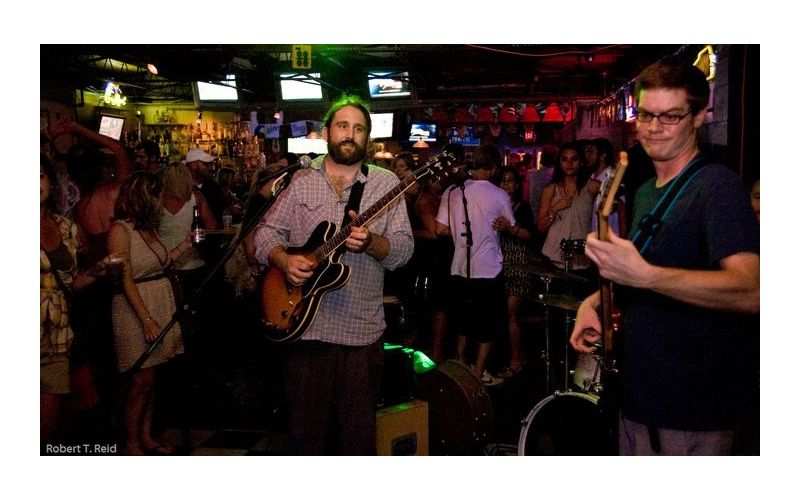 Struggling to find the right name for his latest band project, Madison Ruckel, lead singer and guitarist of local rockers Shonuff , had an "A-ha!" moment last year and went with it.

"We went through a lot of bad names in the past," says Ruckel. "And last year, we thought about changing it again, and [Home Team BBQ co-owner and booking agent] Tony McKie was like, ‘You kind of have a name in this town now, don’t do it.’ And I said, ‘Nahh, come on,’ but then I did a friend poll, and they all said not to change it. Apparently, there were people who knew of us that we didn’t know. It’s not my favorite name but we stuck with it."

Regardless of whether he likes it, the moniker has an awesome back story.

"It’s from the movie The Last Dragon from the ’80s," says Ruckel, who "daylights" as the executive chef at Home Team in West Ashley. "It’s an all-black kung-fu comedy. The star’s name is Bruce Leroy. The bad guy is the shogun of Harlem, and his name is ‘Shonuff.’"

Ruckel has been playing clever medleys of funk, blues, soul, and classic rock songs with keyboardist Jon Hager and various other members for four years, but they’ve recently firmed up the band rotation. Their current set features a mix of rock and blues classics plus a few originals.

"One day this kid named Jon Moore started working at the restaurant," says Ruckel. "He’s been our bassist for the last six months, and he’s been great."

Along with drummer Stratton Moore (no relation), the combo has two gigs on back-to-back nights this week. The band plays with 54 Bicycles at the Pour House on Wed. June 29, followed by an album showcase of Bob Marley’s iconic 1978 collection Babylon by Bus at Home Team on Sullivan’s Island on Thurs. June 30.

"We were booked for that Thursday a long time ago," says Ruckel. "Tony started doing Island Reggae Night every Thursday over the spring, so he asked me if we wanted to keep the gig. He told us we had to do a reggae album, and I jumped at the chance to play my favorite one, which had all the best Marley songs on it. We got John Picard to guest on drums with us, plus a few surprise guests."

Ruckel can hardly control his giddiness about the shows. "I don’t know which one I’m more excited about," he says. "Between the Marley and the Pour House, they’re both just going to be great."