Shon Dale-Jones meets his match in Story of a Rabbit 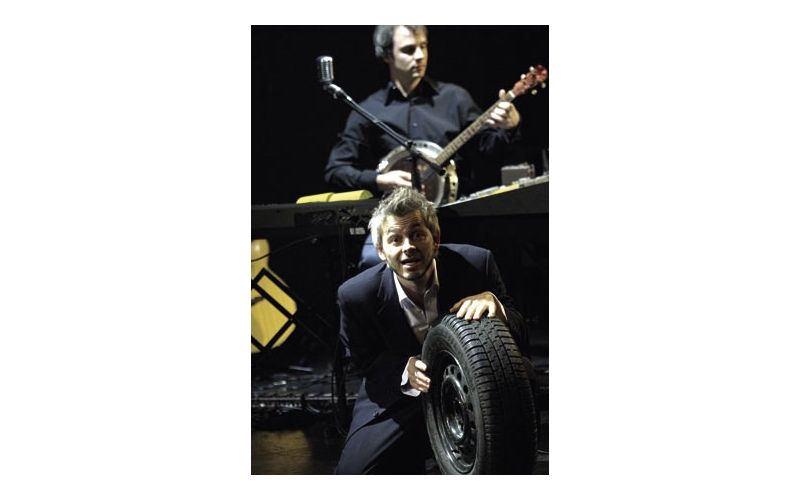 Death is funny. Sometimes. When the context is right.

Mel Brooks probably said it best. Comedy is like falling through an open manhole and dying, he said, while tragedy is its categorical opposite: death by a paper cut.

Shon Dale-Jones knows the difference. That’s why he laughs when Story of a Rabbit, his one-man play to be performed at the Spoleto Festival, is compared to As I Lay Dying.

William Faulkner published that morose, modernist, and stream-of-consciousness novel in 1930. In it, a character named Vardaman, the youngest of five impoverished Southern children, catches a big fish after witnessing his mother’s dying breath.

But Vardaman gets a little confused. You see, he’s not too bright. Kinda slow. He puts the fish in a box. His mother is in a box. One of them — fish or Mom, he can’t remember quite right — stopped breathing. So he thinks some air holes might help.

He drills a few. Into the coffin lid. You can imagine where the drill bit goes.

Vardaman’s two addled minds collide, culminating in one of the shortest, most surreal, and tragic chapters in American literary history.

“My mother is a fish,” Faulkner wrote.

Something similar happens in Rabbit.

Dale-Jones, as his alter ego Hugh Hughes, recounts the time he found a dead rabbit in the garden on the morning Dale-Jones’ real father died.

“I actually did find my pet rabbit dead in the garden,” Dale-Jones says from the United Kingdom. “It had rigor mortis.

Story of a Rabbit is a charming and sentimental mixed-media comedy of life told from the perspective of death. In the story, Hughes’ father dies a spectacularly theatrical death: as a high-flying acrobat attempting a stunt never before attempted.

As he expounds on memories of his pet, grainy video alights a screen behind him of scenes from real-life childhood. The images are on old Super 8 film. The effect is of a nostalgic metaphor of grief. The bunny turns out to be a stand-in for dear old Dad.

“But the use of media is very self-conscious, so that a great deal of comedy comes out of it,” the actor says. “It’s light-hearted and comic, almost homespun in tone.”

Dale-Jones was born in Wales on the island of Anglesey. He studied acting in Paris, where he met his wife, Stefanie Müller. Together, they founded Hoipolloi Theatre.

The couple’s first acclaimed show was Floating, a surreal comedy about Anglesey breaking off from the mainland and drifting off to sea. It was based on an April Fool’s newspaper article Dale-Jones mistakenly believed as a child. Then came Story of a Rabbit. Critics hailed them in 2007 at Edinburgh’s much-ballyhooed Fringe Festival.

Dale-Jones has dabbled in stand-up. Making people laugh is a priority. But so were stories, the telling of personal stories. And to do that, he needed some distance. Much of his life, such as his dad’s untimely death, was just too painful to take straight on.

The solution? An alter-ego by the name of Hugh Hughes.

“He came from a desire to make people laugh and from a desire to reassess how we tell stories,” Dale-Jones says. “He took on a life of his own. His world is very broad and started taking on themes and other characters. Soon enough, we were talking about my dad and a dead rabbit.

Fortunately for us, there’s no drilling involved.

René Marie is an American beauty

On Friday night, Spoleto’s final jazz concert of the year opened with an unusually hushed number and gradually accelerated into complex and soulful pieces which stirred the emotions of the sizeable Gaillard Auditorium crowd. Making another return to Charleston (after a recording session and Spoleto Jazz concert at the Cistern in 2007), elegant and affectionate […]

A new ordinance banning distributing sampling along King and Market street sidewalks went into effect on Wednesday. Councilman Harry Griffin was the sole vote against the measure. Source: P&C Turns out that nearly one of every $6 that Richland County plans to spend on roadway projects will benefit the University of South Carolina. Source: The […]

Farmstand will pop-up at Dashi with local produce on Dec. 5 and days later, &Lobster will takeover Dashi’s kitchen for dinner.

Newly elected S.C. Rep. Chardale Murray may be the first woman to represent House District 116, but it’s hardly her first time charting a course for herself. The Democrat from Hollywood heads to Columbia as the hand-picked successor to Rep. Robert Brown, who retired after 20 years in office. District 116, a rural district, includes […]