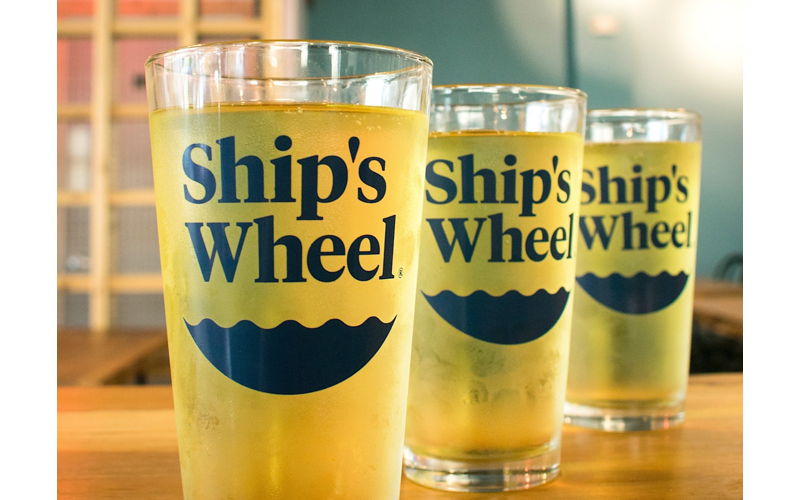 “It’s all about balance and intention, right?”

John Jamison, the chief cider maker of family owned and operated Ship’s Wheel Hard Cider, asks this rhetorically. We’re standing in the back of the cidery next to the brand spankin’ new press which John will use to crush apples brought in from smaller orchards. John, his dad Scott, and I nod in unsion. Cindy Jamison, John’s mom, ducks into the walk-in while we’re chatting about the peach juice they just got — “they’re South Carolina and Georgia peaches, we’re gonna try to make peach wine.” Scott adds, “there are a lot of apple based ciders that also have peach in them — the idea here is a lot of flexibility.”

It’s very clearly a family affair, this cidery. Cindy and Scott act as the company’s general managers; John is the cider maker with the science mind and artistic proclivities; brother Andrew is the director of market development, working closely with their distributor Bear Island; and sister Maggie, while a full-time marine biologist for SCDNR, manages Ship’s Wheel’s social media and special events on the side.

The Jamisons are very, very close to opening Charleston’s first cidery production facility and taproom in Park Circle at 1033 E. Montague Ave. in a building that once housed an appliance parts store. When we visit mid-August, the 900 (“or maybe 1,000”) square foot taproom is nearly complete, featuring rough hewn hand-made wooden tables and a “Tap Room” sign purchased at an auction from the old Closed for Business. There’s a small kitchen to the left of the bar area, which food and bev vet Kurtis Bishop will oversee. They’ll have some pressed sandwiches and small plates, says Bishop, and they’ll always be sure to have a gluten free menu item. That is one of the cidery’s draws, after all.

When we first wrote about Ship’s Wheel two years ago, John said at the time, “If you look nationally, cider is a growing category, I think it’s something we haven’t seen in Charleston primarly because we’re not an apple growing state. The culture hasn’t grown up around it as much.”

The Jamisons, who moved to Charleston from apple country (Nelson County, Va.) about a decade ago, did grow up around cider, and not the sickly sweet kind. Ship’s Wheel has been making, bottling, and distributing their three core brands — Original Blend, Dry Hopped, and Summer Splash — since 2017. All veer more dry than sweet, and John hopes to get into even drier territory with their new facility.

“What we like about cider as a product category is that most people don’t know how broad it is,” says Scott. “We’re trying to reel them in [with the core brands] so to speak.” And while gluten free folks and middle of the road sippers will be drawn in by this sleek Middleton Group-designed building slinging crisp hard cider, John says he thinks there’s a true blue cider crowd out there, too.

“There are a lot of people here who do like cider, people who have come up to me and said ‘I’ve been waiting for a place with good cider,'” says John. “I say ‘OK cool I hope to live up to your expectations!'”

The Jamisons and these anonymous cider lovers are not alone — the cider industry is growing nationally. The United States Association of Cider Makers (USACM) recently created a pommelier exam. Yes, like the test sommeliers have to take, but for cider instead of wine. According to the USACM, the New York Cider Association is working with Cornell University to create the “Orchard Based Cider Dryness Scale” which will translate the science of cider making and its products into a 1-4 scale which can be “replicated on bottle labels and drinks menus.”

Wine making and cider making are very similar, the Jamisons point out — fermented fruit and all that. Scott says the cidery is even labeled a ‘winery’ by the state. But there are three key differences: predominant acid (tartaric versus malic), tannins (found in the grape skin versus the flesh of the apple), and sugar (more sugar content in cider, given the shorter fermentation period).

Scott says that Ship’s Wheel will use different apple blends depending on availability based on location and apple crop, and on what kind of flavor profile they’re going for. The Virginia blend is four apples, for instance. “If you want a more traditional single varietal, the Winesap apple is common because it has medium tannins, a nice amount of sugar, nice amount of acid,” says John. “Diane Flynt, who won a James Beard Award for cider making, she always talks about the three legged bar stool of flavor — you have to build something that has some kind of balance.”

In addition to their people pleasing core brands, the Jamisons say they hope to introduce some interesting one-offs into the mix, single varietals that are a bit more “complex,” perhaps using apples that only fruit every other year. They’ll continue to source from New York and Virginia, and are looking into orchards in the Carolinas, too. “When you get to single varietal stuff, you’re trying to let the apple shine through rather than try to produce another flavor,” says John.

As if on cue, an order of bar stools — not three legged — arrives at the back door. The family darts away, all grabbing a few to carry. They start to set them up along the bar, the taproom now fully furnished. Balance, intention. “We were looking for a really long time,” says John. “It just took the right timing, it seemed like a good fit.”