Shining a light on UFO sightings

It Came out of the Sky 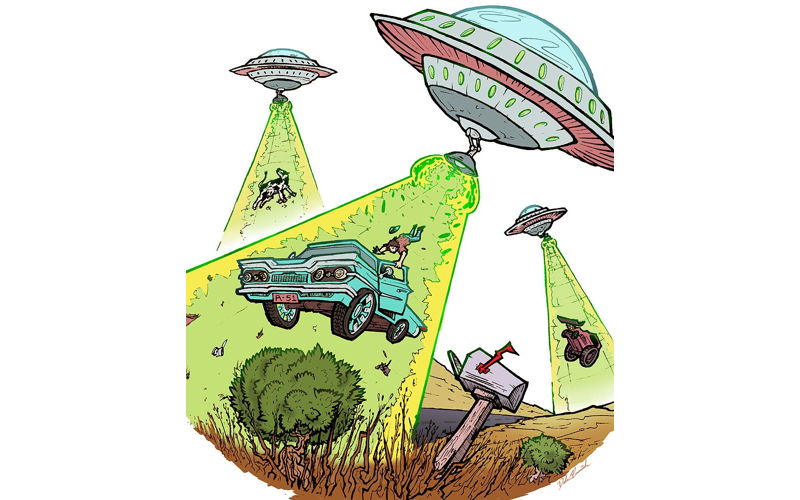 On March 18, 1978, at approximately 1:15 a.m., Deputy Pike Limehouse with the Dorchester Sheriff’s Office was called out to a remote area near Summerville to investigate something that could not be explained. Speaking to a film crew later that year, the officer said that once he arrived on scene he was approached by a North Charleston resident by the name of Bill Herrmann, who told the deputy he would not believe what had happened. Limehouse said he had never seen a man that excited before, as the two stood together in an open field under a half-full moon. The officer expected the worst, but what he got was the unbelievable.

Herrmann, a fresh-faced diesel technician, reported that he had been standing in his yard in North Charleston before finding himself in a field 15 miles away. Herrmann’s employer and longtime friend described him as a good member of his church, his family, and the community. Herrmann later told reporters that he had never believed in UFOs before that strange night in ’78, when he found himself mysteriously transported from outside his home. When it occurred, he was unsure what had even happened, but the gaps in his memory would fill in over the following years.

In 1981, Herrmann shared the story of his abduction with an AP reporter, describing the night that he watched a metal disk, 60 feet in diameter, drop down in front of him. Falling backwards, he told the reporter he was engulfed in a blue light and pulled upward toward the ship. Herrmann said he then found himself alone and afraid in an empty field. He couldn’t recall what had happened. He didn’t know where he had been taken. He told the reporter he felt dirty. He said he felt like he had been around something he shouldn’t have been around. Faced with something he couldn’t explain, he wept.

Herrmann would go on to recount other otherwordly encounters that took place after his initial abduction. He was interviewed by film crews and researchers of the supernatural, but living with these experiences and sharing these stories would take a toll on his personal life in the years surrounding his alleged encounters with UFOs.

“My wife put up with more than anyone would put up with,” he said in a 1981 article published in Greenwood’s Index Journal. “It’s hard to live with someone whose idea of ‘good night’ is to go out and sit in the car with a pair of binoculars and wait for something to arrive.”

But how do you move past such a life-changing experience? UFO sightings continue to pour in from all across the Lowcountry, and many of the people involved just want one thing: an explanation. They just want to know that they’re not the only ones who’ve seen bright lights dance across the night sky. And when they go looking for answers, many South Carolinians end up talking with Cheryl Gilmore, state director of the Mutual UFO Network.

Officially formed in 1969, MUFON investigates and collects data on reported UFO sightings across the world. Ironically, it was that same year that the United States Air Force terminated Project Blue Book, a government program that studied UFOs. Over 22 years, the Air Force investigated 12,618 total sightings, more than 700 of which were never identified.

As state director for South Carolina, Gilmore documents each reported encounter and either assigns the cases to a trained local field agent or investigates them herself. For Gilmore and the other members of MUFON, it’s important to take a scientific approach to each sighting and to gather all the important facts. Of MUFON’s approximately 3,500 members, about 37 are located in South Carolina. Gilmore says her interest in UFOs started in 1959 in her hometown of Fresno, Ohio. Playing in a pasture one day with her cousin, she felt compelled to look up. And what she saw next changed her life.

“Here in this beautiful blue sky was this shiny, silver disc. It was just hovering up there, and it looked like chrome on a car. That was back when there was chrome on cars,” she says. “It was silent, just hovering there. I didn’t feel fear of any kind. We ran back down to the house and told my aunt and my grandmother. They came out, and my aunt said, ‘That’s one of those flying saucers.’ That’s what we called them back then.”

Struck by curiosity, Gilmore went to school the next day and shared the story with her science teacher and classmates. They laughed. She was labelled the “Flying Saucer Kid” until she graduated high school. Fortunately, Gilmore didn’t let the ridicule dim her sense of wonder and her desire for the truth.

“People are more understanding nowadays. There is some stigma related to it, but not nearly as much,” she says.

Most of the recent reports of sightings in the Charleston area involve bright orbs moving across the sky. Last July, an orange ball of light was spotted over Mt. Pleasant. Moving northwest, the orb changed shape before disappearing. Two weeks earlier, a Charleston resident was leaving work when he witnessed a series of lights drift slowly across the sky in what he described as perfect, precise movements. Shifting formation, the lights formed a triangle and eventually faded. Gilmore recommends anyone who sees a UFO to try to take a photo or video with their smart phone, but she says many witnesses are too awestruck to properly document their sightings.

“Your brain starts to go ‘plane, blimp, balloon, birds.’ You’re brain starts to sort through all these different categories because it’s so unusual. Then all of a sudden you realize it isn’t any one of those things,” says the 70-year-old investigator. “A lot of times, the sighting duration will be really short, so by the time your brain has computed through all of that, it’s gone.”

Those who experience a UFO sighting can submit their report on MUFON’s website, including information such as time, place, physical description, and any sketches of the object. The organization is always looking for new members who can undergo training to become a field investigator and carry on the torch for future generations.

“It’s a credible organization. We’re all serious-minded people who are interested in this subject and have been for many, many years,” says Gilmore. “It’s sad to say, but the UFO community is an aging community. It seems to be harder to get the younger people interested in it.”

She adds, “I don’t know whether it’s going to keep going.”

After years of studying sightings, Gilmore remains reluctant to say she believes in UFOs as most people understand them, but she believes that there is something that has been interacting with this planet for thousands of years. It could be a force from outer space, another dimension, or time travellers. She doesn’t have a definitive answer, but Gilmore knows there is something out there. And for those unwilling to entertain such possibilities, remember Hamlet’s words to his skeptical friend: “There are more things in heaven and earth, Horatio, than are dreamt of in your philosophy.”