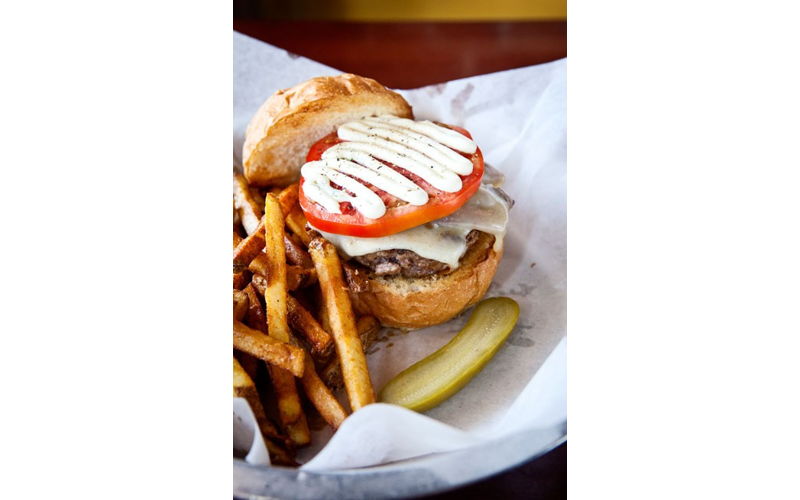 Chefs rely on the written word as much as any sort of kitchen tool. A dish could be perfect in every way, composed of the finest products and showing off techniques that take years to master. It could be fried, sautéed, or the result of a gastronomical experiment that offers the eater an experience they’ve never had before. But the customer will never know how spectacular a dish is unless they order it first.

That’s where the description comes in. Chefs have a finite amount of space to get their point across, and even veteran chefs have to work out the kinks of their wording. Fortunately, along the way they’ve picked up a few tricks to ensure that their dishes succeed.

“Who would have ever thought chicken gizzards would sell?” Robert Carter wonders. In fact, they’re the most popular dish at Carter’s Kitchen. He wanted to put something on his menu that was challenging to guests.

“People are willing to try it. Some people are not, but once they try it they come back for it,” he says.

But no one was interested in the boudin sausage Carter tried to sneak on the menu recently. He thought the classic Louisiana product would be right up his customers’ alley, but he was wrong. Maybe he hasn’t found the right context for it yet.

“You can change a sauce and it changes things,” Carter says. “You could do boudin with fried shrimp fritters, and it would change the whole dynamics of it, or crispy popcorn crawfish with boudin sausage, and you’d sell the bejeezus out of it.”

That ties into one of Carter’s biggest observations about menus: “If you put a seafood and a seafood together, you’re going to sell out,” he says. Like fish with a crab risotto, or with crab butter, or with crab fritters. And if he adds his lobster crunchies — lobster essence folded into tempura batter with fine pieces of lobster, then dropped into a deep fryer — to any dish, it’s suddenly all the more desirable.

Speaking of Bob Carter, one time he burst into the kitchen of Wild Olive to chastise his former Peninsula Grill sous chef, Jacques Larson. The pork arista with butter bean tonnato salad that the Johns Island restaurant served last spring and summer played off the classic vitello tonnato, showing off Larson’s talent for fusing traditional Italian cooking with a Lowcountry framework. Still, it wasn’t very popular. “I don’t know if it was the wordage or conceptually it was so different, but it never became a huge seller,” Larson says, and Carter was eager to point out the younger chef’s shortcomings. “He said he didn’t even see it on the menu and that it didn’t stick out,” Larson says. “He said it was probably one of the best salads that he had ever tasted, and he just kind of chided me for having the description be as it was.”

Larson tells his servers not to list every ingredient at the table, since most people tune out after the third item. Often, they make their decision once they hear “veal” or their eyes will cross once sweetbreads get mentioned. “When I go out to eat, if I read something I’m not sure about, I guess that kind of sparks interest for me,” Larson says. “But you forget that for a lot of people, when you start dealing with terms, especially Italian terms, for a lot of people it’s threatening, and they don’t even want to venture there because they’re out of their comfort zone.”

One thing people definitely don’t want to know is in their dinner: anchovies. And they have a right to be fearful — too much and your food tastes like a “fish farted in your mouth,” as Larson says. Still, the ingredient adds a great balance when used properly, so the chef inconspicuously leaves it out of most descriptions. Otherwise, “all of a sudden you have everyone and their brother asking, ‘Can I get it without anchovies?'”

Every week at Big Gun Burger Shop, Austin Kirkland comes up with a new Meatbangers Ball Burger special. “I try to do something that I think we can sell a lot of, so something that appeals to the masses,” he says, but there’s still a lot of room for creativity. “I try to do it different from what we’ve done in recent weeks. And then I want there to be a wild side to it. I want people to be like, ‘Oh, that sounds crazy, let’s try it,’ like a boar or an ostrich patty.” Kirkland has found that the wackier an item is, the more likely people are willing to try it.

The same wasn’t true when Kirkland tried to play off one of the most beloved and traditional meals: meatloaf. Kirkland caramelized sugar on top of individual loafs and smothered them with tomato gravy, smoked cheddar, and bacon. The sandwiches didn’t move, but other weekly specials have been much more successful, like a burger covered with applewood-smoked bacon, caramelized onions, havarti cheese, heirloom tomatoes, and dill mayo. “People went crazy over that, and even after the special ran out they would ask for it,” Kirkland says. Now it’s on the regular Big Gun menu as the Bungalow Burger, along with the Towering Inferno (barbecued pulled pork, queso fresco, and habañero slaw), another successful Meatbangers Ball special.

The only dish that’s been on Kevin Johnson’s menu since the Grocery opened is the fried oysters, which are adorned with bread-and-butter pickles and a special deviled egg sauce that you won’t find at most oyster joints. “One of the great accompaniments to fried seafood is a remoulade sauce or a tartar sauce, and the similarities are pretty close between all of them,” Johnson explains. “[The deviled egg sauce] is thicker and eggier so to speak, but it’s not too off the wall considering deviled eggs have almost the same ingredient structure as a classic remoulade sauce.”

Other menu items have been less popular. While Charleston may be a culinary capital, the city is still evolving as a food community, and Johnson has trouble selling rabbit, offal, and other unusual proteins. “There are a lot of adventurous eaters but maybe not quite as many as you would think in kind of a big food-forward city, so to speak,” he says. But he’s found that attaching familiar terms to the unfamiliar will help move a dish. “I know that adding the word osso bucco to a lamb neck will triple its sales,” he laughs. Beef cheeks don’t sell well on their own either, until you tack “pot roast” on to the description. The same goes for veggies — they sell better with “wood-roasted” in front of them.

But the biggest miss at The Grocery may be the format of the menu itself. When it opened, Johnson wanted to create a restaurant that a customer didn’t have to go to for a particular reason. “We wanted it to be the kind of neighborhood place where you could go grab some appetizers at one time and then go grab a bigger meal another time,” he explains, which is why he included smaller entrées on the menu in addition to larger portions. But when the smaller plates arrive at the table, it can be confusing for unfamiliar guests. “The backlash and confusion and uproar I got was startling,” says Johnson, who’s been tweaking the concept as he goes along in an effort to expertly guide his guest’s expectations.

Xiao Bao started as a way to satisfy our own late-night cravings for Asian foods we loved. We wanted to capture the flavors we discovered during our travels and to revisit the comfort foods of Duolan’s childhood. The Chinese term of endearment, “xiao bao” was the perfect way to sum up our journey across Asia. We wanted to tell a (love) story about traveling to other parts of the world, yet discovering that sense of home in each bite.

The menu makes the first impression