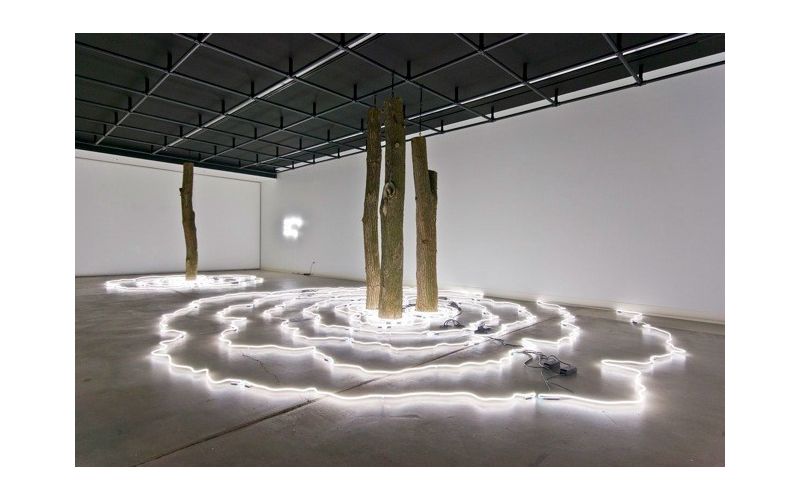 You could call Keith Lemley a scientist’s artist.

Lemley works in the unusual medium of neon, making and bending glass tubes filled with the glowing gas, and then working the pieces into installations or sculptures. An exhibit of his neon sculptures, which vary from abstract, scattershot designs to discrete outlines of objects like axes, can seem more like a huge science experiment than an art show. But of course, as dedicated scientists know, the chasm between art and science is not nearly as wide as we like to think it is.

Lemley himself is a testament to this. He started his college career as a chemical engineering major and says he always loved lab work in both high school and college. He began exploring neon while pursuing an MFA at the University of Wisconsin, which is one of only a handful of schools equipped with neon facilities. “Initially, I was drawn to the process of making it,” Lemley says. “I’ve always enjoyed glass blowing, and the possibility of creating tubes of glowing electrified gas in any form I wanted was very exciting.”

After graduating, he taught sculpture at the University of Wisconsin-Green Bay and at Bucknell University, all the while continuing to work in neon. Neon labs, as you can imagine, aren’t easy to find, so he spent time creating work as a visiting artist at the University of Wisconsin and also worked at the Neon Sheriff’s lab in Atlantic City. Recently, Lemley finished building his own studio south of Pittsburgh, Pa. The show at Redux is the first one that he’s made completely in his own space.

One of the most striking motifs in Lemley’s neon collection is his combination of the glowing tubes with natural objects, specifically tree trunks cut into logs or slices. His interest in the technique can be traced to his childhood, which was spent partly on his grandparents’ farm in rural West Virginia and partly in the suburbs of Harrisburg, Pa. “Everyone’s creative process is guided by … what they find fascinating,” he says. “Being outside in the woods, caring for animals, chopping firewood … were paralleled by reading, messing with computers, etc. I appreciate both a well-written section of computer code and a well-stacked wall of firewood and see the beauty in each.”

When these two opposing forces of artifice and nature are juxtaposed, they enhance and change each other in myriad ways. The light created by neon is uniquely warm, filling the space it occupies with a soft glow that mimics bright moonlight, and what better place to enjoy moonlight than in a natural environment? But at the same time, Lemley says, neon is inescapably the “ultimate symbol of artificiality and man-made objects, so pairing it with natural objects creates an inherent tension.” It’s a tension that one could safely bet Lemley is familiar with, since he borrows from both the periodic table and the ancient art of glass-blowing to create his pieces.

Though the artist also paints, draws, and uses photography, the show that he brings to Redux will consist mostly of large-scale installation work. “I will arrive with crates of neon, transformers, and other materials that will be installed based on the particular architecture and a viewer’s path within it. I have an idea of what it will be like, but being in the actual space will dictate the final form … No matter how much I prepare, it always happens in that space, at that time, and then after a few weeks everything is gone, with only a fleeting memory and images left behind.”

And maybe, since this is neon we’re talking about, some afterglow.