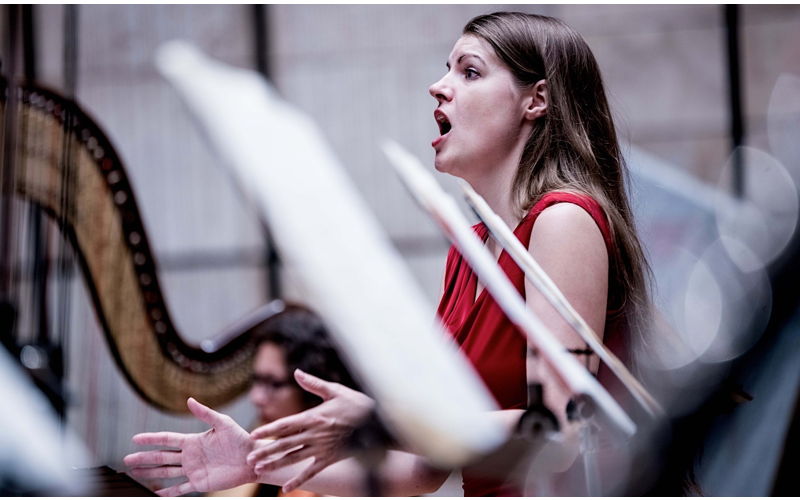 A Head of the Curb

Salome made its point immediately last night. The band halted their pre-show tuning, the audience silenced in response — and “Another One Bites the Dust” started playing over the speakers as the curtain rose to reveal a geometrically uneven stage. One character does a line of coke and the orchestra begins performing Richard Strauss’ classic composition.

This might sound like the beginning of an iconoclastic reboot of the opera, and in some respects it is. But for the most part Salome sticks close to its source material until it doesn’t. Then all bets are off.


The shock-opera about young Salome falling in love with Jochanaan (or John the Baptist), being rejected by him, and demanding his head on a silver platter can still surprise audiences 100 years later.

Maybe the most startling aspect is the way it continues to provoke thought. With a few minor (and two major) creative liberties, Directors Patrice Caurier and Moshe Leiser create an entrancing feminist statement about men with too much power doing basically whatever they want. Even the good Christian Jochanaan slaps Salome several times when she makes a sexual advance on him.

The duo take advantage of the modern setting, without becoming obsessed with the time period shift. People are in suits, there are guns, but Herod thankfully never takes the stage on a hoverboard while his daughter gabs about Instagram.

The modern times serve more to emphasize the characters’ actions in today’s world. But, saying too much about the changes will spoil the surprises — and there are plenty.

These changes may be rejected by purists, but the audience didn’t show any signs of disapproval. In fact, the opera’s jokes landed, people were enthralled with a creative set change, and a revamped “The Dance of the Seven Veils” still shocked.

Let it be known: there’s a strong new energy to this opera, thanks to the actors. Paul Groves is an animated dirt-bag as Herod and Melanie Henley Heyn is scared, but strong as Salome. There wasn’t a bad performance among the cast. The singing had the staunch professionalism expected from world-travelled opera vocalists.

And the production … the production. The offset stage is disorienting, literally and figuratively. There’s no balance in the world the audience steps into and they know it from the jump. A smaller stage is lowered onto an actor’s head, for God’s sake. Even the placement of the characters on stage seems artfully precise. For fans of visual mediums, this is a must see.

The biggest complaint with Salome is that the original work slapped a few snags. There weren’t too many memorable music moments and the last act is prolonged when we already know Jochanaan’s fate. These felt like minor complaints when taking in the show’s spectacle. The set design and extra bag of tricks help glide over the music and the extended finale does help build up tension to Salome’s first kiss with the head of her beloved.

The opera remains a crowd-pleaser, relishing in its own spectacle. It’s still a pulpy story about lust and murder, and the production team knew that. The directors and cast have so much fun with the material that you don’t realize how much you feel for the characters until the wild ending.

The most telling part about the opera’s power is how the small things stick with you after exiting the theater.

Late in Salome, the title character can’t contain the myriad emotion she feels. She’s been beaten and humiliated by the man she lusts after and abused by her father-in-law.

“There aren’t enough dead men,” she sings while awaiting the beheading of her love.

Granted, this moment is taken somewhat out of context — so why is it difficult to forget?

When director John La Bouchardiere saw Path of Miracles for the first time, he had a few questions. “My first experience of it, in glorious medieval basilica outside Paris, was beautifully cathartic and musically satisfying but I didn’t really understand what was going on, even though I had the printed text in front of me,” he recalls.