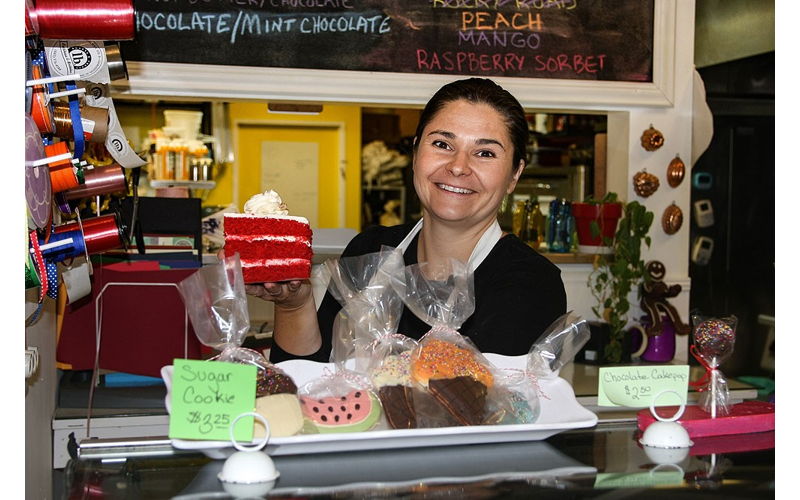 Charleston is such a foodie town that food and beverage superstars are hiding in plain sight, out of the James Beard limelight, but still very much creating and serving amazing food and drinks. This series profiles Charleston’s “hidden F&Bs.”

For Robyn Luckhaus, it all started with a flag cake from her mother’s Southern Living magazine. You know the one — sliced pound cake with berries and whipped topping arranged to look like the American flag. Luckhaus had fun baking, and she certainly liked to eat. But it was just a hobby until a “quarter-life crisis” made her re-evaluate.

“Cooking was all I could think about and I thought if you’re going to put in 40 hard years, why not make it something you like,” she says.

That thought sent her to Johnson & Wales in Charlotte to study baking and pastry. An internship brought her to Kiawah Island and, years later at the Sanctuary, she met Larry Brubaker, who would become her partner when the two decided to open Luckhaus & Brubaker Sweets & Treats in 2013, a tiny shop decorated with bright primary colors and fresh cookies under domed glass.

Favorite kitchen tool or gadget: My side towel. I cannot work in a messy station. It’s really nice to stop, wipe the station down with a clean rag and mentally restart.

Favorite after-work hangout: Crust, across the street. It’s got good food and it’s easy to get to.

Favorite Charleston restaurant other than yours: That’s probably where I had my last meal, which was Poogan’s Porch with some really good friends.

Comfort food: Soup. It’s never something sweet. I have a salt tooth more than a sugar tooth and I don’t keep sweets in the house. I’d rather have some crusty bread and cheese. You do get burned out on sweets when you have to do ice cream batch tasting at 9:30 in the morning.

Favorite smell: When a pie’s in the oven, I do love that smell.

Favorite drink: Ice water. I drink a lot of it during the day.

Number of hours you work a week: I stopped counting when I stopped getting paid hourly, but if I had to guess, I’d say about 70.

Customer pet peeve: I like when customers give us creativity (to come up with desserts) but when it’s a little too open-ended, like ‘I don’t know, you come up with it,’ it’s a little frustrating. A little guidance is helpful to make sure they’re not disappointed.

Most under-rated ingredient: Salt. You would be surprised how much goes into our bake shop. It’s kosher salt when it’s in a product, and Maldon flaked sea salt when it’s a finish.

Favorite meal to cook at home: I like sauces. I like a pasta dish that can cook all day and you don’t have to babysit it. Plus, it makes the house smell good.

Best advice a mentor gave you: It was one of the first chefs who hired me. I was saying how excited I was and she said, “You know what? It’s a marathon not a sprint. Pace yourself. Do it right, and be in it for the long haul.”