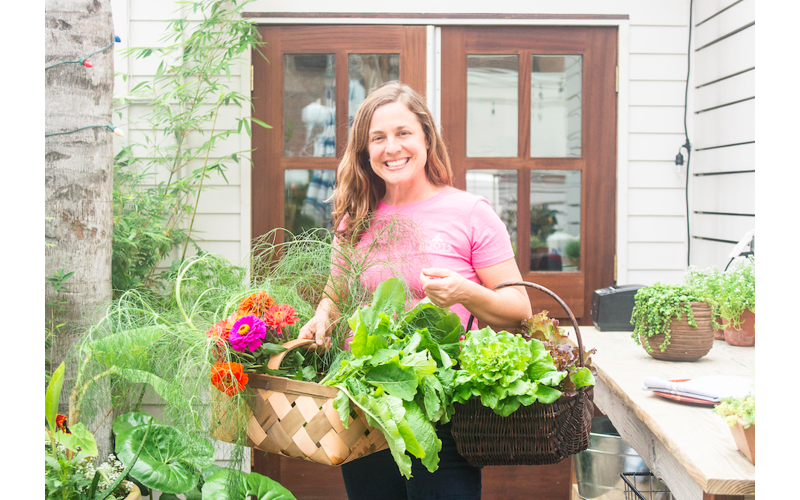 Founded in 2011 by Rita Bachmann, Rita’s Roots quite literally helps Charleston get back to its roots. Bachmann and her team help the home gardener and the community alike with growing customized, organic gardens. You may have noticed her handiwork while sipping rosé in the Le Farfalle courtyard or while twirling sweet potato noodles from a Rainbow Bowl at Basic Kitchen. The produce grown at these restaurants plays a starring role in their provisions. Rita’s Roots also helps the home gardener build lasting backyard gardens based on the home’s soil and surroundings. “We do the dirty work, and they get to harvest,” says Bachmann.

Bachmann graduated from College of Charleston with degrees in political science and sculpture. Like many uncertain undergrads, dabbling in several subjects became a process of elimination rather than a straight shot career path. “Political science really made me question what my place would be in the world. I knew I needed to do something that was good for the earth, good for people, and good for myself,” she says.

She’d long wondered where the food she ate came from, who produced it, and how it was produced. Answering the call of curiosity, she traveled from the Lowcountry to the Catskill Mountains in New York to take an apprenticeship on Mountain Dell Farm. “It was the longest, hardest, most physically taxing work,” she says. “But there was such a joy in growing my own food, in seeing where it comes from, in the taste and freshness and abundance. I was hooked.” Through farm-given knowledge and work ethic, she built the foundation for her business.

The Roots team offers several service options from a general garden assessment to full-blown installation and maintenance. Le Farfalle’s Caitlin Toscano says Bachmann and her crew are like “veggie ninjas who’ll sneak in and out of the garden to maintain and check up.” Every plantable season, Bachmann swings by the restaurant to talk veggies, fruits, and herbs. “I’ll give her a list of what we’d like to use in our dishes and cocktails,” says Toscano.

“She’ll come in and plant and tell me how to maintain and when to harvest. And there are always herbs. We consistently have rosemary and oregano and sage. We use all of it at the restaurant.” Head over to Le Farfalle during the spring season, and you’ll find freshly blossoming Meyer lemon trees in the courtyard. They carry a scent so wonderfully sweet, it rivals confederate jasmine.

For chef Nick Wilber at Basic Kitchen, Rita’s Roots is a culinary jackpot. The restaurant’s concept is based on honest, local ingredients and healthy choices. You don’t get more local than your own courtyard garden boxes. “Her concept really fits with what we’re doing at Basic with our local focus. It’s about being conscious of what you put in your body,” says Wilber. “The garden has really enhanced the space and connects the customer more to their food. They’re sitting there where we picked the arugula that’s in your arugula salad. I think people in general are moving toward having that real connection with food. It’s been a trend for quite some time.”

Rita’s Roots considers what the restaurants need from their gardens. Bachmann will suggest growing vegetables like kale, for example, that are regenerative rather than radishes which are a single-harvest crop. “We have these planters with huge concrete bases and trees growing out of them, and she would even plant edible flowers or chives and smaller herbs in them,” says Wilber. “We try to get creative and use the herbs in our cocktails. We’ll make sauces and whatever we can do other than chop them up and throw them on as garnish. We had a bunch of fennel growing, and we made oils from the fronds while the bulbs were developing.”

Both Le Farfalle and Basic Kitchen have so much love for their tiny gardens, they’ve redesigned their spaces to highlight them. “We actually had a table built after we installed the garden, so now we use it to host private groups,” says Toscano. “People just love it.” Basic Kitchen built ledges onto the outer edges of the garden boxes where people can rest their drinks or their bones. “It’s created such a cool environment,” says Wilber.

Like Wilber, Bachmann finds joy in getting her hands in the dirt and helping Charleston eat organic. Her work even helps Charleston’s human sprouts develop a palate for wholesome ingredients. “I’ve seen the impact it has on them to work in the garden, plant the seeds, wait patiently for them to grow. Some of my clients have reached out because they want their children involved in the garden, so they’ll eat more vegetables. It really works.”