Ristorante LIDI gets it right with housemade delights 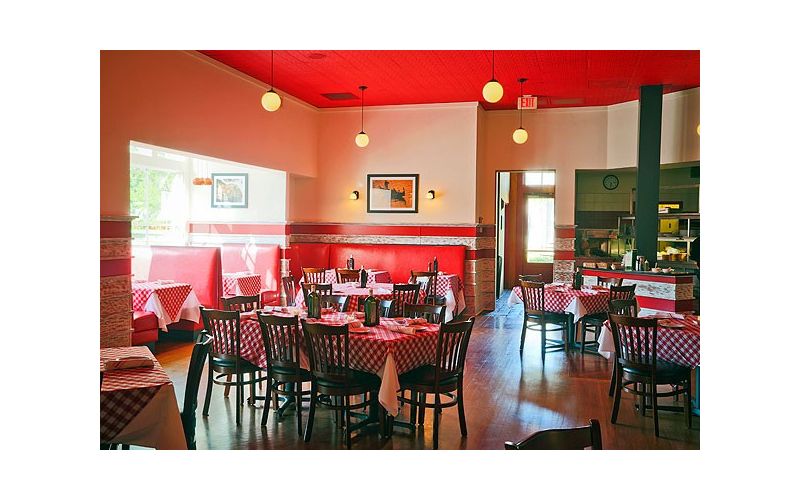 The thought of an Italian restaurant tends to conjure up images of tiny tables adorned with red-and-white tablecloths and preset with tall bottles of olive oil. This proves to be true of Ristorante LIDI (Little Italy Daniel Island). The traditional Italian restaurant was introduced to Daniel Island diners in March by owner and Chef Jason Colon, who hails from Cambridge’s Le Cordon Bleu culinary school and helped to open the now-defunct ‘Cesca restaurant in Charleston.

On both recent visits, the restaurant was bustling and full of energy. My guests and I felt at ease with the nice-but-casual ambience made obvious by the servers’ blue jeans, exposed brick walls, and simple Italian decor. We loved the loudness, too. LIDI is the kind of delightfully boisterous place where friends can catch up, laugh, and linger for a while.

On one visit, my guest and I chose a Venetian Rosé, the Pinot Nero ($26) to start our meal; however, our server returned with Prosecco. After the mistake was brought to her attention, she immediately made it right by producing the juice we wanted, the sparkling pink stuff that tastes like summer. The process was perfectly smooth on the second visit. We sipped wine while perusing the lengthy list of starters, like choose-your-own antipasti plates ($4-21), Italian wedding soup ($6), and arancini (fried rice balls with mozzarella, bolognese, and pea filling, $8). We snacked on warm crusty bread and olive oil during the short wait for the food.

Our server recommended the caprese ($9) and rightly so. The thick slices of housemade mozzarella —and the accompanying red-and-ripe tomato slices and fresh basil leaves — were delectable. The dish was finished off with LIDI’s own first-press extra-virgin olive oil. On a second visit, we had the iceberg wedge ($8), the standard sort with crispy pancetta, pecans, and a creamy Gorgonzola dressing. The pecans didn’t seem toasted to us, as described, but we liked the salad anyway. Meanwhile, LIDI’s angus beef carpaccio ($10) was a beautifully presented plate of raw meat pounded perfectly thin, although our portion in particular was a tad too fatty. We felt the caprese and carpaccio would have benefited from a dash or two of sea salt. It was dressed up nice and pretty with the usual suspects of capers, arugula, EVOO, and lemon aioli, but another crostini or two would have made more sense as it’s only served with two small triangles — the same goes for the mussels marinara ($10). The latter were from Prince Edward Island and served in a simple but garlicky marinara sauce somewhat reminiscent of tomato soup. The flavor of the mussels sunk in after a few minutes and really made the sauce shine. The final starter was the Manila clam ragu ($12). The clams were tender and tasty in a white wine broth with spicy Italian sausage crumbles and arugula, topped off with shaved garlic. It worked.

Shortly after we finished off the apps, our entrees arrived. Some of the options were pasta standards like eggplant parmesan ($13), lasagna (with housemade pasta sheets, $15), gnocchi bolognese ($15), ravioli (house pasta recipe made locally by Rio Bertolini’s, $14), and veal marsala ($18), plus grilled Scottish salmon ($16) and cacio e pepe (their take on mac ‘n’ cheese, $13). On a following visit, we had shrimp scampi with linguini ($17) and pork ossobuco ($21). I’d wanted to try their housemade gnocchi, but the kitchen was out of bolognese. The ossobuco was easily consumed as it fell right off the bone. The buttery mashed potatoes were appropriately understated with the rich veal demi glace gravy. Admittedly I may not have been able to appreciate the depth of flavor in the ossobuco were it not for the robust tastes of Merlot our kind server surprised our table with. It was a first-class move that took the dish, as well as our experience, to another level. The shrimp scampi was simple in presentation, but proved itself in the butter-packed white wine sauce — although with a tad too much lemon for our palates. On a previous visit, we tried chicken milanese ($16) and orecchiette sausage and broccoli rabe ($15). Although perfectly thin, well-breaded, and crispy, the chicken lacked flavor; once again, a little salt would have gone a long way. It was beautifully covered with arugula, capers, tomatoes, red wine vinaigrette, and big slices of raw red onion. Although it was listed under a section that indicated all selections there came with linguini, none was served with this dish. My orecchiette was imported from Italy via New York City, and the soft pasta shells were delicious, alongside the sausage, garlic, red pepper flakes, and broccoli rabe. However, I’d have loved more greens — for both the flavor as well as the presentation.

Although the portions were just right, we had the entrees boxed up so as to make way for dessert. The flourless chocolate torte ($8) sounded decadent, but we opted for the New York cheesecake ($8) and cannoli ($8). The crisp-fried cannoli tube shells are imported from New York and filled with blended housemade ricotta and mascarpone cheeses finished with crushed pistachios and dusted with powdered sugar. The cheesecake was made of housemade ricotta, plus fresh whipped cream and blueberries — a wonderful and weird blend of light and heavy, with hints of citrus zest. The crust was soggy, but the flavor of blended graham crackers and amaretto there was ace and tasted pleasantly of gingersnaps, too. On our return, we shared a tremendous tiramisu, the hints of coffee completely opened up by the small glasses of intensely sweet and potent Evil Twin Biscotti Break Porter our server decided to let us try, again by surprise. We also learned that the Netherlands-based Evil Twin sources regional breweries across the world to create their beers, with this one made locally at Westbrook Brewing.

Our server on our first visit was very knowledgeable and quick to answer our questions, with the overall service swift but not rushed, attentive but not intrusive. The same is true of our second-visit, with someone who was also thoughtful, calm, and funny. He was willing to go to the trouble of providing special extras that made the evening even more memorable, which is how a night out should be. He also offered to bring every dish out individually since we were sharing.

Some foodies may be put off by the simplicity of the traditional dishes, but I’m certain that LIDI is accomplishing what it wants to do, which is providing a casual and comfortable place to enjoy good food and company. With more attention to some presentations and a little more salt, the restaurant is on to something even better. In the meantime, it’s nice to know where to go on the island for refreshing Italian grape juice, some darn fine homemade mozzarella, great service, and some good and loud conversation.