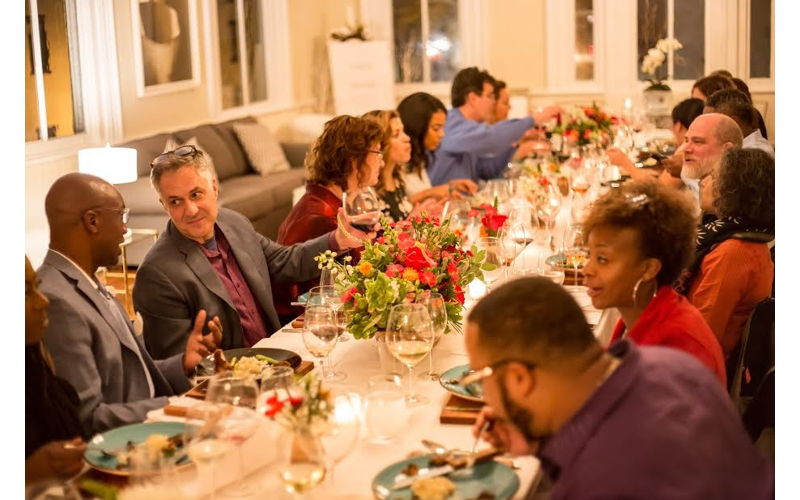 Six years ago, Micheal Sparks and his partner moved to Richmond, Va. from New York City. Sparks, a Pittsburgh native who says he’d never lived so far south, had spent most of his time in cities like L.A., Madrid, and London. “We found it was really hard to meet people.” So, “like every gay New Yorker does,” he started throwing dinner parties. “It became a spectacle.”


The scope of Sparks’ parties grew, drawing guests like Kate Houck — another Richmond resident and owner of The Jolly Good Flower Company — who had a taste for event planning and design. Sparks used her flowers, and Houck quickly went from dinner party devotee to Sparks’ business partner and COO.

The Underground Kitchen (UGK) was born in 2013, and has expanded to nearly 30 cities as far south as Miami, as far west as Memphis, and as far north as New York. This June, UGK was invited to the James Beard House for a “Cultural Collaboration” themed dinner, with four UGK chefs participating in the sold-out event.

I met with Houck and Sparks at the Bar at Husk on a recent Tuesday afternoon to chat about the “roving experiential dinner series,” which is coming to the Lowcountry for the first time this Sat. Oct. 5.

The multi-course dinner will be prepared by Columbia chef Michael Stuckey at a location TBA. The secretive nature of the event — guests find out the location 48 hours before — is all part of the UGK experience.

The experience has evolved, but the mission has remained the same. “We’re giving these incredibly talented people a chance to show their stuff,” says Houck. The goal is to highlight chefs around the country who may not helm a kitchen of their own, talented toques who are stuck on the line or sous 60 hours a week. The unsung and the overlooked.

For example, a past UGK chef is a Richmond burger joint manager. For the series, she came in and prepared an inventive meal of her own creation, drawing on her African-American and Jewish roots.

“We give them the freedom to express themselves,” says Sparks. “We find their weak points and lift them up and show them how to do a proper dinner party.” He pauses, then adds, “We are not five star. We are sexy as fuck.”

This will be the first year that the dinner series has instituted a cohesive, months-long theme for every city.


“She [Bailey] brought this experience directly out of her childhood and created it on the plate,” says Houck. “We know our chefs can do amazing things and they have amazing stories. We said, ‘Let’s turn it to the chefs, let’s challenge them to tell their story in a multi-course dinner.”

This August in Wilmington, Del., the third stop on the UGK New Americana Tour, chef Danielle Harris a.k.a Chef DMH told her life story through the previous, humbling kitchen positions she once held, including working at chain restaurants like Panera.

At another stop, Stuckey, who serves as the executive chef at popular Upstate catering company Southern Way, made his grandmother’s pimento cheese and home-made saltines. “People were like ‘are we really having cheese and crackers?’?” laughs Houck. “But they’re the best cheese and crackers you’ll ever have.”

Guests may or may not be treated to the elevated cheese and crackers when Stuckey visits this weekend — the menu is as secret as the location. But they will definitely be treated to specially curated wine pairings by the team’s in-house fifth generation French wine maker. UGK also aims to feature local and regional vendors, so you may be eating off of pottery made by an artisan in Richmond, or sipping on a beer brewed specially by their beer guy in Fredericksburg. Our chat at Husk is also for research — Sparks jots down the name of the Johns Island farm that supplied the heirloom tomatoes we ordered, as well as the name of our bartender for potential UGK gigs.

“It doesn’t matter who you are when you come together over a meal,” says Houck. In the current landscape of Twitter feuds and prolific trolls, Houck believes that “we are going to need places to start again. If you have a positive foundation to go off of you can look at both sides.”

Sparks says when he first moved to Richmond, he became friends with the head of the local parks system, who offered to take him on a tour of the city’s underground rail road trails. That led to Sparks hopping online to track down his own family lineage, which he was able to trace to Shirley Plantation in Charles City, Va. The name of the dinner series was born from this: A well-traveled New Yorker moving further south than he’d ever been, looking to make connections, and finding, instead, something much more.

“All I wanted was to throw a dinner party,” says Sparks. “And it’s turned into a movement.”

Learn more about where UGK will be popping up next by following them on Instagram, and purchase tickets to the Sat. Oct. 5 dinner here.