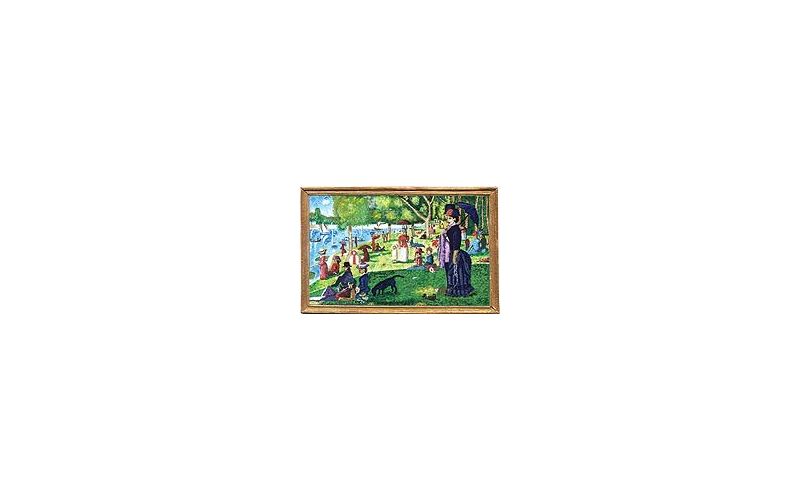 What is it? A vast collection of the world’s finest art. In miniature. Organized by the Halsey Institute and exhibited at the Addlestone Library, the work has been preserved and displayed by students at the Clemson Architecture Center in Charleston. McMahan has been creating these diminutive nuggets for 18 years. In a great big world, it’s nice to appreciate the small things. Here’s to McMahan’s curious trade: We predict a huge reception.

Why see it? Who can resist Mona Lisa’s shrunken face? If the wacky factor is not enough, go for the artistic skill and stupefying replication found in the work. You’ll be able to say you have indeed seen Da Vinci’s masterpiece and not be full of hogwash.

Who should go? Big people and little people. People with good eyesight or glasses. Dollhouse fanatics and stamp collectors. Art lovers wishing for a world in which the size of the market has been downsized.

How does one man painting from his home in Jacksonville, Fla., have such a universal perspective?

Look carefully; the answer might be in front of your nose.

McMahan’s Mini Museum exhibition features over 1,300 miniature paintings that are replicas of the world’s finest art, some of which now reside on canvases no larger than a postage stamp. Miniscule Egyptian tombs, cave drawings, and handmade furniture are included as well.

McMahan is a resourceful artist. Most of his collected paintings have been copied from photographs taken for National Geographic. So while he may not have gone far to see them, the paintings, and by extension McMahan’s work, represent the creative process and all its varied journeys. Examined from this angle, McMahan’s work is extensive not only in its scope, but also by way of its impact.

Take for example the work of Pablo Picasso. National Geographic decided to write a story about his work. A journalist and cameraman were dispatched. When the piece went to print, it traveled to homes across the United States. One of the magazines wound up in Richard McMahan’s hands (He owns every single issue of National Geographic from 1939 to the present). McMahan was captivated; he read the story and studied the photographs. He took his brush and did his best to recreate the artwork. He completed his rendition and kept it in his home. This process was repeated hundreds of times for various painters.

The result is a body of work that stands as a bridge, a bridge that extends across the artistic globe and has now stretched to Charleston.

“The paintings allow me to see the world,” McMahan says. “I want to share my own experiences. And give people a different take on the same old classics.”

Richard McMahan began amassing his Mini Museum of art 18 years ago. Since then he has painted nearly 1,100 distinctive tiny replicas of celebrated artworks. His style usually mimics that of a particular artist — Jackson Pollock’s precise paint splatters or a pop artist’s use of enlarged pixels, for instance — but McMahan leaves traces of his own personality as well.

Most of McMahan’s paintings are the size of a baseball card. The smallest could hide beneath a stamp, while the largest, his version of DaVinci’s “Last Supper,” is the size of a DVD case.

McMahan’s exhibit at the Addlestone Library has received warm curiosity and genuine interest. The diversity of the work — Mesopotamian cave drawings and paintings from the Renaissance to Modernist periods, as well as nouveau furniture and the interior of an Egyptian tomb — is complemented by a unique, attractive display design that highlights the work’s diminutive scale.

The City Paper recently spoke with McMahan from his home in Jacksonville, Fla.

City Paper: Judging from the exhibit’s opening, your work has had a good bit of interest. What type of feedback have you received?

Richard McMahan: Nice feedback, mostly. People want to know everything about the work: how I make them, how long it takes me, which artists I decide to use. So, yes, positive feedback. I did have one inappropriate comment, but I don’t want to talk about that.

CP: So, if the people want to know, can you talk about your paintings?

RM: I start with a picture. I use books and magazines. You know, I haven’t seen much of the actual art in person, as I’ve never crossed the Great Pond. I use 100 percent recycled materials: cardboard, paper. The frames are made from manila folders treated with glue and string. Sometimes I use plastic to simulate glass. When I’m ready to frame, I put fingernail polish on the painting. It brings out the color. And I have to hurry with the frame when I add the string perforation before the glue dries.

CP: How long does a painting normally take?

RM: From hours to days. The one that took the longest was “The Last Supper.” That took two weeks. But I also made two of them. One for me and one for someone who’d commissioned me to make him one.

CP: How do you decide which pieces to paint?

RM: I use what I like. The main thing is the re-creation of the art. But I also like to show stuff people might not know about, someone like George Tucker. He’s a British artist who doesn’t get enough attention, a lot of Dutch Baroque artists, too.

CP: Do you use some kind of system when you decide the size of your paintings?

RM: Not really. It’s what feels comfortable. If a painting is smaller in reality, I do it like that.

CP: Is there a favorite of yours among this collection?

RM: That’s like asking a parent which child he likes the best. You don’t want to make the other children jealous, or upset them. We all know what happened to Cain and Abel. No, I don’t have a favorite. I have very special relationships with all of them.

CP: The Mini Museum runs through the 30th of June. What happens after that?

RM: I want to do more shows. I’d like to have one in Atlanta, and eventually overseas. I’d like to have a show here in Jacksonville. I’ve had small shows at the library here, but I ran into problems because of censorship. Some of the paintings have nudity in them. Eventually, it would be nice to have a show in Kingsville, Texas, where I was born. I lived there only until I was two, so I don’t have any memories. That would be nice, but I’m not sure they have much in the way of culture going on in Kingsville.

CP: Are you working on more paintings now?

RM: No, so much has been thrown in my lap. I’m trying to finish the costumes and props and illustrations for this movie I’m making with my friend. It’s a silent version of an old mummy movie. It’s going to be shot in my backyard. I’m also working on an adaptation of the Book of The Dead. I’m creating Ammut. He’s half-lion, crocodile, and hippopotamus. He devours souls. — Kevin Murphy

Recent college graduate living with parents struggles to write his masterpiece: This is The Mind’s I in a nutshell. But this particular story brings more clarity, more reflection, and less ridiculousness to the creative struggle of the artist than we’ve seen recently.

The Great War by Hotel