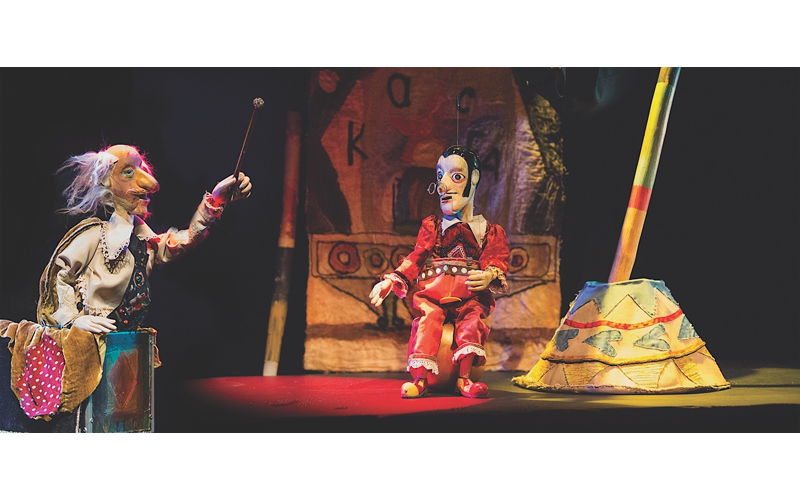 “They are ideal actors,” says Rezo Gabriadze of his main characters, Zaza Papuashvili, who plays Ermon, and Nino Kasradze, who plays the titular Ramona. “They fully inhabit the stage.” Ramona, stationed in the lush and mountainous Rioni region of Georgia, longs for Ermon, who is sent away to rebuild Siberian infrastructure in a postwar Soviet Union. She longs for months, and then years.

“This story took a long time to write,” says the 80-year old Gabriadze, “I plotted it out numerous times on numerous occasions. I kept it all in a folder I carried with me.” When the story, slowly smoldering, took form, it centered around these ideal characters, Ramona and Ermon. The characters, though, aren’t made of blood, nails, and skin. They’re made of wood, glue, and fabric. They’re puppets, hewn by hand the “old fashioned way” with an ax, hammer, and chisel, autonomous figures led by invisible strings. “Puppetry is an ancient art. It dates back millennia. Herein lies their attraction,” says Gabriadze, “I work with them just as our ancestors did.”

At the intesection of Asia and Europe lies the diminutive country of Georgia, an ancient land bounded by Russia, Azerbaijan, Armenia, Turkey, and the Black Sea. The terrain, for such a small country, is widely varied, from the snow-peaked Great Caucasus Mountains to the subtropical shores of the Black Sea. The political terrain is also varied, at times wild and contentious. The country has been at the center of vicious territorial disputes among Persia, Russia, and Turkey, and has seen division within its own borders — just this past April, the “breakaway region” of South Ossetia, officially part of Georgia, held a presidential election and referendum to change its name to the State of Alania.

But even with the nation in a seemingly perpetual state of unrest, Gabriadze finds beauty, and purpose. “Georgia,” says Gabriadze, “like any other ancient country, has a rich folklore that sustains us and, I believe, will continue to sustain our children, grandchildren and their grandchildren for many years to come.”

Gabriadze’s Ramona is a love story between two puppets — two locomotives, to be exact. Gabriadze had his own love affair with this archaic mode of transportation, and knew that the locomotives would be “ideally suited to the puppet theater.” “Locomotives are a man-made invention, something even my grandmother, like any layman, could truly understand: its key elements all familiar to us — fire, water, steam, wheels,” says Gabriadze, “They have extraordinary mechanical beauty.”

In the one-hour production, which is performed in Georgian and Russian with English subtitles, Ramona, a delicate shunting engine, and Ermon, a hulking machine possessing the virility of a solider off to war, must grapple with their separation, evoking the sadness, frustration, and heartache of human lovers. Ramona, in addition to nursing a broken heart, must also deal with a physical limitation: she cannot travel more than 300 meters either way. She finds solace, though, when a circus needs her to tranpsort them to the town of Tskaltubo to rescue their circus tent. But then the troupe’s star tightrope walker is injured, and the circus asks Ramona to make a sacrifice.

Gabriadze first discovered the art of puppetry when he, too, was seeking solace. Living in Georgia during the Soviet era, Gabriadze used puppetry to surreptitiously tell his stories. In 1981 Gabriadze — a graphic artist, painter, screenwriter, director, sculptor, and puppeteer — founded the Gabriadze Theater in Tbilisi, the capital of Georgia. Creating a marionette drama theater in the heart of this anicent Georgian town was symbolic for the artist, “the puppet theatre, which was thought up by the people themselves, has been preserved to this day.”

When audiences see Ramona during its five-day Spoleto stint, Gabriadze hopes that, whether they are fans of puppetry or simply curious theater-goers, they’ll appreciate his message. “I wanted to tell the audience about love. I am delighted and grateful when the audience shares my feelings,” says Gabriadze. He hopes people will be able to connect with the main characters, the locomotives chugging along their predetermined tracks. “Oh and the sounds they make are almost exactly the same as those made by people, animals, and nature itself,” Gabriadze urges, “We humans fully understand the sounds locomotives make: we can have a heartfelt conversation with these sounds. Ask a locomotive if it loves you, it will say ‘yes’ or ‘no.'”