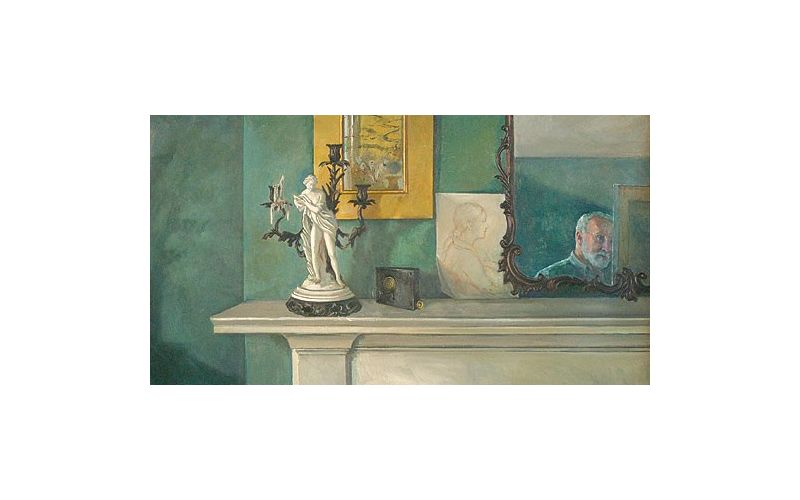 Why would anyone bother with realist paintings of the cracked, down-at-heel sidewalks of Cannon or Line streets? They’re not areas that tourists will recognize. Telephone poles and parked cars obscure any view that could be described as picturesque. Worst of all, those streets are just so damn ordinary.

But what if some of the telephone wires dissipated into the sky, leaving more room for the shimmering sunlight to peep through? What if the dark greens of the trees and houses were accentuated? What if one man was fascinated with the way shadows played on those sidewalks, and found them worth painting?

The results would be the kind you’ll find in William McCullough: Southern Painter, a major retrospective at the City Gallery’s Waterfront Park location. McCullough’s been busy enough to pack the roomy space with substantial realist art. Not every painting on display is perfect, but imperfection’s part of the artist’s approach — celebrating the little flaws in life, like the awkwardness of a timid portrait sitter or cracks in a grimy sidewalk.

Putting the show together was a weird experience for the artist’s daughter, Currie. “We’re using some work from museum collections and private collectors,” she says, “and reuniting with these people was like walking down memory lane for me. My father’s paintings show the places I grew up, the back door of our old house on Rutledge Avenue … because he paints the things around him that strike him as visually interesting, the show’s a real record of his life.”

From the looks of the 120-piece exhibition, the artist has never run out of subjects to paint: landscapes in France, Mexico, New York, and the Carolinas; Southern interiors with rich, humid hues; still-lifes that capture the feel and the form of their objects, rather than being Xerox replications; portraits of family members, acquaintances, and above all, himself.

William McCullough sees the still-lifes and portraiture as a way to keep his hand limber, continuing to hone his skills, though he has nothing to prove after 30 years of professional oil painting. In most cases this would be like a veteran Top Gun brushing up on his kite-flying skills, but McCullough adds something else to his “exercises” — a soupçon of imagination, obvious from his choice and treatment of subject matter and the tangible pleasure that he takes in his work.

You can see a mischievous glint in his eye in “The Self Portrait on Mantle.” A mantelpiece shows two figures — one miniature sculpture, one sketch, and one busy artist reflected in a mirror, his engaged, thoughtful face partially obscured by the canvas he’s working on. He’s kept up the self-portraiture through the decades, so the retrospective dutifully shows his transformation from a fresh-faced art student to a white-bearded workaholic.

McCullough’s willingness to show all of his aspects, from his past false starts to his current assurance, make this show a treat. There are a couple of early, pre-trained tries at painting from the early ’60s, followed by figurative work from his formal training days with Eric Eisenberger, Daniel Greene, and Robert Brackman in New York. “You can see how his work was influenced by his teachers,” says Currie. By the time he painted “The Young Monk,” a 1969 portrait, it’s obvious that he had already achieved a high level of technical skill. Now all he needed was to fall in love.

Back home in South Carolina, a dearth of willing models led the artist to concentrate on rural landscapes. Examples like “Stephen’s Branch Farm” indicate a tendency to romanticize his surroundings, with softer images and lighter, pastelly hues. As McCullough progressed, he grew more confident with his palette and strengthened his brushwork (the thick-layered oils of 2004’s “Lent,” with its gnarly, blasted tree and oil drum, are a good example).

Some subjects haven’t changed at all in the past quarter century. 1975’s “No Parking” shows a figure on a fractured sidewalk, the shadow of a large building suggesting a looming urban environment beyond the canvas. Fifteen years later in “Westendorff’s Store,” McCullough’s technique has become smoother and more consistent, and he’s confident enough to play with the colors of his subject. By placing an accentuated light brown and white building on a blue background, he creates a world that’s less realistic than the ’70s version. The lower angle of “Looking Up Cannon” from 2005 accentuates the sidewalk, walls, and gates, but the tone is optimistic; the grass is greener on this side of the millennium.

By showing the highs (McCullough’s contemporary Charleston landscapes) and the lows (a few early pieces, some stiff-looking figurative work and patchy portraits like “The Blacksmith”) of his life in art, Southern Painter instructs, entertains, and shows what an artist can achieve if he strives to depict the world around him in his own exceptional fashion.

Terry Evans, 66, got his start as a vocalist in church choirs and as a tenor with various doo-wop and R&B groups — including The Knights — in his hometown of Vicksburg, Miss. He relocated to L.A. in 1966 and stayed busy doing gigs with vocal groups and soul, blues, and rock bands. “That was […]

JAZZ, BLUES, & ROOTS MUSIC ‌ Not Only in Homage