Review: Wicked lives up to the hype 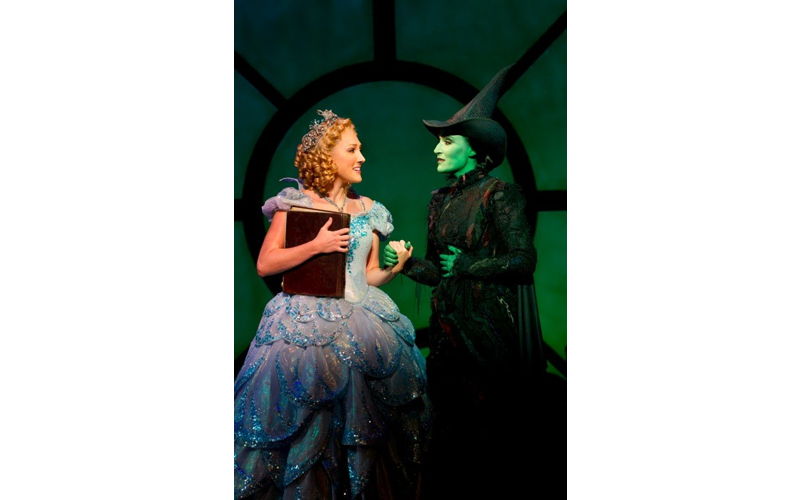 It feels a bit silly reviewing Wicked, a show that’s won numerous awards, sold millions of tickets worldwide, and is generally considered one of the best musicals out there. But since it’s enjoying a two-week run in Charleston, we felt it was our duty to make sure that it lives up to the hype. And it does. The dazzling sets, elaborate costumes, and incredible singing more than made up for the handful of bumps along the yellow brick road at Thursday night’s show.

A map of Oz stretches across the stage, lorded over by a massive mechanical dragon. The lights dim, and several demonic-looking monkeys dance across the stage, setting the magical mood. Then we jump into the story of Wicked, right at the end, with a mob of Ozians celebrating the death of the Wicked Witch of the West as Glinda the Good lords over them in a floating “bubble.”

When one of the villagers questions Glinda about her connection to the fallen witch, she takes them back in time to tell the true story of Elphaba, the not-so-wicked witch. Meeting as students at Shiz University, Glinda is beautiful, shallow, and popular, while Elphaba is ostracized because of her green skin. Their early relationship is summed up in the song “What is This Feeling?” in which they hilariously describe their loathing for one another. Glinda, played by Tiffany Haas, was a bit difficult to understand in the first few songs, while Elphaba, played by Anne Brummel, stayed right on target throughout the challenging show — especially when she really belted it out.

A love interest enters in the form of Fiyero, a seemingly lazy prince whom Glinda zeroes in on immediately. Although David Nathan Perlow played the handsome cad well, his song “Dancing Through Life” was one of the weaker performances of the night — he just didn’t seem to have the lungs that the others have.

One of the most popular songs from the show is, well, “Popular,” and Haas’ comedic timing really came out in the scene where Glinda and Elphaba solidify their friendship. It’s clear that the two actresses have a strong chemistry. This is also the point where Haas started to look like a dead ringer for Madonna, circa Evita. At least from Row T.

The story continues, getting more involved as Elphaba discovers a plot against the animals of Oz and goes to see the Wizard, bringing us to one of the most impressive parts of the show as the two witches go to the Emerald City during “One Short Day.” The bright green lights and costumes are truly dazzling as the wide-eyed witches explore the city. Act 1 wraps up with the show’s signature, intensely dramatic scene in which Elphaba hovers over the stage singing “Defying Gravity.” The lighting was perfect and Brummel hit every note, doing every Elphaba before her proud.

Act 2 speeds along as the action ramps up and secrets are revealed, along with some clever tie-ins with the original Wizard of Oz story. The Wizard, played by Paul Kreppel, has his moment in the spotlight during the light-hearted, ragtime-flavored “Wonderful,” and Elphaba and Fiyero bring the heat in the romantic “As Long As You’re Mine.” The highlight of Act 2 was Glinda and Elphaba’s duet “For Good,” although there were a few points when sound issues detracted from their singing. The show wraps up with a twist ending that left everyone smiling on Thursday night. Wicked continues through April 29, but considering the crowd at last night’s show, tickets are selling very well, so get yours now.