REVIEW: What If? lets the sunshine in with latest production of Hair

Featuring all your fave songs 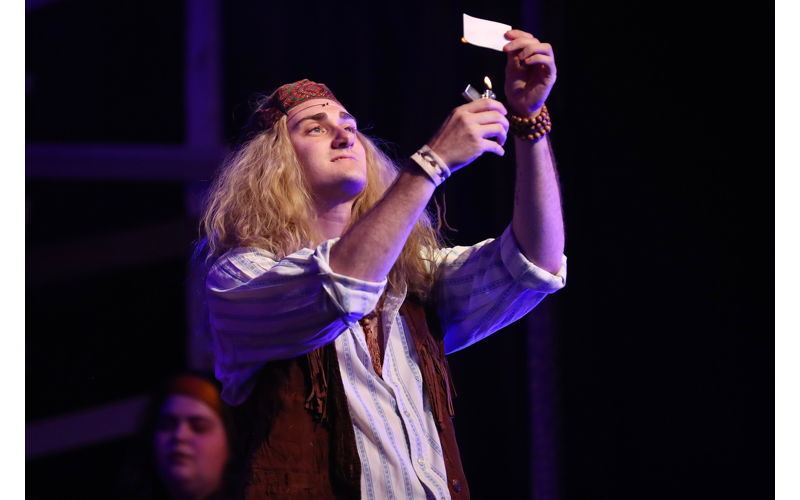 Since the rock musical Hair first let loose its hedonistic, draft-dodgy, follicle-focused glory on Broadway in 1968, the Great White Way has never been quite the same. After all, when writers Gerome Ragni and James Rado teamed with composer Galt MacDermot to create show tunes about sodomy and pushed through a racially integrated production on Broadway, a paradigm shift happens. Certainly it paved the way for shock hits like Avenue Q and The Book of Mormon that subverted the genre with raunch and irreverence, as well as Boho blockbusters like Rent that chucked razzle-dazzle for New York City grit.

Sampling Shakespeare and peppering Christian allusions throughout, Hair homes in on Manhattan’s East Village (and managed to do so in real time with its 1967 premiere at the Public Theater that then transferred to Broadway the following year). The work shares the convergent stories of a few hapless hippies who, in the words of the name-checked Timothy Leary, turn on, tune in, and drop out by espousing free love, celebrating mind-altering substances, and generally getting majorly down on The Man.

This plays out at the Queen Street Playhouse in What If? Productions’ new go at the famously unrepressed and irrepressible song and dance extravaganza. As directed by Kyle Barnette, performers in various states of dress endeavor to bump, grind, and belt out numbers that have gone on to prove phenomenal staying power, among them “Aquarius,” “Good Morning, Starshine,” and “Let the Sunshine In.” Among the energetic, all-in cast, vocal skills ranged from serviceable in some roles to standout in others. On the Friday performance I attended, when performers were hindered by problematic tech issues, enthusiasm never flagged.

Regarding the standouts, there is the epic, all-important opener “Aquarius,” rendered resonant by the contributions of Madelyn Knight backed up by the whole. There was a garrulous delivery of “Colored Spade” by the magnetic Javaron Conyers as Hud. There is also a lovely “Frank Mills” by Jenny Bettke as Crissy, seated on the stage lip, and a comic, oddball, show-stopping “My Conviction” by Brian Porter as Margaret Mead (Tourist Lady).

The full 20-plus cast super-charged through one number after the next, which, as smartly choreographed by Sarah Callahan Black, brought the work’s signature bawd and balls by way of ample dry humping and other cheeky bits. They did so on a spare set featuring angled planks of wood and boasting an upstage platform that offered dynamism for the big numbers (though seemed to be particularly out of amplification range). The platform also housed a fine four-piece band featuring Chase Burns on drums; Misha Pekar on keys; Dean Harris on guitar; and McCarthy Fitch on bass.

I did not fully succumb to the seductive, free love triangle at the heart of the show, which hinges upon the sexual antics and growing affection among an alpha hippie named Berger (Xan Rogers), his roommate Sheila (Rebecca Weatherby), and a would-be Mancunian called Claude (Michael Okas). It certainly wasn’t for lack of commitment on the part of the performers, but more a question of establishing character at the outset of the show, as well as sparking a chemistry among the three.

And I never quite felt Hair‘s juxtaposition of a scrappy, gruff New York dusted with flower power that so distinguished the Tribe, as the ensemble group is called, which was inspired by the real life East Village denizens promoting their unapologetically polyamorous and substance-strong “be-ins.” They are, after all, an altogether different stripe from those beating it to San Francisco for the Summer of Love, and Hair is a New York-specific proposition, with a text inflected with references from the IRT to Flushing.

But there was poignancy aplenty in Okas’ Claude as he grapples with his draft card conundrum. With all his posturing under that formidable blonde mane, he just can’t bring himself to burn the dreaded paper, even as deployment draws ever closer. And the amiable, spirited quirk of the ensemble, which was so marked in its daring and diversity when the show originally debuted, was wonderfully, joyously present — though not fully exposed as it has been in some subsequent productions, since no cast member ever went the full monty.

True, this Hair may not have had mine standing on end, but it gets extra points for heart. All in all, there is plenty of fun to be had in this exuberant, unfettered production, which aims to once again let the sunshine in.

Kyle Barnette of What If? Productions makes a lifelong dream come true