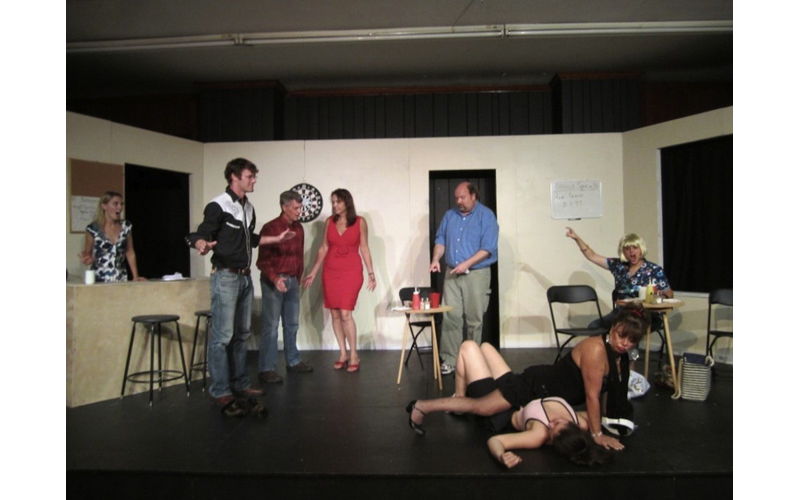 It's a Woman's World

Simply Divided takes place in the Simply Delicious Diner, a local hangout in the tiny town of Simply, Ala., where all the streets are named after great confederate generals. The diner is appropriately plain with one counter, two small tables and a menu of fried fare, collard greens, and cheese grits. The set design captures the rural Southern aesthetic with worn-out plaid table cloths, cat art, and an old radio which plays Hank Williams and Johnny Cash classics. The seemingly content Diner owner, Sissy Mae, (Melanie Cason) anxiously crowds around the radio each morning as the DJ announces Simply’s population stats, which are inevitably disappointing.

The male population of Simply has become virtually nonexistent since an abhorred Toyota plant (its very name incites dart throwing) in Mobile lured them away. The few remaining citizens are a group of increasingly desperate women and one OCD-riddled man who chew the fat at The Delicious Diner, and whose  dreams seem to have gotten lost decades ago somewhere between General Braxton Brags Boulevard and General Robert E. Lee Avenue.

Without men to satisfy their “needs,” the women have become an eccentric bunch.  D’Ellen (Jackie Helmer) is a hilarious, four-times-divorced cougar who lives off alimony checks, squeezes her body into tiny, age-inappropriate ensembles, and dramatically “smokes” unlit cigarettes (she quit lit cigarettes years ago).      In an ever-present mini tennis skirt and white sneakers, Trish Ann (Caroline Boegel) is a once-promising tennis star in who moved back to Simply after college to take care of her rich grandfather. Twelve years later she’s still waiting for him to kick the bucket so she can finally get her inheritance and pursue her dream of going pro. Behind her sweet, Southern smile is a competitor ready to play on the court and off. Charity (Andrea McGinn) is a gregarious beautician whose enthusiasm and belief that every problem can be solved with a new hairstyle are contagious. She treats the diner like her salon and thinks nothing of teasing  a wig to Tammy Wynette heights while sipping her morning coffee.

The plot is simple: Gabe (Boogie Dabney), a new man (read: fresh meat), moves to town  to teach English at the Simply High. Immediately — and without hardly knowing him — each of the man-deprived women, including Sissy Mae’s daughter, Sarah Beth (Clancy Bryant) who’s back from College, fall in love with Gabe. In their desperation, the women turn on each other and serious cat fighting ensues. Could the diner’s feline décor be symbolic?

The story is lighthearted and could have been told in less time, but while this play will not change your life, it will make you laugh. Lovett’s colorful characters are richly painted. A talented cast brings them to life and succeeds in making their foibles endearing. Falling somewhere between a Lifetime original movie and a particularly boisterous episode of The Real Housewives, Simply Divided is an entertaining theatrical romp that leaves audiences more than simply satisfied.