5th Wall Productions’ ‘Snowblind’ is worth the trek through Citadel Mall 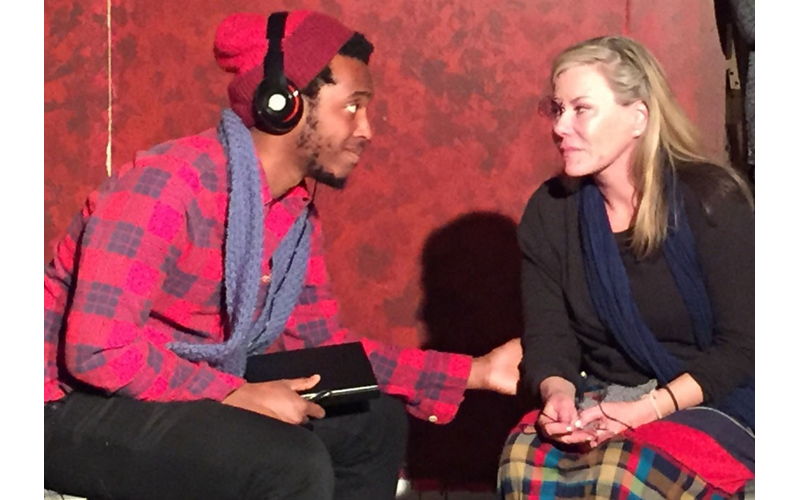 Prepare to exit your comfort zone. To get the most out of theater, particularly new work, you may want to brace yourself for a few discomfiting truths. And, on a more pragmatic note: The discomfort doesn’t just take place in the space between our ears. Risk-taking works of theater, emerging artists and bold new voices routinely find their first audiences in makeshift conditions, swapping out gilded proscenium arches and plush, numbered rows of seats for any available, affordable room that can hold some mismatched chairs.

The tradeoff, however, is worth a wobble or two. For the potential scrap and inconvenience, you not only get a first glance at fresh takes on both theater and contemporary life; you also experience that singular sensation of having been part of the artistic process from the get go.

To this day, one of my most profound theater memories is the unofficial 2005 Under the Radar Festival performance of Gatz, a verbatim, eight-hour-long interpretation of The Great Gatsby created by New York’s excellent, edgy Elevator Repair Service (ERS). Over two bone-chilling nights on metal chairs in Soho’s drafty Performing Garage, I took in the first go of this astounding show, which somehow managed to evoke full, fantastic Jazz Age splendor on a set comprised of drab metal file cabinets and related office drear.

When Gatz finally got the required rights from the Fitzgerald estate, it opened to great acclaim at The Public, and then played to capacity houses at prestigious theaters and festivals around the world. To this day, having voted with my snow boot-encumbered feet holds a more esteemed place in my mind’s eye than does my swell center spot at the show’s Public premiere a few seasons later.

On another similarly frigid day, I trudged out to the East Village to check out the Sunday performance of an off-Broadway show in its initial brief run at Classic Stage Company, attending solo because I could not lure any others from their cozy homes. I returned to mine ecstatic, having seen one of the first performances of Venus in Fur, the two-person piece by David Ives starring the phenomenal Nina Arianda. Her performance helped propel the show to Broadway, where she won a Tony Award for Best Actress in a Play. The payoff for my lone subway ride was two fold. I had not only born witness to a stunning, standout night of theater; I was also audience to the show’s emergence from whim and a prayer to the heights of the Great White Way.

So it was in this spirit that I made my way to Citadel Mall — on the eve before JC Penney announced its intention to close up shop there, thus marking another empty storefront in the once-slick shopping complex. Amidst a commercial corridor of cellphone kiosks, protein supplement stands, and shuttered retail stores, I attended the final dress rehearsal of 5th Wall’s workshop production of Snowblind.

Laura King’s new play, directed by 5th Wall co-founder Blair Cadden, involves its own boulevard of broken dreams in the form of the five addicts who find themselves snowed in at a Narcotics Anonymous meeting. A pill-popping No Exit, cut with a little Waiting for Godot, Snowblind assembles a cohort of characters in search of a lifeline, as they await the arrival of the group leader, who has been stalled by the storm. They are thus stuck in a room containing little more than coffee, donuts, inspirational posters and each other. The plot thickens — and sickens — with the arrival of a fifth member, a menacing “newbie” named Sam (Cameron White), who is there for the sole reason of getting a court-ordered form signed.

As the five of them alternately spar with and support one another, provoke and console, questions regarding God, faith, redemption, hope and strength percolate as persistently as the ever-simmering coffee urn. One by one, each person in the room comes center stage to relay the backstory of how he or she wound up in this sad, eternal semi-circle — a warped A Chorus Line of personal narratives harmonizing human frailty.

Juliet, who is played with palpable poignancy by Emily Kautzer, dances to distraction. A poet named Ratt (the charismatic DeShawn Mason) seeks solace in Miles Davis. Doc (David Moon), a trained physician, hews to reason in the face of adversity and temptation. Charlotte (the majestic Margaret Nyland) sits peaceably knitting while keeping a maternal, watchful eye on all. When Sam storms in, he disrupts their carefully constructed sanctum, goading, scoffing and denigrating, and thus tearing asunder the fragile fabric of sobriety that together they have so painstakingly fashioned.

Yes, it is well-trod territory, the inescapable trap of addiction and recovery, but worth revisiting still. In an era in which many among us get a discomfiting close-range view of substance abuse, Snowblind underscores how its hold transcends age, gender, class, and race. The characters are convincing, from the hotheaded Sam in the full tilt of denial to the tragedy-addled Charlotte who emerges as the work’s mournful gravitational center.

And, yes, it requires a schlep through an increasing dispiriting Citadel Mall. Once on the other side of 5th Wall’s blue storefront curtain, you might still endure the occasional intrusion of the laughter of mall rats or hear the passing whirr of the floor polisher. But this is the tradeoff worth considering if you identify yourself as a theater lover. There is a real intimacy that inhabits the stage, and the sparks of an authentic, heartfelt work shining new light on the age-old problem of addiction, as well as its flavors of the month, Oxy and heroin. Anyone close to this topic will find comfort in its universality, and can gain much from the hard truths that Charlotte so softly delivers.

For a very fair price of admission, you get a chance to walk the walk past the close out sales at the JC Penney and help keep the dramatic art form vital and germane by supporting its lifeblood, new work. And you get a first pass at it, while helping its creators discover what reverberates with audiences (there is already word on the street of 5th Wall presenting downtown during Piccolo). You get the prospect of being part of that crucial process for playwrights in search of space and spectators. And you may just be rewarded down the road with that glorious feeling of have been present for the first glimpse of resonant, relevant art in the making. [event-1]