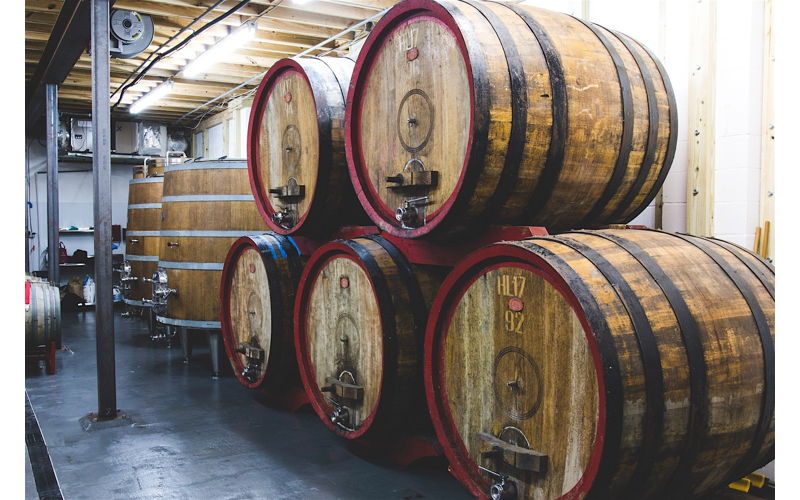 Last year some big news dropped on the craft beer community: Wicked Weed, Asheville, N.C.’s beloved craft brewery, sold out. Or, at least, that’s how a lot of people saw it. In May 2017, Wicked Weed was purchased by Anheuser Busch InBev, a company that House of Brews owner Rob Davis, when interviewed by CP at the time, said has been “trying to kill craft beer for years.”

No matter your feelings on the matter, it’s hard to ignore the Wicked Weed/InBev sale when talking about Revelry Brewing’s event, Funk Collective, held this Saturday and featuring beers from over 40 breweries. The Funk Collective was born out of the ashes of Wicked Weed’s sour beer fest, The Funk Invitational; after the InBev sale last year so many breweries pulled out of the Invitational that Wicked Weed was forced to cancel. That’s where Revelry and Greenville’s Birds Fly South stepped in. Last July, The Funk Collective was held in Greenville and this year it heads to Revelry.

“It was more of an opportunity to pick up something we all enjoyed and run with it and last year was a good kickoff because people had already made plans,” says Ryan Coker, Revelry’s head brewer, “When all of this transpired and when things got political and nasty — you can argue it ’til you’re dead — there were a lot of disappointed brewers that were looking forward to it, and Greenville being so close to Asheville, we said ‘Look, we’re friends with half if not more of these breweries, let’s reach out and say the party’s still on.'”

The Funk Collective, which will rotate between Birds Fly South and Revelry each year, is a festival dedicated solely to sour and wild ales. “We want your best sour beer — we’re trying to give some direction,” says Coker of the festival’s format. “We tried to more clearly define what this festival was. If you had a sour beer program and distributed in South Carolina, you likely got the invite.”

It’s no coincidence that Coker and crew are hosting this sours-only festival. Coker has wanted to focus on brewing sour and wild ales since Revelry opened. Now that his “baby” is all grown up, Coker is happy to announce that in an extraordinarily well-timed turn of events, Revelry’s second location, The Hold, opens on the weekend of July 6, one week after the Funk Collective.

“All of the products coming out of The Hold will have some barrel aged influence on them,” says Coker. “To further define that, while it will be a majority of ‘sour beers,’ there will be a further influence from barrels, a barrel aged inflection.” The Hold, located at 36 Romney St., just a block away from Revelry’s Conroy Street home, features a tasting room, an outdoor area, and as Coker currently sees it, the option to tour the space. “What we would like to see happen — and it depends how the market steers us — we’d like for this to be a catchall for when people come to the original brewery,” says Coker. “They find out about this place, they have a passion and desire for this type of beer, and they mosey on over.”

Coker says that all wort — unfermented beer — is still made at Revelry’s main location, and then transported to The Hold. From there, it’s “business as usual,” with the primary fermentation taking place in stainless steel fermenters. “It gets a little tricky from there,” says Coker, with the look of a kid in a candy shop. “After primary fermentation, [once the beer has] achieved whatever we want it to through the stainless fermantation, it moves over into the oak.” Coker sweeps his hands to indicate the foudres, large wooden vats that, in this case, previously held red wine. “There are two Italian, five French, and two American white oak foudres that were built for us. By virtue of their dimensions and the type of wood, they’ll all have intrinsic characteristics they’ll impart,” says Coker. Most of The Hold’s beers will have a production schedule of about a year.

If all of that sounds like a lot of beer talk — it’s because it is. Coker is not joking around when it comes to The Hold, which is pretty clear when you walk into the space’s coolship (or, properly, koelschip). “It’s a Belgian vessel for open fermentation,” says Coker. “To my knowledge we are the only brewery in South Carolina with a purposefully built coolship.” The room, lined with wood paneling to mirror the effects of a barrel, features two large-scale paintings by Revelry’s in-house artist, Chris Kemp. Gaea, Mother Earth, smiles out from one wall. Father Time gazes at her from across the room. “Without either of these in play, we have nothing,” says Coker.

Looking around The Hold, Coker assures me that the Romney Street spot was “born from a foundational love.” “I got into brewing beer and I was awakened more or less from the yellow fizz haze. When that occurred I kept being drawn to sour beers,” he says.

Coker’s love of beer goes beyond just taste and style — he nerds out over it, too. In case you didn’t know, Revelry has a fully functioning lab and full time lab manager. “It’s dedicated to quality control and propagation and cataloguing,” says Coker of the lab. “In fact we just had a vendor here for a PCR machine — polymerase chain reaction. Basically you’re taking a DNA splicer, a cross section of DNA, and determining what the organism is.”

And no, a full time lab in a small brewery is not something you’ll see often. “It’s the science mind in me,” says Coker. “And the fact that we’re prideful on giving you a product that should be consistent and shelf stable. That’s our due diligence.”

Proceeds from the Funk Collective benefit the Charleston Parks Conservancy and Wake Up Carolina. Learn more about both organizations online at revelrybrewingco.com. And snag tickets at citypapertickets.com.