Shine spotlights food from around the globe 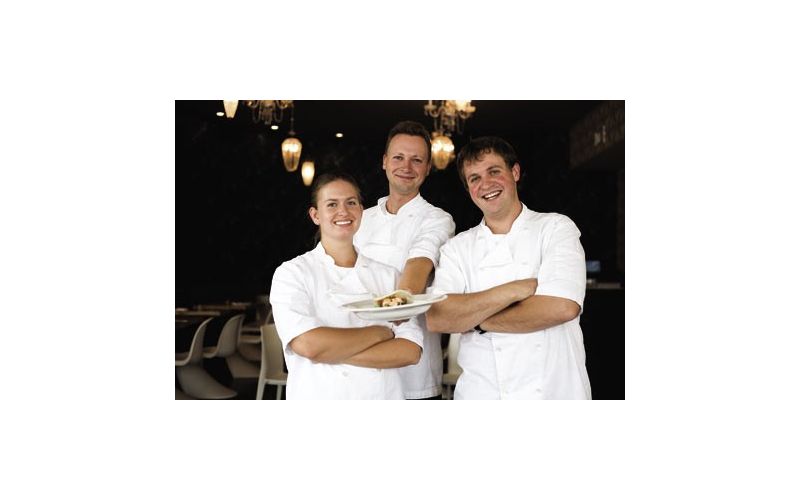 Charleston’s downtown dining and nightlife scene is inching steadily northward up King Street, and the appearance of Shine at the corner of King and Line creates a new high-water mark for ambitious dining on Upper King.

The restaurant’s name reflects both its luminous ambitions as well as the central motif of the décor: chandeliers and ceiling lamps, a dozen different styles of which hang down from every few square feet of ceiling. My favorite, a splendid white concoction that looks like a feathered headdress with a light bulb inside, floats above the big, arcing bar that dominates the dining area. The bar sweeps out into the middle of the room with stools on either side, providing a prime spot both to sample the fare and also watch the crowd as they come in and out.

Shine is as ambitious in its menu as it is in decor. The food is a complete mishmash of international styles. Countries and regions represented include Thailand (Thai-style burrito, $6 for chicken and $8 for shrimp), Korea (bulgogi barbecued beef skewers, $7), the Middle East (falafel, $8), and Venezuela (arepas, $7). And that’s just the appetizers, which are labeled “International Street Fare.” Throw in entrées like the chicken rigatoni pasta ($15) and the big Angus Burger on sourdough ($12), and you’ve got Europe and North America in the mix, too.

The drink menu offers nine different sakes, beers from esoteric locales like India and Guatemala, and if you count the two South African wines, you’ve got six continents represented, with only poor Australia getting the cold shoulder. (Perhaps a Vegemite sandwich special could be added to fill the gap?)

My first impulsive response to such a lineup was, “Jeez, these guys are all over the map (literally)!” Fusion cuisine is a tricky thing, tempting cooks to just throw a bunch of flavors together willy-nilly: take a chicken breast and toss in garlic, basil, and peanut sauce and — voila! — instant Thai chicken. Substitute chiles, cilantro, and lime and — blammo! — Mexican chicken!

Shine manages to avoid this trap by focusing on solid cooking that stands up fine on its own. Rather than trying to gussy up a tuna taco with basil and jicama, Shine opted for arepas ($7), a sincere version of a South American staple. Instead of a flour or corn tortilla, they are built on an unleavened cornmeal patty that is grilled into a half-inch thick disk, which is then sliced and filled. Shine offers two choices on the regular menu: pulled pork with sofrito and black bean, avocado, cheese, and cilantro. Both are so tasty that you’ll scarf one right down and discover yourself scraping up every last trace of the filling out of the bowl.

The Thai-style burrito is a little more predictable offering — a thin wrap with shrimp or chicken plus strips of carrot, cabbage, and broccoli, served with a ramekin of peanut chile sauce. It’s a passable appetizer, but nothing that makes one sit up and take notice.

The grilled corn ($4) is a completely different story. It’s a full ear grilled just lightly brown, cut in half, and slathered with queso fresco and a garlic aioli. It’s creamy, delicious, and impossible to eat without using your fingers and creating a big mess — a perfect little appetizer, if you’re not out trying to impress a date.

The corn goes nicely with the Shine Caipirinha ($7), one of the restaurant’s four signature cocktails and now one of my favorite new beverages. Keeping with Shine’s wide-ranging internationalism, the Caipirinha is the national drink of Brazil and is traditionally made with cachaça, a rum-like liquor made from fermented sugarcane, muddled with limes and sugar. Shine uses brown sugar and adds Clement Orange liqueur, and the resulting combination is a revelation.

The entrées include a “meat & two” option with four meats (duck breast, pulled BBQ chicken, chile-brined pork chop, and a bistro steak) and a half-dozen sides. Some of the permutations might be a little risky, but matching the duck breast ($20) with asparagus and mashed potatoes is a sure bet. The thick, creamy Yukon gold potatoes are delicious, and the asparagus is marinated and grilled just enough to give it good flavor without limping it up. The duck breast is served with a choice of a spicy Asian orange glaze or a honey tarragon reduction, but fortunately these come in a ramekin on the side, since the seared duck is flavorful enough on its own and doesn’t need a lot of help from spicy, sweet sauces.

As appealing as the “street fare” and entrées are, I really went to Shine with one overriding ambition: to try their chocolate-covered bacon sundae ($5). This is the kind of thing that a restaurant might put on its menu just to get attention, and the kind of thing a diner might order just for the sheer novelty and perversity of it. But, I can now attest, this is not just some sort of novelty item. It’s a remarkably good dessert.

The sundae is served in a deep, square dish. A hefty scoop of vanilla ice cream is topped with hot fudge and peanuts and, laid across the top of it all, there’s a wide strip of crispy bacon coated in chocolate. The bacon’s flavor and texture work perfectly in a sundae, especially if you chop the strip up into little bits and try to distribute it evenly with each bite. It’s crispy, salty, and smoky, a perfect complement to the smooth, sweet ice cream, the slightly-chewy fudge, and the crunchy peanuts. Bacon’s star is on the rise, and I predict you’ll see similar dessert concoctions sprouting up on menus across the city.

The bacon-covered chocolate sundae is, in fact, sort of a metaphor for Shine as a whole. The restaurant presents such a mélange of divergent styles and mixed motifs that it just shouldn’t work. The crowd is young and smartly-dressed. The music is strident Euro pop with a constant thudding beat. The décor is a busy blend of sleek lines and paisleys and complicated lighting, the wine glasses are stemless, and the four beers on tap are craft brands you’ve probably never heard of. And all of this is plopped down on a lonely corner of Upper King that’s still sketchy enough to justify the two huge guys in “security” T-shirts stationed in the parking lot after dark. With drinks and food items plucked from the four corners of the Earth, the menu should be a train wreck of mismatched tastes.

But, somehow, Shine manages to pull it off, and pull it off quite well. The contrasting elements of the atmosphere blend together to create a room that is comfortable and inviting. The drinks are intriguing enough to make one want to come back on a regular basis, and the food is really good, too. And, there’s plenty of free parking in a big gravel lot right next door — a rarity downtown.

Put it all together, and you have a flashy newcomer with all the ingredients to become a popular gathering spot, the kind of place where people drop in for drinks and a bite while gearing up for a night on the town. As of last Tuesday owner Dean Johnson also started serving lunch, with the same arepas from the dinner menu along with a few more sandwiches, salads, and curry dishes, too. I predict a bright future for Shine.