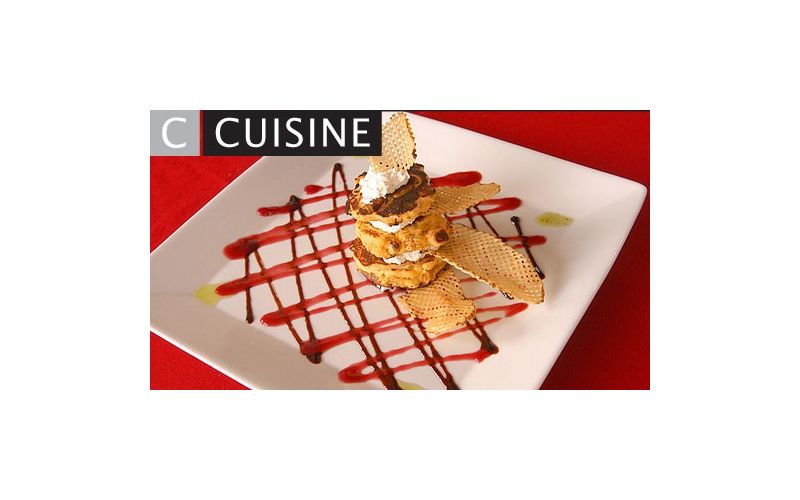 A trip down Paris’ Boulevard du Montparnasse presents a great introduction to the true restaurant. La Rotunde, La Cupole, Le Domê, La Closerie des Lilas shine in their Hemingway-esque glory, all quivering oysters and foie gras, champagne at dusk with a couple of snails to boot — but hang a left into the Latin Quarter and you see the real face of French dining, the venerable bistro. Clad in worn, crushed velvet banquettes, with subway tile and tin ceilings, these places beckon the weary gastronome with a simplicity of flavors — like walking into grandma’s house and finding the succulent smell of chicken and dumplings wafting out of the kitchen. They speak of home and the flavors of home.

The exported bistro concept often needlessly suffers, aimlessly battered like a spent mule in a gypsy circus. Many American bistros have come to represent strange mutations that savagely twist the concept within the anonymous facades of strip malls. It sometimes appears as if anyone can find a dank, cramped space, toss in a few fully saturated, textured wall paints, some swank music, a gaggle of horn-rimmed college waitresses with full length kitchen aprons, and voila! A bona fide bistro. Somewhere among all the faux French-ness, the food is invariably lost, left awash in the clink of faked absinthe. Such establishments risk a confused self-image, devoid of a defining identity, a raison d’être. Despite all of the cross-cultural metaphor, many American bistros fail to put together a cohesive message; they simply lack soul, and the soul of a bistro surrounds its food.

In this respect, Lulu’s Bistro shows great promise, but like many of its brethren, it presents a confused palate, marrying eccentric flavors in a style that it terms “American eclectic cuisine spiked with Southern influence,” a moniker difficult to decipher with respect to the menu. Perhaps this is indicative of its location, squashed alongside the strip mall culture of bric-a-brac antique stores, flower shops, hair salons, and coin-operated laundries that populate the east end of Maybank Highway. Not surprisingly, the best parts of Lulu’s experience express the bohemian spirit of the place, and Chef Jeremiah S. Jackson deserves props for his willingness to push the envelope. Wild combinations of flavor and texture flirt with the edge of reason in a way that stirs curiousity: how can one not order a “Char Grilled Lavender Meatloaf with Shallot Laced Smoked Gouda Hash & Grilled Asparagus” or a “Bacon Cheeseburger Omelet with Roasted Potatoes and Grilled Tomatoes?” Inquiring minds just have to know.

Clearly, Lulu’s does not represent a typical “French” bistro, real or otherwise; it strives to perfect a new paradigm — according to them, one spiked with eclectic Southern influence. While this is an exciting proposal, pulling it off requires a level of execution not yet clearly shown. Some dishes perform brilliantly while others fail wretchedly. Jackson’s team plates one of the most delicious dishes of mussels yet known to man, studded with beautifully braised (all in Blue Moon beer no less) tomatoes, a mound of steamed spinach laden with melted cheese, and two enormous, grilled toasts soaked with olive oil. The mollusks are perfectly cooked, plump, juicy, lolling around in their shells and screaming for a bit more garlicky beer broth to be lavished upon them before consumption — bistro fare at its best. You will want to drool over the “Pistachio Encrusted Breast of Duckling with a Seared Grit Cake, Garlic Sautéed Spinach with a Traditional White Butter Sauce and Raspberry Balsamic Reduction,” perhaps wishing that the meat were cooked more rare, as requested, but savoring the delicate interplay between brittle crust and rich fowl.

Conversely, other plates come to the table in less-than-perfect condition; signature dishes, which should invariably be lavished with disproportionate attention, arrive with fanfare but lack good flavor and execution. Perhaps one should avoid the “Crawfish Hoe Cake and Herbed Goat Cheese Napoleon with Pomegranate Sauce” which, enthusiastically recommended by an otherwise excellent server, emerges sporting a rather charred appearance. Further investigation reveals the surface of the crawfish cake to be more reminiscent of a blown tire at a NASCAR event than the delicious morsel previously described by the waiter. Profuse amounts of goat cheese cover any hint of crawfish flavor that might have been spared by careful dissection of the overly-crisp exterior. The “Brie Smothered Stone Bass atop Oven Roasted Potatoes and Honey Almond Hericot Vert [sic], Finished with a Chilled Blueberry Mint Coulis” sounds interesting but materializes as an overly heavy preparation, the fish unnecessarily weighted by the copious amount of melted brie and clashing against the tart acidity of the blueberry-mint coulis — acceptable, but hardly worth the steep $17 price tag. Might patrons also be put off by the misspelling of “Haricots Verts” on a “bistro” menu?

This propensity for hit or miss extends into the restaurant operations, the pleasant, prompt dinner service contrasting with the awfully heavy wine glasses that brandish a lipped rim large enough to equate each sip with a kiss from Mick Jagger — hardly the remedy for an aggressively priced wine list. With a dinner entrée averaging around $18, diners deserve, and will demand, more. Although Lulu’s shows amazing promise and potential, it must execute with focus and skill, finding that soul that invariably hides in the depths of Chef Jackson’s wicked creations — and it will, or the revolving door that is the Charleston restaurant scene will make room for yet another contender.

The Charleston Grill will open its doors for the first time since the start of the pandemic Thursday.