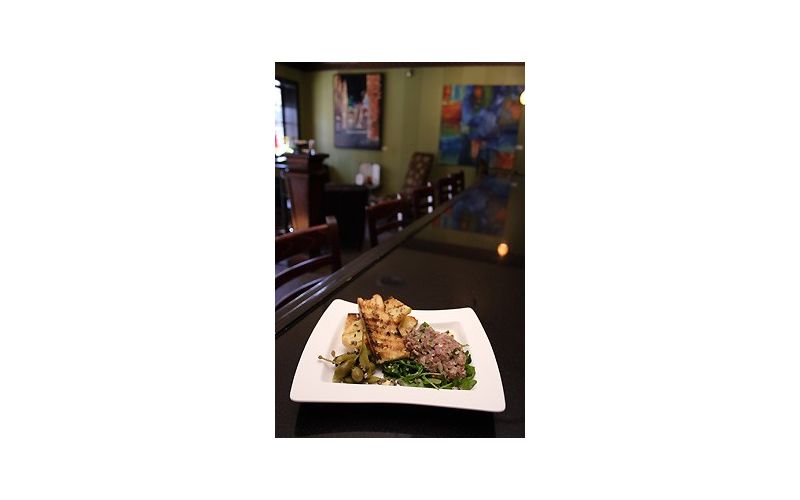 Restaurateurs on the Market constantly search for the next hot scheme, or tourist gimmick, that will boost business and give them an edge over the considerable competition in the area. Culinary themes seem magnified in this vicinity — from cartoon food like Bubba Gump’s shrimp extravaganza to the ultra-modern (and extraordinary) cuisine of Cordavi, the Market area ebbs and flows with the trends. Chefs play musical chairs, vying for top billing. As time rolls on, dollars continue to flow into the tourist machine, and the revolving door continues to churn — only the most capable are left standing.

This makes Cintra all the more perplexing to me — for the simple reason that I don’t really like eating there — never have. Yet it perseveres, excels, and obviously satisfies others. Large numbers of people claim devotion to its environs — including Chef John Zucker (Cru Café and Catering), who recently claimed it as his favorite place of the moment. What solution can this puzzlement provide? Am I missing something here? Why would I find Cintra so unsatisfying, when some of the top chefs in the city (those whose own places I particularly enjoy) sing its praises? I think the answer lies in style.

Chef Thomas Clayton’s food at Cintra certainly cannot be faulted; it speaks an excellent language with few missteps. The menu contains a perfect list of all the things I love to eat, an exciting ballet of flavors that complement each other with generous portions and skillful preparation. Decadent, earthy soups like the “Tuscan White Bean with Truffle Butter” ($6) and the “Deconstructed Rock Shrimp & Corn Chowder” ($8) showcase Clayton’s grasp of classical cuisine and its creative application (even if the corn chowder reveals an obnoxious tint of liquid smoke). They have delicious foie gras, duck confit, and mussels in several styles, all prepared perfectly — at a level of competence that even the most discerning diners should find compelling. But there is more to a restaurant than the food — they also contain a soul.

It is this part of the total equation that confounds me with Cintra. It opens the scene with a great bar — dark and devilish, some 45 custom martinis being mixed to order. Big, plush chairs and cool music bounce off the walls, but contrasted with the rear dining space, it is a false front. I think these guys need to fire their interior decorator (evidently a friend of the owner who came down from New York to do the place over). Perhaps I’m just a hapless, prosaic modernist, stuck in a land of pink foam stucco, fake columns, and preservationist nutjobs, but every day feels like Valentine’s Day at Cintra. The place is frilly, with little trinkets and pillows lying around and one of those wooden signs that reads “Relax.” Even after several martinis, the blaring red napkins do me in every time — I ain’t relaxed, people, I’m nervous. The long-stemmed red rose at each table last time I was there didn’t help much either — I thought I might be in a Stephen King time warp, trapped in a haunted Victorian bed and breakfast in the 1980s, or perhaps I was the central attraction at a Spanish bullfight. The crowd was a blur, the frenetic “open kitchen” clattered with the threatening clink of steel.

The beef tartare ($10) snapped me out my spell. It is my favorite in the entire city; because it is hand-chopped and perfectly chilled; because the mustard that clings to each tiny morsel comes tinged with truffles; because the arugula packs a perfect peppery bite and each blade seems to wrap itself around a small lump of the rich meat — all in perfect proportion. Your teeth and tongue swirl around the raw beef, the crunch of the greens, and the bite of good mustard — truffles well up from their forest floor and fill the nose with their thick aroma. Who needs the grilled focaccia that serves as toast points?

Cintra does. They’re supposed to be serving a self-described “Northern Italian fare with a twist,” but dishes like the tartare are more classically French with a chintzy Italian tie-in. In fact, a large part of the menu looks anything but Italian — fussy, with technique taking the front of the stage, not leading with fresh, seasonal ingredients. Much of the show seems to be left over from the days when Jacques Larson, who now resides at Mercato on the other end of the Market, manned the flames, but the spirit of Clayton’s food clearly transcends this narrow vision of what people are told to expect. It does so to the delight of his diner’s palates, but to the detriment of an overall cohesive experience.

That’s not to say that the Italian fare at Cintra lacks gumption or authenticity. Classics, like the “Shrimp and White Bean Bruschetta, Italian Sausage & Spicy Tomatoes” ($12) come true to form and the “Veal Cheek Ravioli, Wild Mushroom Jus, Shaved Pecorino Romano” ($22) must be applauded. Rich meat hangs between handmade pasta, the wild earth of the forest floor napping its exterior, spiked with the salty tang of aged cheese.

More sophisticated fare again gets mislabeled Italian. The stunning “Sautéed Halibut, Fork Mashed Peas, Lobster Sauce & Pea Shoots” ($28) looks like a dream. A perfect, plump morsel of flesh quivering in the center of an ethereal sauce, light and fleeting, topped with intertwining pea shoots — the deep richness of the fish framed perfectly between the sprightly freshness of shoots and concentrated reduction of a lobster base. I salivate while writing about it.

Three “Seared Scallops” ($26) dance around “Roasted Corn, Pearl Onions, Asparagus, and Carrot Butter” lending a dribble of juice from their caramelized faces to the medley of just crisp vegetables in the plate, the soft insides beyond the crust providing a lovely juxtaposition. Clayton can flat-out cook.

It is this outstanding grub, and a damn good bar, that has enticed me back for more. In fact, I can’t seem to get enough of the place lately. Like some aesthetic sadomasochist, I repeatedly want to venture back for another taste. I ignore the noise from an “open” kitchen that you can’t really see into, the art for sale on the walls, the unnerving color scheme, and general incohesive style of a place claiming to serve Italian food after naming itself for a Portuguese city. From now on I will grab a Negroni, relax without heeding the tacky sign, and, taking the advice of John Zucker, eat at the bar.