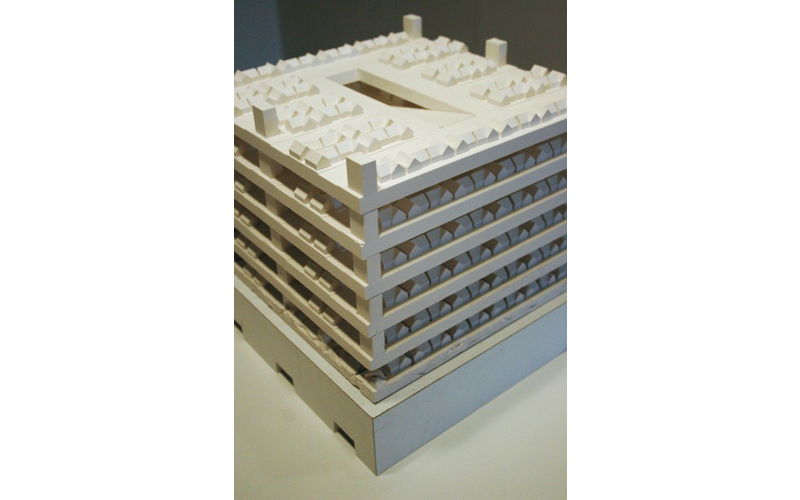 As Redux Contemporary Art Center settles into its newly renovated and expanded space, they present an exhibition that explores the significance of structure and the growth of suburban society in America. Social Velocity, featuring works by Ryan Mandell and Joseph Labate, looks at who we are and how we live.

Mandell, who teaches sculpture at Boise State University, creates streamlined versions of existing structures that have been reinterpreted to show their social influence. His initial interest in the subject began after reading works by German philosopher Martin Heidegger, who explored the nature of being. He was especially influenced by the theory of Dasein, which essentially suggests that a large part of the way we define ourselves is in relation to our context.

“‘Existence’ is such an expansive and vague term that it can be daunting to grapple with, while on the other hand, ‘location’ can potentially be specific and manageable,” Mandell says. “The idea that rigorous investigation of a place might lead to a larger understanding of the nature of being was, and continues to be, exciting.”

Mandell’s “New Density Model” series imagines a future in which we have run out of room to sprawl. “In these works I think about the way economic status might be revealed through the act of stacking, and how sunlight and structural integrity might be luxuries only afforded to the rich,” he says. His “Dream Home” series uses altered photography to comment on the homogeneity of the American Dream — a common theme in his work. After the housing market imploded, he began taking pictures of every home in a neighborhood, aligning them all around the same focal point, and then averaging all of them into a single image. He plans to make a Dream Home in every state that he lives in or visits extensively.

“On the one hand, this reliance on modularity and uniformity allows tremendous efficiency,” he says. “On the other hand, it has generated a landscape that is, at many times, depressing and banal. The viewer is free to draw their own conclusions about what the choice of efficiency over individuality indicates about our psyche.”

The work Mandell is presenting at Redux includes new paintings that consider how our understanding of landscape is mediated by the internet. One of the sculptures will look at the Pentagon as an architectural symbol of an ideology, while the other is a contemporary take on the legend of Noah’s Ark.

Joining Mandell for Social Velocity is Joseph Labate, who serves as chair of the photography program at the School of Art at the University of Arizona. Labate’s “View From A Mountain” series literally blurs the line between the natural and fabricated worlds, exploring how and where we live.

The series is taken from atop a mountain bordering downtown Tucson called A Mountain. “From the top of this mountain, I photograph what I see below using a telephoto lens on a digital camera,” he says. “Later, I load the photographs into a computer and, using Photoshop, selectively keep something in focus while blurring all else using the lens blur filter.” In one piece, an industrial-looking neighborhood is blurred while a Walmart truck is in sharp focus in the upper left corner. In another, a red truck is highlighted in the middle of a dusty field.

“The table-top genre, where artists build and create little worlds with toys and props to then photograph, has always been one that interests me,” he says, citing works by David Levinthal, Lori Nix, and Patrick Nagatani as inspiration. “‘View From A Mountain’ goes in the other direction. It’s photographing the ‘real’ world and making it look toy-like and artificial. It’s an investigation of what we think of as real and what we think of as ‘made up’ and technology’s role in that relationship.”

Although Labate and Mandell — who’ve never met — are strikingly different in their approach, Redux sensed they would be a good pair for the art center’s first exhibit post-renovation.

“Ryan Mandell and Joseph Labate were paired because their work appeared to conceptually overlap,” says Executive Director Karen Ann Myers. “Both artists address the idea of the contemporary landscape as subject. Suburban development, urban planning, and housing have always been charged issues, but now seem more timely and relevant.”