Redux gets a fresh injection from new director, studio space 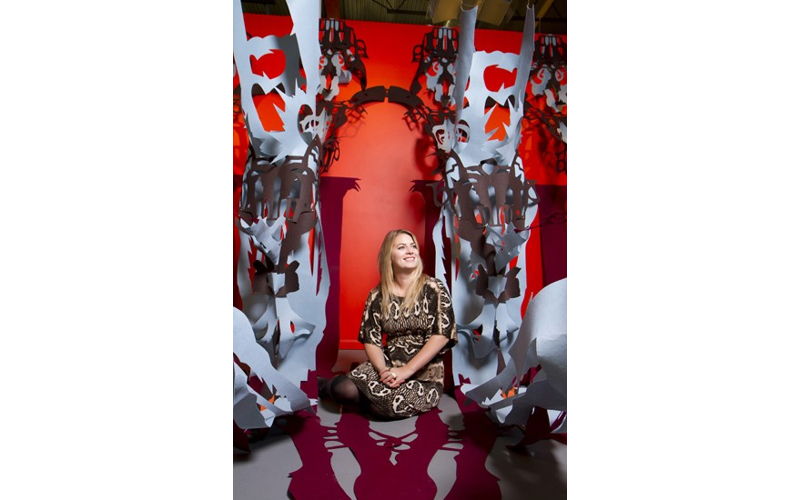 Redux is breathing. It’s not just the gallery installation by Liz Miller that greets you at the door, a delicate, yet somehow aggressive creation of felt, foam, and paper that resembles fire-breathing dragons. It’s more to do with the children running to their painting class, with the art that is everywhere, and the artists who are calmly going about their daily work of creation. Redux just might be the heart and heartbeat of Charleston’s living art scene, and you can feel it as soon as you step through the door.

This pulse is what has brought Janie Askew to Redux. The new executive director of the space, Askew had already proven her devotion to the organization this past summer before the director position had opened up by commuting here from Athens, Ga. — that’s four hours, each way — twice a week to teach a class. She was planning to move to Charleston, and Redux was firmly in the equation, although she wasn’t sure exactly what part it would play in her life at the time. When the executive director job opened up a month after she and her boyfriend made the move, she says, “Honestly, it felt like fate … I knew I’d somehow be coming to Redux, and when I saw the position, it was my perfect job.”

That is no small coincidence, since the directorship of a unique organization like Redux is not your typical executive director job. There’s the administrative element, of course, but there’s also the need for a strong background in education. And it helps greatly if you’re a practicing artist, which Askew is. Because of that, she says, “I understand artists’ needs. There’s the need for competition, but also community. A need for deadlines, but also inspiration.” Imagine your average admin-focused executive director saying something like that.

Janie Askew isn’t the only change at Redux. In July, the organization completed a massive expansion of their space, adding 15 studios. All are currently being rented. Most of these new studios are in the brand new building across the narrow parking lot from the original space. During our walk-through, we passed several studios that were empty of people, but filled with the evidence of their creative presence. There’s a striking painting of a man who bears a strong resemblance to Edgar Allan Poe. There are some in-process mixed media pieces hanging on someone’s wall. There are beautiful, intricate prints shuffled on top of a work surface. In a funny turn of events, former Executive Director Karen Ann Myers inhabits the studio that was to be Askew’s. Askew had already signed up for a space when she got the position, so Myers ended up using it instead. “We literally switched places,” Askew says, noting that Myers has been an invaluable resource to her as she learns the ropes of her new job.

Studio artists’ works will be displayed during the upcoming Open Studios event on Nov. 5, a day-long open house during which the artists’ studios are open to the public. Unlike an exhibit, there’s no theme and no specific planning on the part of the artists. “It’s the real experience, not fancied up … people get to see the underpinnings, and I think the public really loves that,” Askew says. Attendees will see the artist at work, which is a huge part of what gives Redux that living, breathing feel.

The Open Studios event takes the idea that art should be welcoming and accessible to the extreme: inviting the general public to actually enter into the creative process, engaging in a dialogue between viewer and artist that “rarely happens,” says painter and Redux studio artist Kate Long Stevenson. For Stevenson, the Open Studios are integral to her experience as a Redux artist. “It’s inspiring for me to see people getting excited about art, and I think it’s inspiring for the public to see people being artists,” she says.

The new building is also home to a spacious printshop, which holds special promise for Askew. She is deeply passionate about the organization’s mission and the many ways, from educational programming to public exhibitions, that it reaches out to the Charleston community. But she has her own long-term vision for what Redux can offer as well, and part of it resides in this space. “I could see us as part of a print revitalization,” she says. “I’m a printmaker, so I’d love to bring in some great artists in the field and get people excited about print.” Now that the new space has allowed Redux to practically double its class offerings, that is a very real possibility.

But for the time being, Askew is happily learning her way around her new leadership role and working to uphold Redux’s place as an outstanding arts nonprofit. “For now, what I want is for us to be functioning at our best capacity,” she says, “and to continue to be a place for cutting edge exhibits.”