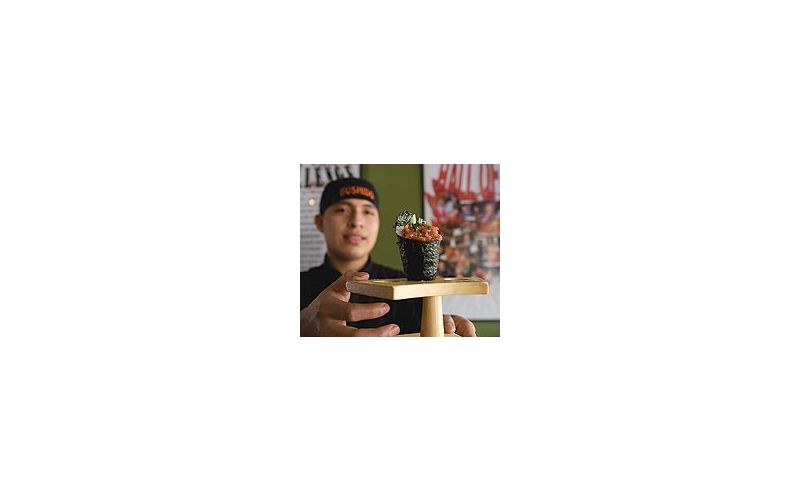 Fire in the Hole

The very name of the sushi joint out on Magwood Drive in West Ashley, Bushido, invokes the ancient Japanese code of the samurai. So when they taunt you with a graphic sign daring you to down 10 incendiary tuna hand rolls, any self-respecting Southern boy is bound by tradition and hormonal urges to oblige the challenge, protect the innocent, and find glory for his clan. Sort of like The Dukes of Hazzard with raw fish and sake. Besides, what better way to celebrate Columbia’s pronouncement of Ric Flair Day than this?

At Bushido, the chefs have rolled up 10 levels of fire. They arrive swaddled in black nori with guts of burning habañero, spiked with julienned cucumber and a touch of tuna — South of the Border-style sushi as only Bushido and its Latino chefs know how to produce. Inside, the fire rages, the sweat beads propagate, and the masses descend for the Spicy Tuna Roll Challenge. Owner Gabriel Balagtas says more than 150 people have eagerly embraced the challenge.

The reward for eating all 10? Twenty-five bucks in credit, a “sushi headband,” and most importantly, your name and picture emblazoned in the acrylic poster case that greets you as you enter the front door. There you will be, glorified forever (or at least as long as Bushido remains open) alongside a couple dozen of your mostly male compadres, for all to see — alongside my friend Ed Carson, who despite being the head soccer coach at Summerville High School (real men play football up there), has already somehow downed the full gamut.

This is no small feat. My own experience with the rolls confirms their voracity, but Ed’s done them all — from the wimpy first roll to the mind-bending 10th.

“Every level was a little different,” he says. “After level five or six, the pain was very intense for about six minutes. At level eight and up, the pain was intense for over 10 minutes and I had trouble hearing and my eyes watered. There isn’t really a hot sauce out there to compare it to. It was different.”

The rolls are big; tame they are not. Like the late, great Latasha’s Taste of New Orleans, where the chef would come personally to your table to convince you that ordering the jambalaya “extra spicy” was not in your best bodily interest, people flock from afar to test the spicy tuna at Bushido. On a typical night you’ll find someone like Ed furiously sweating through another level, eyes glazed and nostrils flared in testament to the spirits of Dixie machismo — a ritual affirmation of the pain, the dedication, and (more often than not) the manhood that it takes to down such an offending edifice.

Ask him how he did it without ever playing football, and he relishes the victory.

“I’m a real man because I faced my fear of level 10 and conquered it,” he crows. “Bravery is not the absence of fear, but the act of defeating fear. Therefore, I’m a real man, even though I cried like a baby.”

Thankfully for a relative lightweight like myself, they let you eat the things in more than one sitting. I’ve been camping out over there for two weeks, slowly working my way through hand-roll hell, and I have a few tips for those participants who want to take on the fiery challenge themselves.

First, don’t drink any water. I picked this up from my (now) favorite waitress, without whose coaching and deft hand, I wouldn’t have made it. Second, try not to chew. This also spreads out the fire, from lips to throat — pinch the nori and swallow the bites whole instead. Ask for some “white sauce,” the kind you get at the hibachi places about town, and douse the mouth between bites. Chew a couple of Tums when you get home and don’t get caught more than five minutes away from a bathroom the following day — altogether a prescription for success, if I do say so myself.

With a little practice, you’ll be up there with Ed and me. I’m currently on level seven, and even though he’s done, I have a sneaking suspicion that the chefs let him off easy since he’s a Spanish teacher. I’ll be back for more, all 10, with my trusty waitress and Bushido spirit driving me forward every excruciating inch of the way. Hopefully these things aren’t lethal, but Ed had some ominous words about the intensity of level 10: “It felt like a bomb went off in my head. I don’t want to feel that ever again.”

So it’s probably not for the sane, but anyone with a propensity toward testosterone-fueled culinaria and preposterous dares involving taboo foods, hot sauce, five-pound hamburgers, or beer funnels, should make Bushido a regular stop.