Rapper Mike L!VE debuts in Charleston with an album release 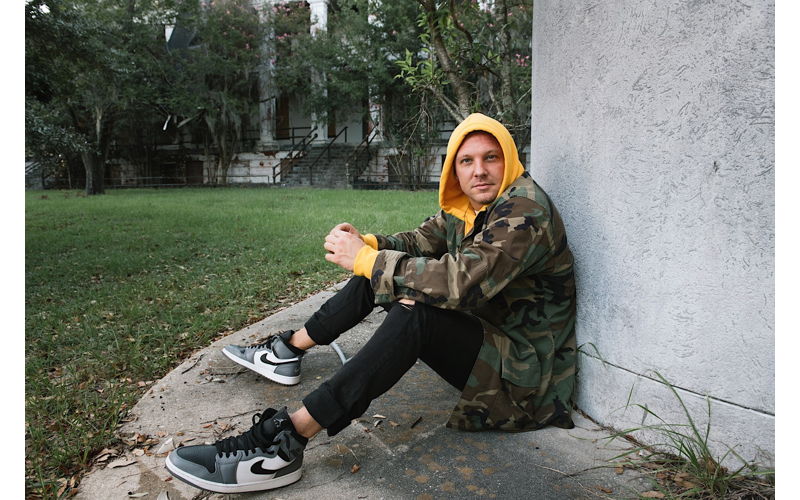 The new album from the Charleston-by-way-of-Asheville rapper Mike L!ve is called Examples of to Inspire You. The blank space isn’t a deleted expletive; it’s a deliberate empty space.

“It’s unique, right,” L!ve says with a laugh. “Nobody puts out an album with a blank in the title, right? I was looking at all of these possible album titles, where they would leave things blank and you were supposed to fill them in. I was like, ‘No, that’s actually the title.'”

But the title is also meant to be filled in by the listener. L!ve felt so inspired during the recording of his debut full-length album that he wanted people to think of the things that inspired them while listening to it. “I knew that I was really inspired on this project, and I wanted to inspire others,” he says.

Whatever one thinks of the title of the album, though, it’s hard to deny that L!ve, formerly of the Asheville hip-hop group Free the Optimus, is feeling the flow on these seven tracks. Working with crisp, skeletal electronic beats, L!ve has crafted a head-nodding, hard-hitting collection of melodic rap tunes. On the album’s second track, the bouncing mid-tempo “Another Level (featuring SK The Novelist),” he handles both double-time verse rhymes and a laid-back, spacey chorus with ease.

“Who you fuckin’ with?” he asks his potential rivals on the song, “Your arms too short to box with God … I think I’m on another level.”

Later, on a track called “ATM (featuring Hunter),” L!ve oozes good-natured confidence, bragging about “makin’ music, you can get down to it/ Shit, I’ll buy ya’ll some drinks when I get around to it.”

As an MC and lyricist, L!ve is in fighting form on the album, shadowboxing with the beat and laying down rhymes at breakneck speed. He sounds like a performer who’s eaten, breathed, and slept hip-hop for most of his life, but that’s actually not the case. Back when he was growing up in Forest City, N.C., L!ve was a metalhead.

“My first love was metal,” he says. “I was a metal drummer to begin with. But I had this friend who was in love with Wu-Tang Clan, and he’s the one who turned me onto an artist named Ghostface Killah. After that I got into A Tribe Called Quest and Common.”

The young L!ve found himself falling in love with the complex, fully-formed verses of these high-quality MC’s while rap music itself was trending in another direction.

“When I was 16, Eminem had made freestyling a trend,” he says. “No one was actually a rapper; everybody was freestyling. But as I listened to Wu-Tang, I realized that these guys were really smart; they were thinking about writing lyrics. So I started writing, then I started performing, and by the time I was 19 I’d moved to Raleigh and I started performing with a band. I started to really grow and create as an artist.”

Eventually, L!ve grew tired of the limited Raleigh hip-hop scene and moved to Asheville, where he hooked up with Free the Optimus.

“I would show up and they’d have these open-mic hypers onstage before their show even started,” he says. “So I wasn’t even on the bill, but I was able to shine a little bit for the people. I’d get to do maybe two or three raps before they started the show. I was edging my way into the scene however I could. After these shows, people would gather on the sidewalk and start beatboxing and rapping, and here was another opportunity for me to mingle with the artists in the community and get my two cents in.”

Free the Optimus was impressed enough that he was able to join the group, and during the next couple of years, L!ve and the group opened shows for Ghostface Killah, Lupe Fiasco, Big Boi, and Raekwon.

“I went from being a nobody to having a chance to open for my heroes, you know?” he says.

L!ve credits being a serious student of the rhyme as the reason he was able to become accepted in Raleigh and Asheville’s hip-hop communities.

“Being a white guy in hip-hop, you want to come really lyrical,” he says. “Some people try to pull it off by wearing the gold chains or the gold teeth, and I’m not really that kind of white person. I try to do it in a more skillful way. If I was a grocery store, lyrically, I want to make sure my shelves are stocked. I want to challenge myself creatively, and try to do it in a way that doesn’t sound fake or phony.”

L!ve’s recent move to Charleston (which he jokingly says was “to be close to the beach”) has, in a sense, put him back at the bottom of the musical pecking order, something he sees both as a disappointment and a challenge.

“I opened for all of these legends and played for thousands of people, and none of it transfers,” he says. “None of it carries over. It’s frustrating considering what dues I thought I’d paid, but it kind of lights a fire underneath me, and makes me want to go out there and show people that I’m a professional.”