Quyen is the mullet of Charleston’s restaurant world 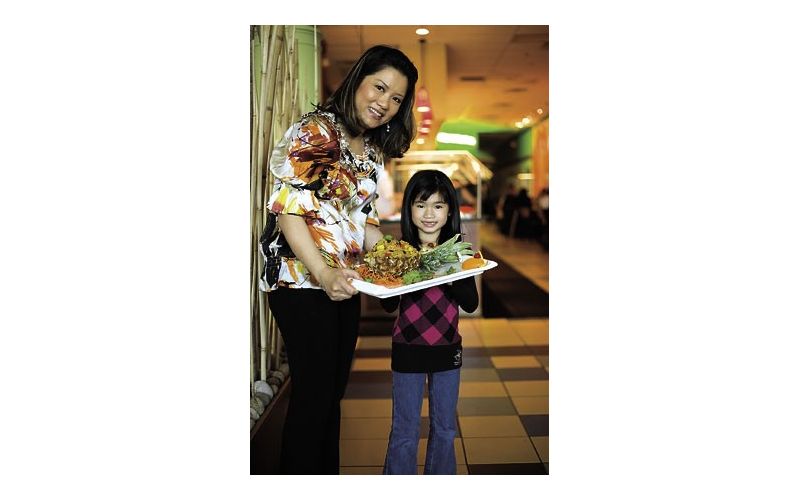 Business in Front, Party in the Back

Party Kingdom is an enterprise that has raised the eyebrows of James Islanders for well over a year because of its odd combination of indoor kids fun park — complete with skeeball, air hockey, and a climbing gym — that just happens to serve some bang-up Vietnamese food. Think Chuck-E-Cheese with tasty spring rolls and pho instead of mediocre pizza.

The prospect of chopsticking down a bowl of noodles amid clacking skeeballs and squealing, candy-mad children could have been off-putting to many, but earlier this year the business underwent a transformation into Quyen Asian and Sushi Bistro. The dining and game areas have been separated, and the front portion has been given a serious upgrade and is now more of a pan-Asian bistro that just happens to have a kids play-place tucked away in the back room.

Once a big fluorescent-lit room with bright pastel walls and plastic booths, the front now has an elaborate bamboo-lined entryway, full-service seating, and big four-foot-square photographs of children from across the world. It’s sort of a mullet restaurant: like the infamous haircut, business — serious food business — in the front and party in the back.

The menu has been given a serious upgrade, too. The entrées now span east and southeast Asia, with an array of dishes from owner Quyen Tiet’s native Vietnam along with selections from Japan (including a full sushi menu), the Philippines (pancit), Thailand (pad Thai), and China (spring rolls and fried rice). House specialties include everything from a whole fried flounder ($16) to a Vietnamese half-moon crepe stuffed with bean sprouts, chicken, and shrimp ($9) and served with house-made fish sauce.

Quyen seems determined to be unique in everything that it does, and its buffet ($12 at lunch) is no exception. The buffet is a long L-shaped counter, the first two sections of which contain a wide selection of sushi, an item that rarely appears on lunch buffets in this town. The first section has a fairly standard line up of nigiri like salmon, mackerel, and tuna; the next offers the flashier rolls — everything from the requisite California and Rainbow rolls to complex concoctions with tempura, tuna, and crab.

The buffet is definitely a step ahead of the discount all-you-can-eat gut-buster places. There is a little of the fried stuff — like crab and cream cheese-filled wontons — but just a little. One section is dedicated to cold vegetable and noodle salads, two big pots of soup anchor the middle, and a long line of shrimp, chicken, and beef dishes finish up the buffet. The presentation is beautiful, with each of the sushi rolls and entrées arranged so artfully that one is almost loath to take a portion from a newly laid-out dish and break the symmetry of the display.

Even with the delicate presentation, it’s still a buffet, and much of the selection — like Mongolian beef, fried rice, and a lot of chicken and shrimp dishes — are just standard meat-sauce-and-rice Chinese-Asian fare. But plenty of items stand out. The steamed, chicken-filled dumplings have a mysterious sweetness that will send you right back to the bamboo basket to try a couple more. Chopped pork and shrimp are melded into a big egg-like orb and wrapped around a steamed asparagus spear. The red curry shrimp has a magical blend of coconut milk and spices that starts creamy and sweet and then sneaks up on you with a subtle heat.

The buffet is definitely the best way to sample the broad range of Quyen’s dishes, but in this kingdom the pho still sits atop the throne. The menu lists beef, chicken, and shrimp (at $8.50 a bowl for beef and chicken, $9.50 for shrimp), and word has it that you can order it “Vietnamese style,” too, with tripe and beef tendon included.

The regular beef version is a big white bowl of succulent beef broth with long rice noodles and a few sliced halves of very dense, savory meatballs floating inside. The broth is steaming hot and accompanied by a big plate of thinly sliced rare beef and tender brisket with onions, bean sprouts, Thai basil leaves, lime wedges, and sliced jalapeños. You add these into the bowl as you go, tearing the basil leaves to unleash the fragrant oils and heating the beef in the steamy liquid.

The broth itself is almost indescribably complex, with a deep richness unleashed from simmered beef bones along with a mysterious blend of sweet and savory spices — cinnamon, star anise, ginger, perhaps? Against this flavorful backdrop, the thin silky slices of beef seem extravagant and luxurious. The bright notes of the minty Thai basil and the lime juice elevate a bowl of beef broth into something ethereal that combines all the basic tastes — saltiness, sweetness, sourness, savoriness, and even a little bitterness — in a single dish.

As pho goes, Quyen’s is certainly as good as any I’ve had. Charleston’s dining scene is getting quite expansive in terms of its international options, but this one-pot delicacy is still a rarity on local menus and by itself is reason enough to give Quyen a try.

I will admit one thing: Quyen is not the best place to go if you’re in a rush. We found the service, while plenty friendly enough, to be spotty and definitely unhurried. But, with the massive play area and teddy bear room beckoning from the back, it’s a perfect place to take the kids on a rainy afternoon. If you’re worried about the tots’ conservative palates, there is a full selection of American-style kids dishes like pizza and popcorn chicken that go perfectly well with the skeeball and whack-a-moose games. There’s also a $7 children’s buffet option that’s a great opportunity for a youngster to try something new and adventurous, too.

Arcade games, candy counters, rich hearty pho, and plenty of Asian beers in the cooler: that’s a party kingdom for both the old and the young.