What would Blackbeard eat? 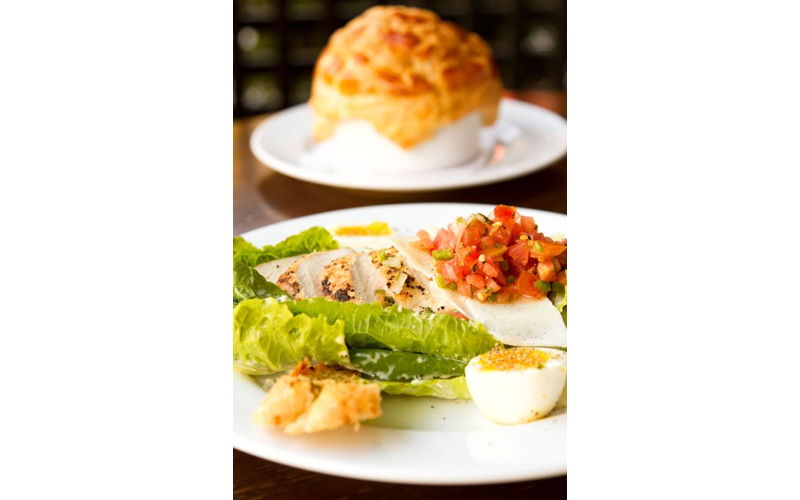 If you haven’t been to Queen Anne’s Revenge recently you’ve missed some significant changes. Yes, it’s still a pirate-themed restaurant named after one of Blackbeard’s ships, and the dining area remain largely unchanged with rough-hewn tables hanging by chains from the ceiling and swords and other pirate relics lining the entryway. The bar area, however, has been totally revamped, a new large outdoor deck added, and, most importantly, the menu has been significantly overhauled.

It was time for a change. The original lengthy slate of steaks, chicken, fish, and mix-and-match fried seafood platters was an Anywhere U.S.A. compilation that, apart from the requisite bowl of she-crab soup, had nothing particularly Lowcountry about it. Since Queen Anne’s opened in 2001, the Charleston dining scene has evolved considerably, and the Neighborhood Restaurant Group has opened new restaurants, including the acclaimed McCrady’s, which debuted Chef Sean Brock in 2006, and Husk, which opened last year and earned immediate raves in the national press. All this time, Queen Anne’s Revenge sailed steadily along, and its menu began to seem almost as much a museum piece as the pirate muskets in the display cases.

On the new menu, the surf-and-turf selection has been pared back to just a few steaks and a catch of the day, and the old pirate-themed entrées — like “Calico Jack’s barbecue ribs” and “Captain Moody’s chicken” — have walked the plank. Bistro-style entrées like pan-seared salmon ($17) and grilled beef tips au poivre ($17) have moved into the foreground, and farm-to-table ingredients like Geechie Boy grits, Carolina Gold Rice, Benton’s country ham, and Surry County sausage now appear prominently.

There’s something almost poignant about it, like a jealous older sister whose younger siblings have gone on to become celebrities. One can almost hear Queen Anne saying, “I can cook fresh local peas and serve Benton’s ham, too.”

The “Rockefeller-style” baked oysters ($9) are an unusual take on the old classic: served on a long glass tray atop a bed of rock salt, the Gulf oysters are huge and topped with spinach and a creamy fontina sauce rather than the traditional hollandaise. It’s sort of an odd preparation, but it works. A new relish plate ($9) delivers three cups of spreads: a pungently spiced deviled-egg spread, a dense orange pimento cheese, and a really delicious creamy, smoky trout dip, though the accompanying “homemade wheat thins” don’t quite seem worth the fuss.

The Lowcountry nachos ($8) are a testament to the power of our local red peas. Call them crowders or cowpeas or what have you, but all Charleston restaurants should banish black beans and replace them with sea island peas instead. They’re still just nachos (topped with little bits of pulled chicken and lots of tomatoes and melted cheese), but they’re better because of the red pea salsa.

There are some nice accents on the salad selections, like the Benton’s bacon on the iceberg wedge ($7). The beef tenderloin salad ($13) tops standard mixed lettuce and tomatoes with roasted mushrooms and onions slightly charred from the grill and, as a tasty kicker, a “crispy egg” that will leave you wondering how one batters and deep fries an egg (we asked: you soft-boil it first before breading and flash frying.)

There are some noteworthy high points to the new entrée selection, too. The seafood purloo ($17) is truly delicious: local shrimp, fish, and mussels in a rich, slightly spicy orange broth. It’s served with savory Carolina Gold Rice that has a pleasingly firm texture and a nice zip of black pepper. The mussels are fat and perfect, and the garnish — a spear of okra split lengthwise — is a nice local touch, too. But it’s really that savory orange sauce that makes the dish noteworthy.

Just as sauce can make a dish, it can doom it, too. On the pecan peach chicken entrée ($14), the chicken breast itself is quite good — tender and juicy inside its crispy pecan crust — but the peach jus on top and the creamed corn underneath make it all too sweet and dessert-like.

And that’s sort of the theme to the new menu: a lot of good starts that don’t quite finish up right. Queen Anne’s shrimp and grits ($17) have gotten an upgrade, with the old andouille sausage — that spicy New Orleans interloper — banished in favor of Surry County sausage. The shrimp are the smaller, sweet variety more akin to the creek shrimp old Charlestonians would have used than the big ocean jumbo kind more typically employed these days. Unfortunately, the grits are soft and mushy — almost like scrambled eggs — and the shrimp are swimming in a thick sauce with big chunks of tomato and onion that overwhelm them.

The Mixed Seafood entrée ($19) combines broiled local fish, shrimp, and scallops with green beans, Carolina Gold rice, and a ramekin of béarnaise sauce. The shrimp are good and flavorful, the scallops a little too done, and the fish rather dull and plain. The real puzzler is the béarnaise, a rich tarragon-laden sauce traditionally served with steaks, not seafood. You might call it daring, you might just call it wrong. I lean toward wrong.

With some of Queen Anne’s new dishes, you can almost feel the strain to get from line-cooking to high cuisine. The roasted heritage pork loin ($17) is tender and flavorful, and the accompanying “goat cheese smashed potatoes” are rich and creamy, while the red peas and chow-chow are splendid local touches. But there are too-big chunks of potatoes in the smashed potatoes, and instead of a basic pork reduction, it’s served in a brown sauce that is a little too sweet and spiked with something extraneous (to my tastebuds it seemed like soy or teriyaki sauce), making the dish stumble just short of the finish line.

Queen Anne’s is a more casual restaurant than its fine-dining siblings, but it could still take some cues from them on the service front. At Husk or McCrady’s the servers never appear at your table reeking of cigarette smoke, and food runners do not sling your entrées onto the corner of your table with no attempt to clear away the appetizer plates and then dash off as if they had a fire to put out.

The real disappointment is that I see such potential in Queen Anne’s Revenge and really wish it would finish the job and transform itself into the restaurant that it ought to be: a truly unique local spot that one could find only in Charleston.

The pirate relics may seem a little corny at first, but when you pause to read the placards, you realize that it’s all authentic stuff, and much of it has a direct relation to Lowcountry history. They represent a fascinating time when a colony was being carved out of the swamps, and real pirates regularly sailed into the harbor and terrorized the town.

What better way to complement the decor than with cuisine that is truly representative of our region’s history, too? Shrimp and grits and she-crab soup, yes, but Sea Island red peas and purloo, too! The addition of the Painkiller — a classic cocktail made with Pusser’s Navy rum — is encouraging as well, since all right-thinking people recognize rum as the true signature liquor of the Lowcountry.

I made three visits recently with the sincere hope that I could declare “if you haven’t been to Queen Anne’s Revenge in a while, you owe it to yourself to give it another try.” I can’t declare that quite yet. While using good ingredients from local purveyors and looking back to authentic recipes is a good start, the rest depends upon execution. The changes to the menu are an encouraging step in the right direction, easing the restaurant away from Anywhere U.S.A. and toward distinctive Lowcountry cuisine. It just hasn’t quite gone far enough.

I, for one, will continue to check in periodically, if for nothing else than to have a plate of purloo for lunch or a Sunday brunch Painkiller and see what other improvements the future might hold.