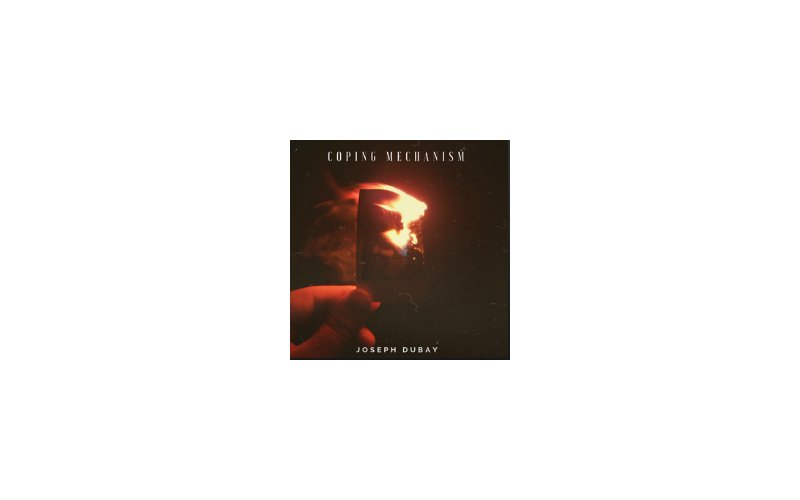 Local youth minister Joseph Dubay has cleaned up his slacker musician habits — you know, he printed business cards and graduated from Soundcloud to paying music distributor fees. After making a sharp departure from straightforward acoustic folk to lo-fi bedroom pop, released his first EP Coping Mechanism on Sat. March 30 (his 25th birthday). Check out our recent Q&A to figure out what got into him.

1. So you departed totally from folk?

I pick up an acoustic guitar and immediately think, “I’ll write about death.” But there are other ways. I had a couple of songs that were alt-rock. And I was leaning into some more synth stuff. I was getting into Joji, Clairo, and Gus Dapperton. I was nervous because I figured my friends would think it doesn’t sound like me, because I play guitar and I’m sad. Well, I can be sad with any instrument. But “Numb,” the first track on the EP, is a dance track. It’s a song I made to dance to despite the lyrics being about wanting to feel nothing. The second track “Stuck” is a ballad, a classic break up song. The third track “4EVR” leans more to the grungy side of bedroom pop, which is super chorused-out guitar and 15-year-old angst. And then the last track “Find” is two different styles in one song. It doesn’t have a chorus, but it’s a complete thing. I am really happy about how it all flowed together, and that I was able to draw from all the things that I really love about the genre.

2. What’s behind the name of your new EP, Coping Mechanism?

It’s from the first track “Numb,’ which is a dance anthem of hating emotions in general. It starts off with, “Be sad and dance.” That came from my response to someone asking me what I was going to do that night. Then I followed up that lyric with, “It’s a coping mechanism.” I’ve been working for about six months on this EP, and for three of those months, it was a completely different EP. It was folk music. Then I went through a hard breakup with a long-term girlfriend. And I shifted and put it all away. Last November, I thought I would record a few songs that have nothing in common, and release them on my birthday on March 30. I wanted to hit all the styles I had heard in bedroom pop in these four songs. Coping Mechanism, this EP, was me processing. It was my coping mechanism. And that’s what art is. It’s how we deal with what we’re dealing with. It’s been a healing experience. I’ll be the first to admit there’s a couple tracks that are pretty Taylor Swift-y in how “break-up-music” they are.

I’ve been listening to a lot of Nickel Creek. And Sleeping at Last, who inspires me because he puts out whatever he wants whether it be covers or originals. I ended up putting out a cover of “When The Party’s Over” by Billie Eilish just because I wanted to. There’s a YouTube channel called Sugar Pine 7. They started making music as a joke, and now they just make good music. Their last three songs have been outstanding. I covered one of their songs and tweeted it at them. They said, “How did you do that live? We have no idea, and we have a show in a month.” Then I told them what I bought to modulate my voice live. It was awesome.

4. Any live shows coming up?

I’m playing the second annual People Against Rape Performing Arts Gala on April 18. That will be my first show of the year, and I am really excited about it.

5. Tell me where you started with music in Charleston…

My first paid gig was opening for Heyrocco. Then in 2013, I settled into this weird underground thing downtown. There used to be this place called King Dusko, which was the hub of strangeness. That became my home for a while. I was doing folk music and helping other people write. Just making a lot of connections. Then I just stopped one day in 2016. I was happy with the little victories. But then really upset with not getting anywhere, but it was my fault. I was having fun, but I wasn’t caring enough.

6. What happened to get you back into making music for yourself?

I was starting to write more. Somebody paid me a compliment saying that my song “Stagger” was the best thing I’ve done. And I was flattered, but I also don’t want to live in the shadow of something even if I’m proud of it. I was talking with local comedian Joseph Coker. He asked me, “Why don’t you try harder?” I buckled down and cleaned up my social media, and put up songs by the beginning of 2018. I was tired of not making stuff. I needed an outlet. But I knew I needed to be professional and accountable — planning social media posts and doing the 60-second covers. My song “Therapy Session 3” was the first one I did with a little drum machine and my ukulele. I had challenged myself to write, record, and release a song in 24 hours. And even though the mastering sucks in a lot of my earlier songs like that one, I don’t care if imperfections are visible. Which is one reason why I am drawn to bedroom pop. It sounds like you know what you’re doing but you don’t know what you’re doing.

7. What would your advice be to someone struggling with the drive to make music?

Don’t force it. We get hyper focused on the fact that we aren’t doing anything when in actuality baby steps are better than no steps.